When one thinks of France, you most likely envision Paris and its many splendid sightseeing attractions. But there is far more to France than the Eiffel Tower, the Louvre, Arc de Triomphe and Versailles Palace. France has some of the most beautiful villages, hamlets, bourgs, and townlets sprinkled throughout its stunning countryside. These quaint townlets still retain their original architectural charm, are steeped in history and culture and have a magical fairy tale ambience that leaves you breathless. These are the places that are often overlooked by tourists.

We’ve been to France several times and each time we seek out tiny villages to explore and adore. We’ve stepped off the beaten path and traversed to these hidden whimsical communities that stimulated our senses and capture our hearts. Here are a few of my family’s favorite townlets in France. 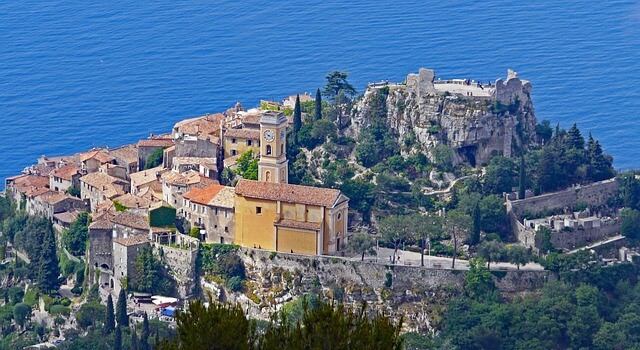 If you’re looking for heart-stirring views of the Mediterranean and French Riviera, swing by the medieval hillside village of Eze. Perched 14,000 feet above sea level, you’ll get a spectacular view of its gorgeous architecture and beautiful surroundings. Then wander through the narrow medieval cobblestone streets and get transported back to the middle ages. 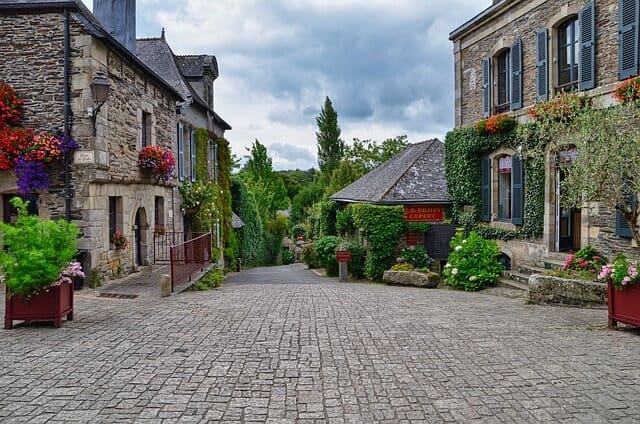 Rochefort-en-Terre is one of France’s most attractive villages. Filled with medieval architecture, cobbled streets, quaint shops, geranium embellished homes, well-manicured yards, and decadent treats, this place is a must-see. The Chateau Rochefort-en-Terre dates back to the 12th century but endured enormous damage throughout the centuries. It was purchased by painter Alfred Klotz in 1907 and restored to its original beauty. The castle and gardens are open to the public for free from May to September. 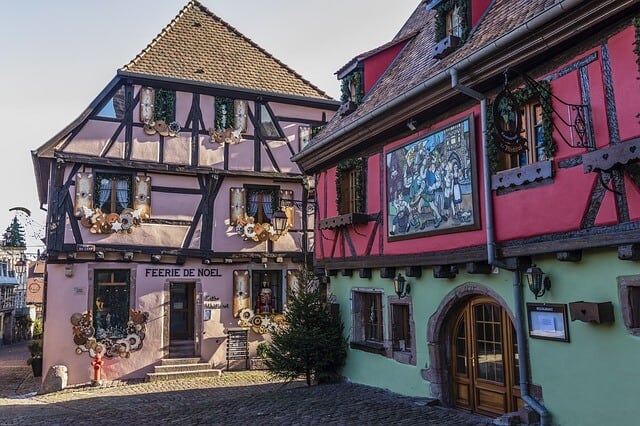 Riquewihr is an enchanting and romantic townlet that hasn’t changed one iota since the 16th century. Its layout and infrastructure have remained practically untouched and well preserved since the middle-ages. Its cobblestone streets are dotted with colorful half-timbered homes dating back to the 15th – 18th centuries. Riquewihr is also embellished with fountains and wells, quaint shops and aromatic flowers.

Nestled in the Alps Mancelles and founded by Italian monk Saint Céneri in the 7th century, the captivating townlet of Saint-Céneri-le-Gérei is a must-see. It’s home to an 11th-century church, a 15th-century chapel, and frescoes dating back to the 12th and 14th centuries. Surrounded by unspoiled beauty, it attracted artisans and painters year-round. 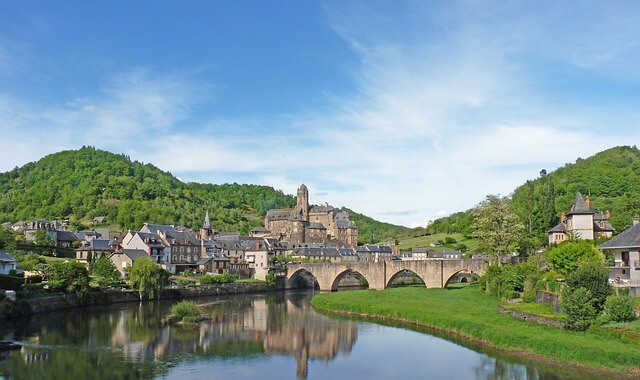 Considered one of the most picturesque places in France, Estaing is a charming well-preserved medieval village located in north Aveyron. With sloping cobblestone streets, narrow steps and a mix of Gothic and Renaissance-style buildings, you’ll be plunged deep in Estaing’s history. The Chateau was built in the 13th-century around a pentagonal dungeon and shaped throughout the centuries by generation after generation of the Counts of Estaing. And straddling over the Lot River is the notable Gothic bridge with its wrought-iron cross. It’s now classed as a UNESCO world heritage site. 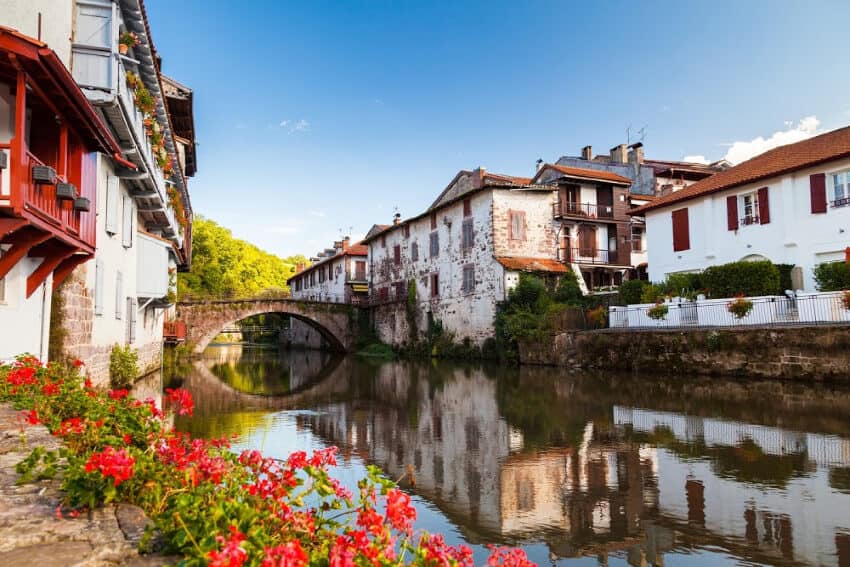 Situated at the base of the Pyrenees and along the Nive River in south-west France, the medieval townlet of Saint-Jean-Pied-de-Port began its life in the 12th-century. The king of Navarre refounded this village when he built an imposing fortress high in the hills in which all future homes were built around. Visitors can embrace the charm of this pretty village with its pinks sandstone walls, cobblestone streets lined with centuries-old decorated homes, the old bridge, and scenic facades along the water. 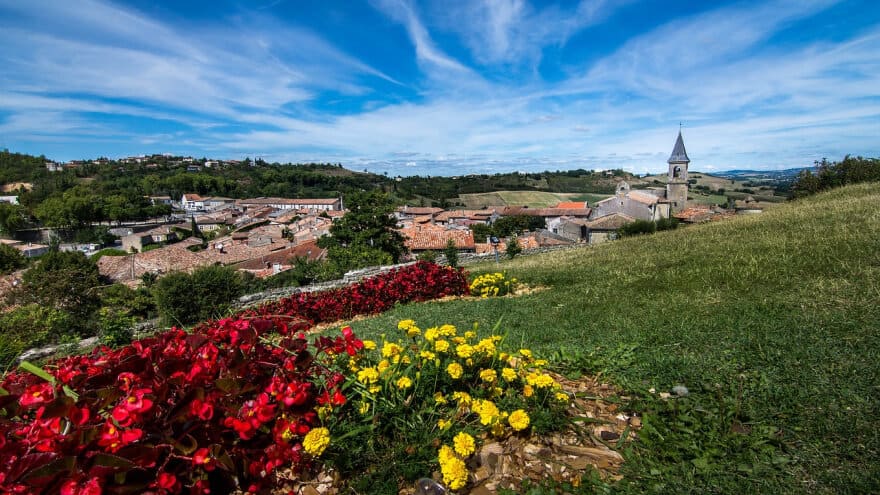 Lautrec is a quiet and tranquil little township in the Tarn countryside. This historic medieval village is adorned with half-timbered homes, cobblestone streets, and is well-known for being the home of artists Toulouse-Lautrec. It’s also known for growing pink garlic. Unique to this charming place is the 17th-century windmill built on a hill above.

Sorèze is a pretty little townlet that is located in the southern Pyrenees region. It’s infused with historic monuments and buildings like the 15th-century Abbey and Saint Martin steeple. It’s also brimming with half-timbered (corbelling) homes in which some of them feature an information board sharing once notable people who resided in them centuries ago. Other homes have underground arcades where everyday commerce is prevalent.

Saissac is a charming little townlet in the Aude region of southern France. Its 10th-century castle is ironically lower than the village, so tourists have to descend down a steep road to reach it. Although it’s a ruin, it was once the home of the powerful vassal family of Trencavel. It wasn’t until the citizens revolted from 1120 – 1124 that the cruel grip of the Trencavel family was severed and they were expelled from the village. 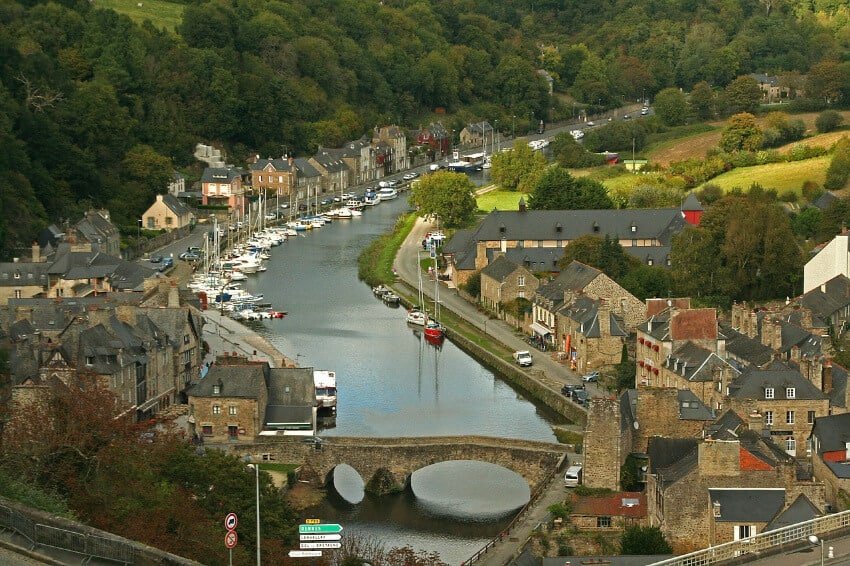 Dinan is a quaint medieval townlet that is in northwest France. It’s known for its cobblestone streets, half-timbered homes and medieval defensive ramparts. Their castle was built in the 14th-century and consists of a keep and 15th-century artillery tower known as the Tour du Coëtquen. You can also visit the Clock Tower and the impressive Saint-Malo Church with its magnificent stain glass windows.

Travel exposes you to different customs, cultures, traditions, and values. Placing ourselves in their environment allows us to see their humanness and the essence of what makes them connected to us in this beautiful world.