Whether you’re a novice or a pro in the kitchen, there are volumes of cookbooks on the market that will resonate with your interests. I love all kinds of cookbooks, but my passion is vegan recipes. More and more people are attracted to or curious about vegan meals and perhaps the lifestyle, so more cookbooks are popping up. I recently found a new cookbook that I think will appeal to a wide audience.

125 Best Vegan Recipes provides food preparers, from adults to kids, with a variety of appetizing recipes that will make time in the kitchen enjoyable. 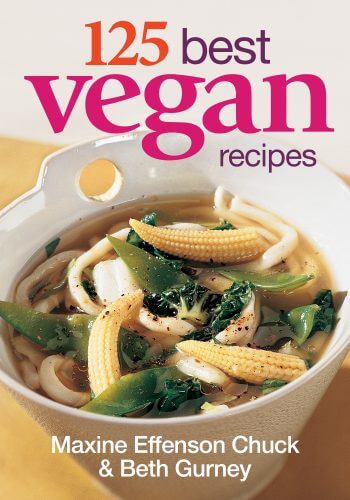 This cookbook begins with a tour through a vegan pantry, refrigerator and freezer. There’s also a section on cooking terms and techniques which the kiddo’s found quite helpful. The rest of the book in broken up into eight delicious chapters: Appetizers, Soups, Salads, Sandwiches & Wraps, Casseroles, Tofu & Legumes, For the Kids, Pastas and, Grains, Strictly Vegetables, and lastly Desserts and Baked Goods.

Each chapter has over a dozen mouthwatering recipes that are tasty, creative and super easy to make. We are huge hummus fans and the first recipe in the Appetizer chapter features Hummus with Roasted Red Peppers. I’ve never had roasted red peppers in a hummus recipe before, so this was my first one to try. Wow, the taste is divine and it works so great as a dip or sandwich spread too. Okay, I’ve never made Shepherd’s Pie before, so I thought this would be an appropriate time. It calls for a soy ground meat alternative, but my family doesn’t really care for it, so I used beans instead. It turned out awesome, the kids have even made it themselves as shown above.

Almost always, one of the first chapters we look through is the Desserts and all that are yummy recipes. The Peanut Butter Cookies were creamy, soft and so tasty; they literally melt in your mouth. The Banana Chocolate Chip Pudding Bread is beyond scrumptious. It’s great for a snack, dessert or even breakfast.

There’s also a chapter honing in on what Kids really dig eating. The Crispy Cinnamon Roll-Ups were so delicious and very easy to make. Several of the recipes offer an International essence that will encourage you to broaden your culinary tastes and skills with ease. We quite enjoyed creating a few of these savory, flavory, and heavenly recipes. The 125 Best Vegan Recipes Cookbook is a must for any kitchen.