Christmas is coming and the stores are bursting with the latest and greatest toys. One of the hottest toys on the market right now is the Disney Descendant Dolls twin pack. These dolls are fashioned after the characters featured in the movie Isle of the Lost! Who doesn’t love fairy tales, fantasy and magic? We all do! Whether benevolent or evil, we form an attachment to the characters. This year Hasbro has created some cool Descendant toys for the holiday season, and every little girl wants them.

I received the dynamic dual couple, Ben and Mal who are holding hands in the box. Mal is the daughter of Malificent and Ben is the son of Belle and the Beast. Both characters are wearing some impressive threads. Mals dress is lacy, elegant and several shades of purple which match her funky hair. She’s also donning some really cool gold pumps with purple toes, and wings on the back of them. Ben is wearing a modern version of a regal denim outfit, a gold crown, and he’s holding a red rose for this beloved. Both dolls have movable limbs at the wrist, elbow, shoulder, and knees.

Carlos is the son of Cruella DeVil, and Evie is the daughter of the Evil Queen. Evie is a gorgeous barbie size doll, with a mischievous yet playful grin. She’s got lots and lots of blue hair with black streaks, and a cute braid in front. Carlos is the mirror image of his mom. He has spiky two-tone dark and white hair and a pleasant countenance. He’s wearing a red, white and black bomber jacket with a two-tone fur collar and crossbones on the back. 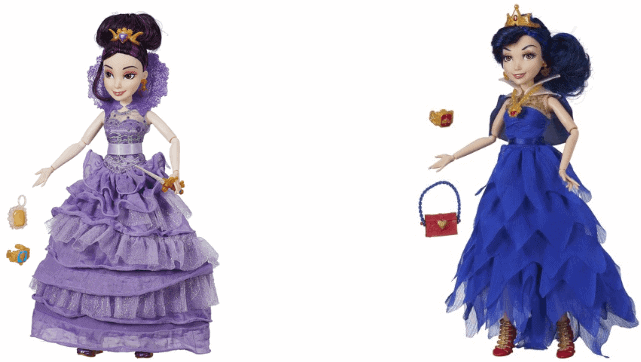 The Descendant dolls are also available individually and sold in most retail stores. The packaging in itself attractive; the front has a magical background behind the dolls and the back features the actors playing these roles. If the Descendant dolls are on your child’s wish list, the store shelves are lined with them. The kiddo’s my family adore these dolls and just can’t seem to get enough of them. Happy Holidays!