I’ve had a love affair with Switzerland for several decades and I don’t see that changing anytime in the future. I’m in love with the breathtaking Alpine landscape, enchanting and historic villages and the numerous scenic and tranquil lakes sprinkled across the country.

The medieval city of Lucerne, Switzerland is a very popular tourist destination and one of my utmost favorite places to visit along Lake Lucerne. Lucerne is a great place to make as your base as you travel about and take the various excursions offered.

But, before you hop on a train or boat to sightsee, there are numerous places to see in Lucerne itself. Some must-see places are the Chapel Bridge – Europes oldest wooden bridge, Aldstat (Old Town), Musegg Wall, Lion Monument, Richard Wagner Museum, Château Gütsch and don’t forget to sample some cheese at the Chäs Barmettler. Other things to do are shopping in the Muhlenplatz, strolling along the boardwalk or just sitting on one of their many benches and take in the magnificent views. I wrote more about Lucerne’s highlights here. 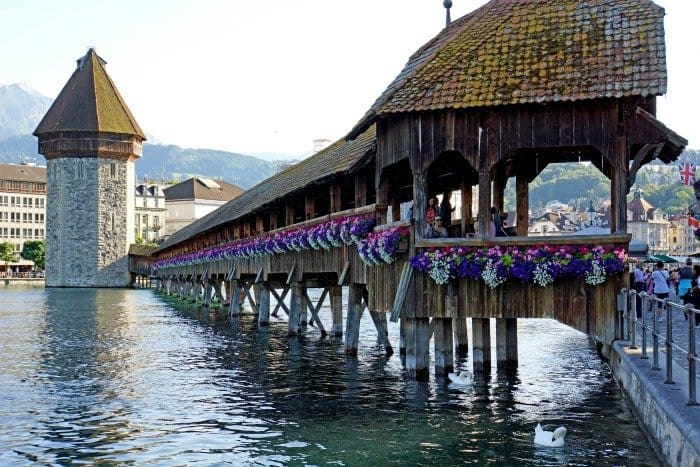 Lake Lucerne is the fourth largest lake in Switzerland, and along with Lucerne, it’s home to several other charming little villages that get overlooked quite often in the bustle of tourism. It’s time to give homage to these picturesque portals that graciously punctuate the prettiest lake ever. 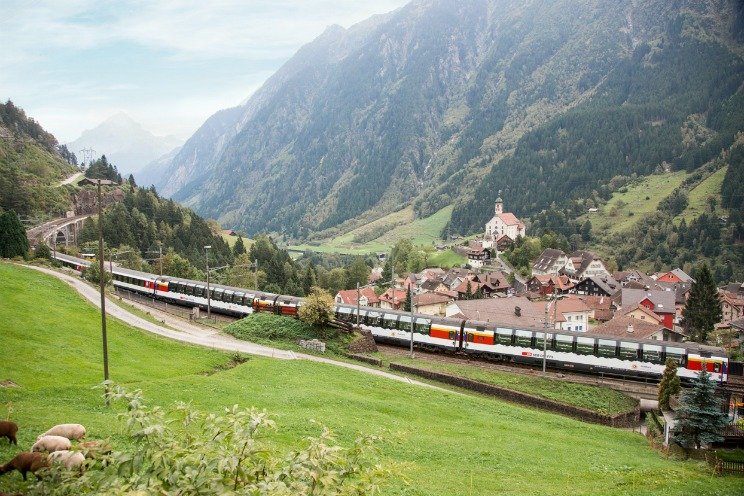 A great way to travel through Switzerland is jumping aboard the Gotthard Panorama Express — William Tell Express. It’s a 5 hour trip of a lifetime that offers two means of travel. It’s a panoramic train – the Gotthard Panorama Express and boat – the William Tell Express line that connects Lucerne to Lugano as it crosses the Swiss Alps from north to south. There are other local charter boats that will take you on a tour around Lake Lucerne as well. 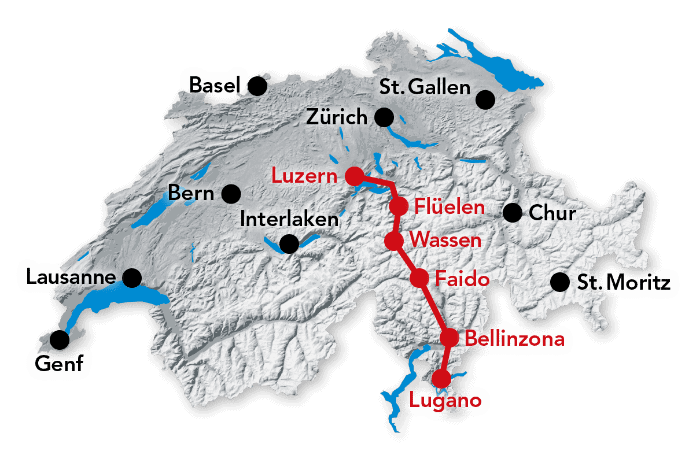 Board the train in Lugano and enjoy the spectacular scenery along the way to Lucerne. Once the train reaches Flüelen, you’ll get off here for the next part of your adventure. Flüelen is a main connecting point for buses, trains and boats going to various destinations. It’s here that you will board the William Tell Express, a historic steamship paddleboat that has been restored to its original glory, for an enjoyable and relaxing 3-hour tour en route to Lucerne. Both the train and steamboat offer 1st and 2nd class seats, but only the 1st class seats offer panoramic views. The ship has a restaurant and snacks are available on the train. But first, a little about Flüelen.

Flüelen is a pretty little harbor hamlet that’s surrounded by lush mountains and panoramic scenery. It offers quaint surroundings and a few leisure attractions. Their main attraction, the tiny Rudenz Castle, resides in the center of the village for all to admire. Built in the 13th century, the castle went through several owners before it became the property of the municipality of Flüelen.

The tower and outer stones were meticulously repaired in 1931 by skilled craftsmen. The castle has eleven rooms which include a great hall, a spacious kitchen, bedrooms and several cellars. Since 2005 the castle grounds have been used as a public park and the great hall is open for local events. 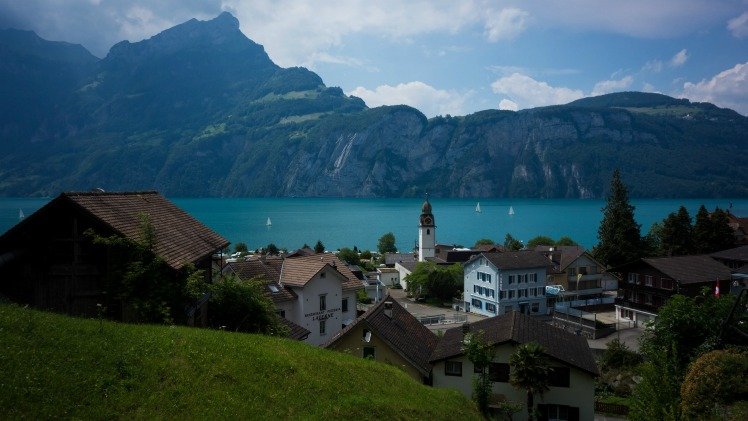 Sisikon is nestled on the upper shores of Lake Lucerne. This pretty little village offers a superb view of the pristine lake and breathtaking mountains. It’s also linked to the heroic tale of William Tell. The bailiff Gessler was the one who forced William Tell to shoot an apple off his son Walter’s head using a crossbow. Tell Chapel and Tellsplatte is where William Tell supposedly sprung from his captor’s boat during a storm and landed on the shores of Lake Lucerne. He then shot his oppressor Gessler and so the rebellion started. William Tell’s simplicity, modesty, drive and desire for freedom are what helped shape the Swiss self-image to an enormous degree. 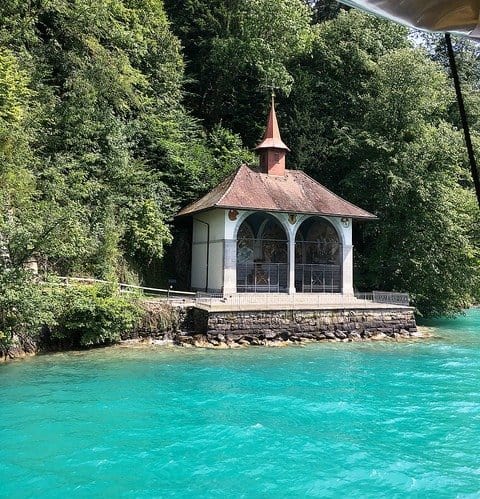 Built in 1879/1880 the chapel was lovingly decorated with four illusionistic frescoes painted by Swiss artist Ernst Stückelberg. The frescoes depict (1) The Oath in Rütli, (2) the Apfelschuss, shooting the apple off of his son’s head, (3) the “Tellsprung” – Tell’s jump to freedom and (4) the death of Gessler in the Hohlen Gasse. Mad King Ludwig was so enamored with the story of William Tell that he wanted to build a giant statue of him on this location in the water. Every year thousands of tourists make the pilgrimage to this historic site.

Sisikon can also boast having the largest glockenspiel in Switzerland. It was built in 2001 and symbolically placed just above Tell Chapel. It consists of  37 bells that range in tones e1 to e4. It chimes several melodies on the hour for 10 minutes starting at 9:00 am to 7:10 pm.

The area is also great for hiking, biking, camping, boating, swimming and waterboarding. You can also take several excursion or explore the area on foot. 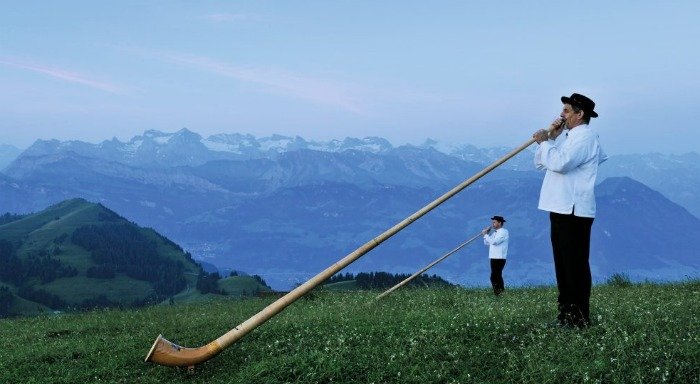 Rütli Meadows is called the cradle of Switzerland and the Swiss take great pride in little village. It’s here according to legend, that three members from the founding cantons of Uri, Schwyz, and Unterwalden united to become a confederacy in 1291. They took the oath of Rütlischwur and vowed to protect each other from the then threats of Austria. It was a historic and legendary turning point in the Swiss’s pursuit of independence. August 1 is Swiss National Day and the oath is re-enacted to commemorate this historic Swiss moment.

There are lots of outdoor activities to explore in Rütli from hitting the Swiss Path hiking trail that’s 35 km long to gliding gracefully along its still waters. The hiking trails are all well marked according to degrees of difficulty and length of the trail. There are several easy to finish trails that offer a leisure walk and expose you to lots of fresh air and breathtaking scenery. There’s a trail for all nature lovers. 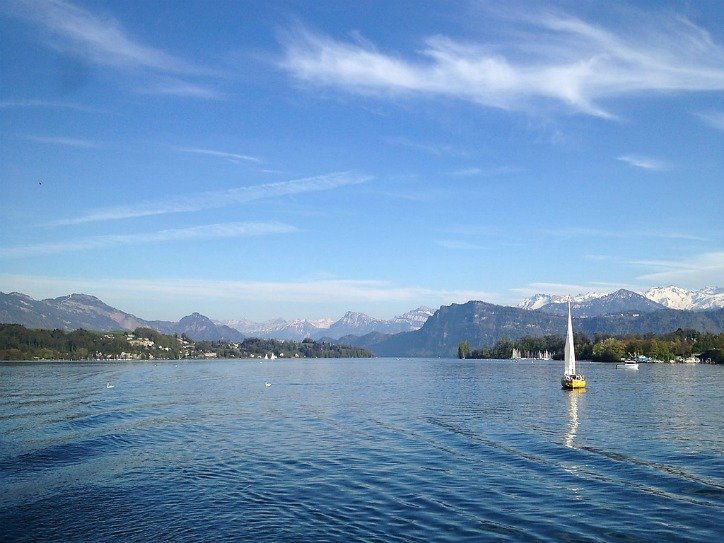 Vitznau is a striking 1000-year-old town that hugs the shores of Lake Lucerne. It’s a popular vacation destination for those you love to embrace the great outdoors and are aching to explore some enchanting lakes and thundering mountains. It’s a good starting point for numerous excursions around the lake or hiking treks that take you up the spectacular peak of Mt. Rigi. Or maybe you’d like to relax and take a cable car to Hinterbergen. It’s also a great place to escape the din of everyday life. Just laze on the shore, tune out the world and take in the ambience. 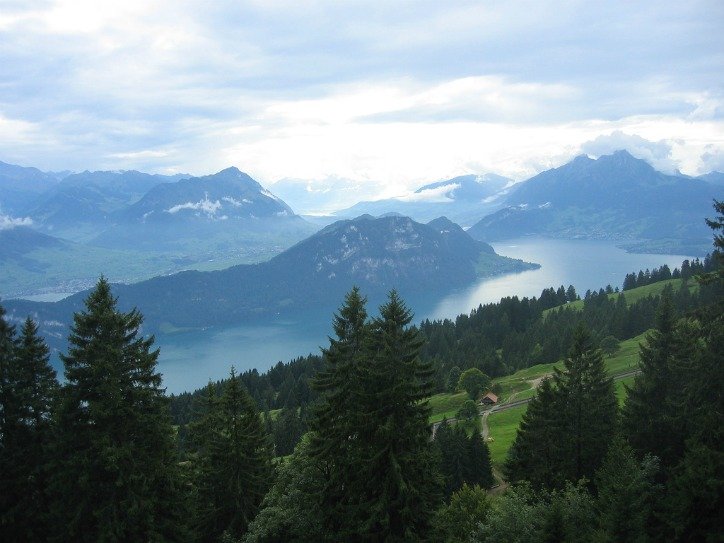 Weggis is a postcard-perfect holiday resort that lies along Lake Lucerne. It offers tranquillity, relaxation and a chance for undisturbed peace in front of a beautiful lake with a panoramic mountain background. The promenade in the heart of Weggis allows you to take a lakeside stroll surrounded by its mesmerizing and paradisic scenery. It’s so entrancing you wish it would never end. 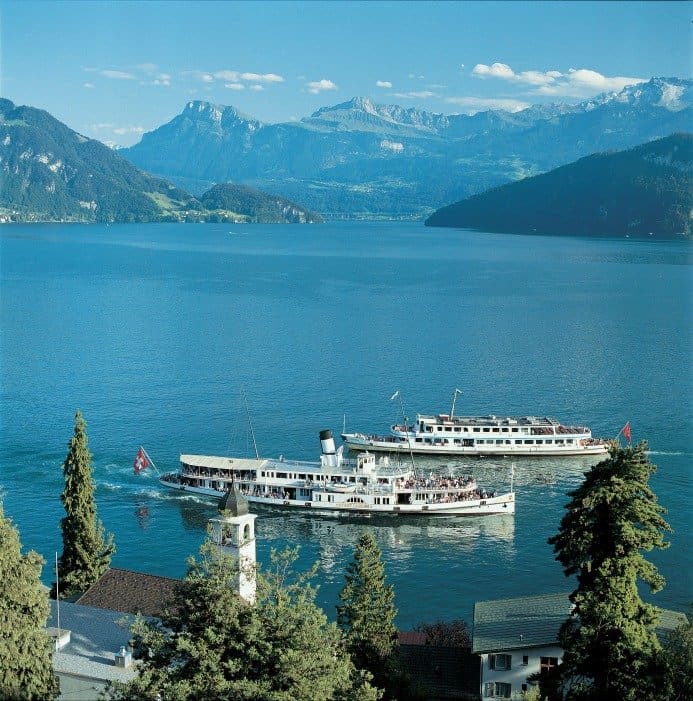 Mark Twain loved Weggis. He stayed during there during the summer of 1897 and called it “the charmingiest place he had ever lived in for repose and restfulness… We shall always come here for the summers if we can.” He also penned “Sunday in Heaven is noisier compared to this quietness.” Mark Twain used to sit under a big oak tree, so the town built a monument in honor of him. In 2010, one hundred years after his death, the town inaugurated a Mark Twain trail.

Personally, I find that the smaller hamlets, villages and towns evoke the biggest emotions and instill the deepest memories. They capture the honesty of the area and are uninhibited by their larger neighbors. They don’t care so much about tourism as they do about humanism. I love Switzerland.