Angles-sur-l’Anglin is a small tranquil yet captivating village in the Nouvelle-Aquitaine region in western France. Every nook and cranny offers you an invitation to take in the medieval atmosphere. Experience Anglin’s ancient history as you stroll down the quaint and romantic streets. The history of Angles-sur-l’Anglin, or rather of the ‘Town’ of Angle-surl’Anglin is naturally linked to its region, the Poitou. It nevertheless created its own identity— an identity to which its inhabitants are deeply attached.

Situated at the crossroad of Poitou, Touraine, and Berry, Angles has known through centuries, how to make the most of its geographic position in order to both take advantage of a mix of different cultures and at the same time to become an exceptional entity in its own right.

The origin of the village seems to raise a lot of controversies. Modern tourist guides favor the thesis that Angles owes its name to a group of Germanic people originating from Schleswig — a German land of the Northern plain, the Angles — whose descendants would have settled near the Anglin in the 7th century.

Whatever its origins, civilization left its mark on Angles long before the Germans, as we can see with the discovery of a Magdalenian prehistoric site at ‘Roc aux Sorciers’. This is an astonishing testimony that Palaeolithic man lived in caves and rock shelters on the banks of the river Anglin some 14000 years ago. Legend has it that witches gathered in these caves as well. Although the public is not permitted in these caves, a large interpretation center opened that will take visitors back to the end of the ice age and into the caves of French ancestors with computer and laser technology.

The Angles-sur-l’Anglin area is made up of two distinct parts:

♥ La Cave Taillebourg, also called Lucien Jacob’s cave, whereas early as 1927 Monsieur Rousseau discovered traces of Middle Magdalenian. In 1947 Madame de Saint-Mathurin and Madame Garrod resumed the excavating of the cave and discovered the relief of a bison;
♥L’abri Bourdois (shelter) where Mademoiselle de SaintMathurin and Madame Garrod opened a trench that led them to the discovery of the Magdalenian sculpted frieze.

The Chateau Angles-sur-l’Anglin was mention as early as 1025 and was no doubt built above the Angles’ cliffs because of the strategic position they offered (they rise some 50 meters above the Anglin Valley). It was bought by Bishop Guillaume de Bruges from the Lezy family at the end of the 13th century and remained the property of the bishop until the revolution.

Fast-forwarding to the early part of the 15th century where two bishops graciously undertook the massive job of rebuilding the old fortress. The keep and vault were constructed in the 12th century, but in the 15th century, the keep was altered for Bishop Hugues de Combarel who also built the new castle. His successor Guillaume de Champagne continued on with the restoration work. 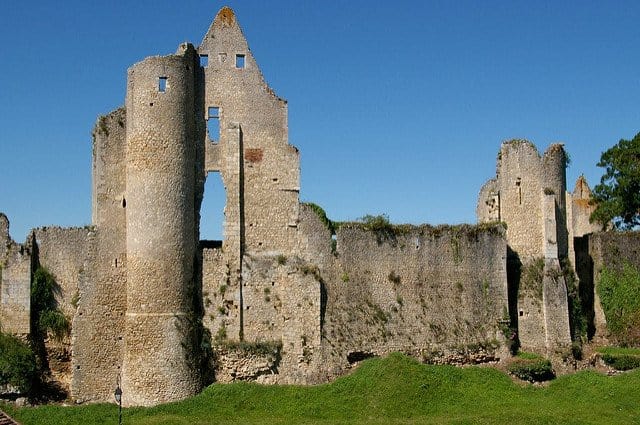 The end of the 15th century heralds the end of the fortress’ heyday. Pierre d’Amboise has the episcopal residence of Dissay built, which is favored over the castlery of Angles —then followed the religious wars, the Fronde. In 1708 an assessment of the condition of the fortress is ordered. The Paris Parliament exonerates the Bishops of Poitiers from their duty of maintenance.

In 1792 the fortress, although then in ruins, is nevertheless confiscated and the local council decides to use it as a stone quarry. But access is difficult, demand is low, so the ruins were saved. In 1926, the Chateau Angles-sur-l’Anglin was listed as a historic monument by the French Ministry of Culture. The present local council bought the fortress back for a symbolic 1 franc in 1986, and have since been working at safeguarding it ever since.

The abbey originates circa 1040 and in 1088 Hugues VI de Lusignan offered the church to the Abbey Saint- Cyprien of Poitiers. Around 1094 Pope Urbain II had the Benedictine monks replaced with regular canons of the Saint-Augustin order, who held the abbey until the French Revolution.

The abbey church was erected at the end of the 12th century in 1175 and was consecrated in 1192 under the reign of Philippe Auguste. The abbey soon prospers with numerous donations and exchanges with the abbey of Merci-Dieu.

However at the end of the Hundred Years War, in 1428, resources had dwindled so much so that only 10 of the 24 monks remained. In 1768, towards the end of Louis 15th’s reign, only 5 monks remained. During the Revolution, the canons’ houses were sold as State assets to private buyers, but the abbey remained State property but sadly no one maintained it.

Chapelle St. Pierre was erected in the 12th century on the highest point of the cliff, and the remains of a feudal mound can still be seen today. The chapel is separated from the fortress by the ‘Tranchee des Anglais’ (The Trench of the English): a crack developed by man. It’s said to be cut by soldiers trying to reach the chateau. Bertrand du Guesclin would have taken the chateau back from the English through this passage.

The present chancel is in the shape of a quarter circle because the original one collapsed with the cliff during the 15th century; it was roughly rebuilt on a new cliff edge. At present, the chapel hosts numerous exhibitions and offers one of the best viewpoints of Angles.

As you experience and explore France, every little village you chance upon will take your breath away and you’ll be inclined to think it’s the most beautiful in the country.