Belgium, a beautiful country in Western Europe, is known for its quaint medieval towns, Renaissance architecture, and natural landscapes. Just a few kilometers from the North Sea coast is the fairytale city of Bruges.

Belgium’s capital is the beautiful city of Bruges. It’s distinguished by its well-preserved canals, cobbled streets, romantic buildings, Flemish masterpieces, and its rich culture. Its port, Zeebrugge, is an important center for fishing, European trade, and fleets of cruise ships. 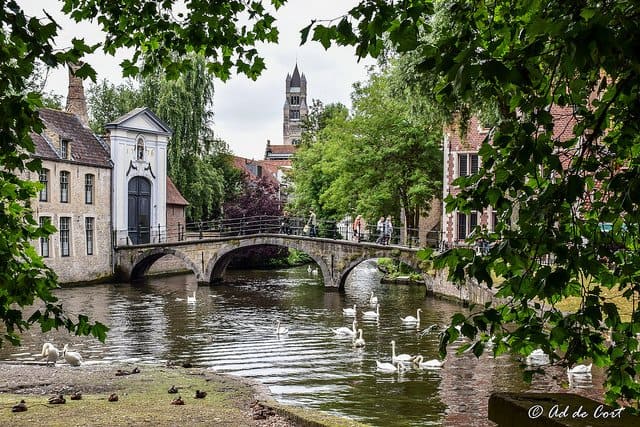 The name Bruges comes from the Viking word for wharf, so it’s been a trading center for a long time. About 1000 years ago this city grew wealthy as the most important textile market in Northern Europe. Back then, the canals provided merchants with smooth and accessible transportation. Today, the canals provide visitors with smooth and scenic tours.

With all it’s charm and romantic influence, there is no shortage of impressive sights to behold while visiting Bruges. Here are some popular tourist attractions.

Cruising through Bruges’ 27 miles of canals is a must. Drift leisurely through the remarkable city arteries, and you will discover secret gardens, picturesque bridges, and postcard-perfect panorama. 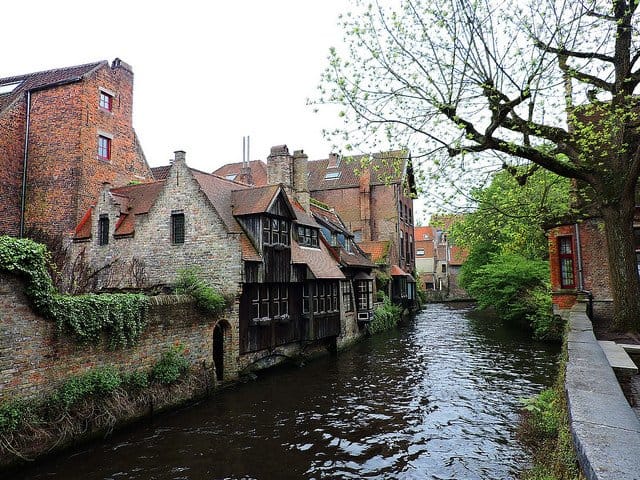 You get a different perspective traveling by boat; the views are even lovelier and you can tangibly feel its medieval atmosphere. You’ll feel like you’ve been transported back in time many centuries. In essence, you have. 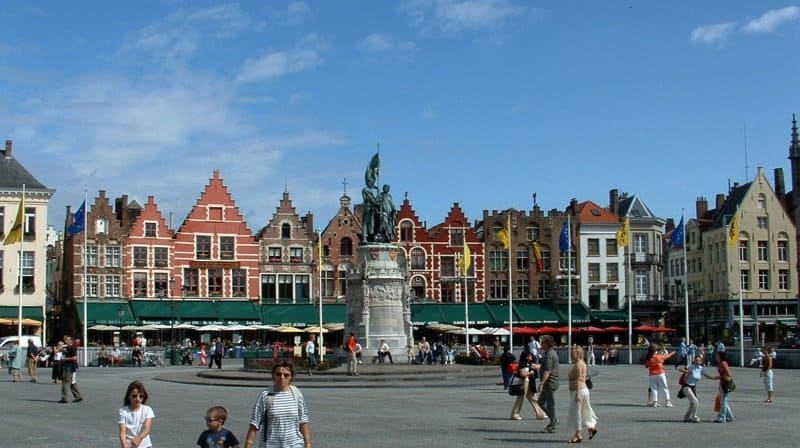 The Market Square is ringed by patio restaurants, old gabled buildings, and their famous bell tower. It reflects how little the city center has changed since its medieval days. While in the Market Square, enjoy their divine chocolate, fries with mayonnaise, fruit-topped waffles and some monk-made beer.

Standing over the Market Square since 1300, the Bell Tower is the cities most prominent landmark. If you’re up for it, climb the narrow and steep 366 steps to the top for a breathtaking view of the city. In the belfry, you’ll also find a grand Carillon, which allows the melodic bells to be played via a hand and foot keyboard. Visitors and locals alike can sit on one of the benches in the courtyard and savor the regular and free carillon concerts.

Dating back to 1376, Bruges City Hall is one of the oldest in all of the Netherlands. It is located in the heart of the market where the former fortified castle was built. This Hall has served as a government building where it has ruled for more than 600 years. The Gothic Hall is an absolute masterpiece with its late 19th century murals and polychrome vault. Although there have been several extensions over the centuries, it’s maintained a palatial beauty.

Basilica of the Holy Blood

Also housed in the opulent Bruges Square is 6 centuries of fine architecture. Built between 1134 and 1157 by the Count Diederik van de Elzas, the historic Basilica of the Holy Blood is a popular tourist attraction. According to the legend, the Count brought the Holy Blood of Jesus Christ to Bruges from Jerusalem. Since the 13th century, the relic of the Holy Blood has been kept in the chapel.

The Rozenhoedkaai (Rosary Quay) is the most photographed spot in Bruges. It links the Belfry with the cities network of canals and offers a delightful panoramic view.

The Groeningemuseum is a civic museum built on the site of the once medieval Eekhout Abbey. It’s home to six hundred years of Belgian and Flemish beautiful masterpieces from Jan van Eyck to Gerard David. This includes Renaissance, Baroque masterpieces, expressionism and many more.

Bruges can boast having many chocolate shops and a historical museum dedicated to this decadent treat. The Choco-Story museum is housed in the 3-story Maison de Croon which was built in 1480 as a tavern and later became a pastry shop.

They take their chocolate very serious in Belgium. It’s an art and a craft and takes skill to masterfully blend the right formula of great-tasting rich, smooth chocolate. Touring the museum, you’ll be educated on the fascinating health facts about the cocoa bean and it’s remarkable history. Plus, you’ll learn how chocolate has been turned into delicious confections and drinks. Did you know that Louis XIII’s wife, Anne of Austria, made drinking chocolate all the rage in 1615? To this day, hot chocolate is enjoyed by people around the globe. Wait, it’s not over. You’ll also get to taste and savor some handmade chocolate delicacies during the tour.

Don’t forget to swing by one of the many aromatic chocolate shops and pick up some treats for yourself and your loved ones back home. What a great way to end a pleasing day in Bruges.