Growing up, our living room was punctuated with a variety of festive Christmas cards conveying sentiments and good wishes during the holiday season. I loved looking at the whimsical images that sparkled and glowed; they added a special feeling to the holiday atmosphere. Today, it’s rare to get a card in the mail. Last year I sent out dozens of cards and I didn’t even get one in return. I kinda have an emotional attached to Christmas cards, it’s always been part of my holiday tradition. My eyes pool with sadness as I realize it’s becoming a dying tradition.

Born in 1843, the very first Christmas cards were commissioned by Sir Henry Cole and illustrated by John Callcott Horsley in London. The central picture showed three generations of a family raising a toast to the card’s recipient: on either side were scenes of charity, with food and clothing being given to the poor.

Interestingly enough, early Christmas cards rarely showed winter or religious themes but instead favored more whimsical images like flowers, fairies, and other fairy tale designs that featured the welcoming of spring. Also popular were humorous and sentimental images of children and animals.

Christmas cards became very popular around 1860 and more elaborate designs were created. Nativity scenes, Charles Dickens images, Victorian scenes, and snow scenes were popular and sales skyrocketed. Even though Christmas cards appeared in the U.S by 1840, many could not afford them.

At Christmas 1873, the firm Prang and Mayer began creating greeting cards for the British market and then began selling the cards in America in 1874. Using the chromolithography process of printmaking, they were producing over five million cards a year by 1880, but they were costly. However, less expensive Christmas cards were produced by other companies so they were affordable to the public, and Prang went out of business. 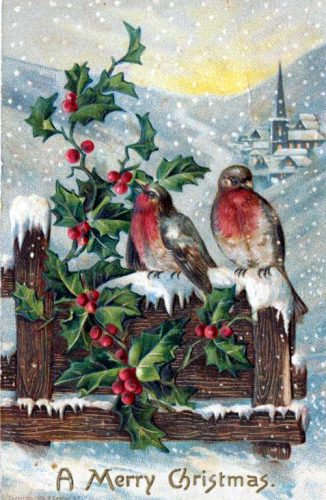 In the 1910s and 1920s, homemade Christmas cards became popular. They featured treasures from home, like ribbon, button, foil, lace, and were often unusually shaped. These were usually too delicate to send through the post and were given by hand.

Today, Christmas cards are mass-produced by millions of companies. They feature a variety of images and scenes that reflect the holiday season. But fewer and fewer people are mailing them out. Some quit for eco reasons, but you can buy cards made from recycled paper – or you could make your own. Others share that the cost of postage is too high — you’re looking at about a dollar per card. Others quip that they don’t have the time to write a few lines on a card, toss in a photo and mail it. Really!

Many today, send virtual cards or text or a video greeting. But to me, we lose the humanism, the warmth, the love that goes into sharing a Christmas card.

There are sites where you can create your own Christmas cards. Upload family photos, choose your format, colors, and text and they’ll ship them to you. There are still a plethora of Christmas cards on the market from cheesy to cartoonish to funny to scenic to festive. There’s something for everyone.

Sending out Christmas cards is thoughtful. It’s a time when we sit and think about other people and wish them well for the coming year. It’s a chance to sprinkle joy in someone’s life and catch up on their lives and reminisce about old times. Please don’t let the tradition of sending Christmas cards stop! I won’t! Happy Holidays!