The Netherlands is one of the prettiest countries in the world. It’s hallmark windmills and colorful tulips make it a popular destination for tourists. The Netherlands has twelve provinces: Drenthe, Flevoland, Friesland, Gelderland, Groningen, Limburg, North-Brabant, North-Holland, Overijssel, South-Holland, Utrecht, and Zeeland. Each province has its own unique charm and character plus offers diversity in landscape and nature.

The province of Holland draws in copious visitors from all around the world, but many do not realize that there is actually a North and South Holland. North-Holland is home to the ever-popular city of canals, Amsterdam, and its provincial capital city of Haarlem. 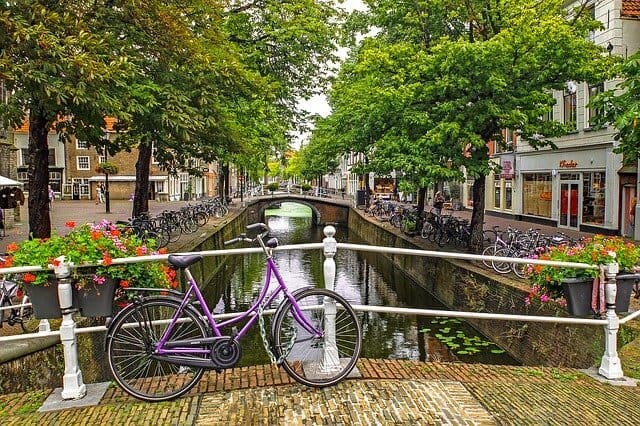 South Holland is home to popular locations like Leiden, The Hague, Rotterdam, and Delft. Delft is a canal ringed city, situated between Rotterdam and The Hague, thus making it also a popular tourist attraction and base for visiting other cities and towns in the area. If the name sounds familiar, it could be because it’s world-renown for its hand-painted blue and white Delft pottery.

Delft started out as a small rural village along a canal in the early Middle Ages, but it soon flourished into a thriving city when it received its charter in 1246. William the Orange – also called William the Silent – took up residence in Delft in 1572 when the city had large defensive walls and served as a protected headquarters. Invading the city would be rough, as some areas of the wall were covered with a thick growth of tangled hawthorn bushes, while other parts had a palisade of sharp stakes. Either way, it would be brutally painful to climb the wall.

As the Prince of Orange, William was the first leader in the Netherlands. During the Dutch rebellion, he played a vital role against the Spanish in the Eighty Years’ War. And in 1581, Delft was declared the capital of the newly independent Netherlands after the Act of Abjuration was announced.

But William’s triumph and joy were short-lived. When he converted to Protestantism, the King of Spain offered a handsome reward to anyone who would assassinate Willaim. On July 10th, 1584 William was shot to death in his own house in Delft by Balthasar Gerards. Gerards however, never got to spend his reward money. He was quickly tried, convicted, and gruesomely executed on July 14, 1584.

Delft is also remembered as the birthplace of master painter Johannes Vermeer and scientist pioneer Antony van Leeuwenhoek. It’s also recognized for its University of Technology which was founded as an academy for civil engineering by King William II in 1842.

Today, Delft is a vibrant city that is home to just over 100,000 diverse people, impressive architecture, historic buildings, and lots of quaint bridges and charming canals. There are plenty of sights to see in the city itself and in the surrounding areas that will allow you to experience Holland at its best. 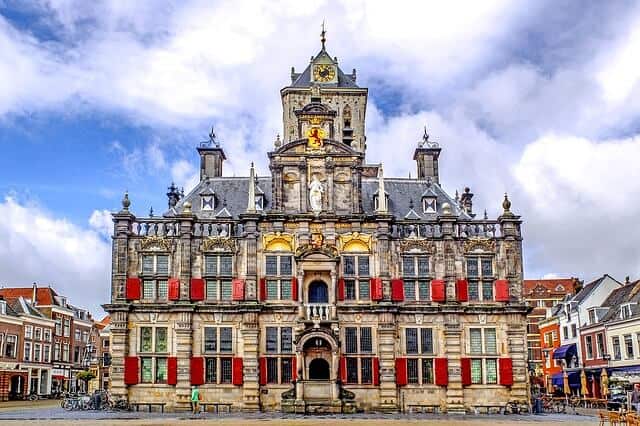 The original Delft City Hall was destroyed in a fire in 1618 and Dutch architect Hendrick de Keyser was asked to design and build a new one. Today, it bears a Renaissance complexion after been extensively altered throughout the ages and then being completely restored in the 20th century. One wonders what it originally looked like. Its red shutters date back to 1618-20, while the belfry behind is much older and adored in costly Belgian limestone. It was formerly a seat in the city’s government, but today offers civic wedding ceremonies.

The city of Delft has produced its world-renown Delft Blue earthenware since the 17th century. Between the years 1600 to 1800, this hand-painted pottery was only available to wealthy families, but thankfully that has changed. What’s unique about Delft Blue is that after it’s been fired, it’s clay is coated with a tin glaze giving them that vibrant blue. 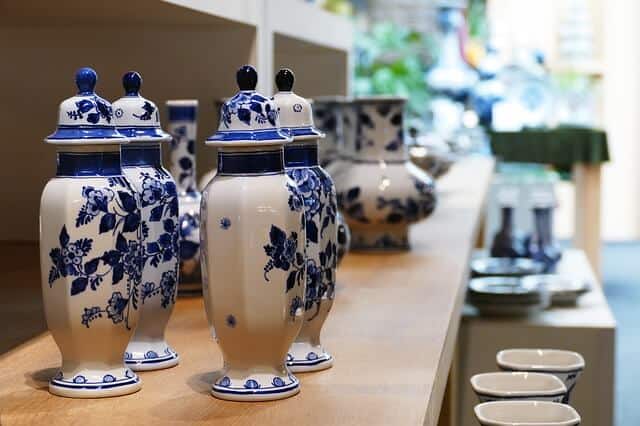 Delft Blue has achieved and maintained unrivaled popularity for centuries, but sadly there is only one remaining Royal Delft factory. 2018 marked the 365th anniversary of Royal Delft and to celebrate, starting from 1 January 2018, every day one visitor will be asked to be part of this craft by contributing to the painting of a unique tableau.

Royal Delft will traditionally open its doors on November 17 and 18 where during the entire weekend, they offer walk-in workshops at competitive prices and the entrance fee is free. Aside from pottery, they also sell hand-crafted jewelry, tiles, home accessories, and even Delft Blue wallpaper, but it’s pricey. If you like, you can also take a workshop to learn how to paint tiles, plates, or vases. 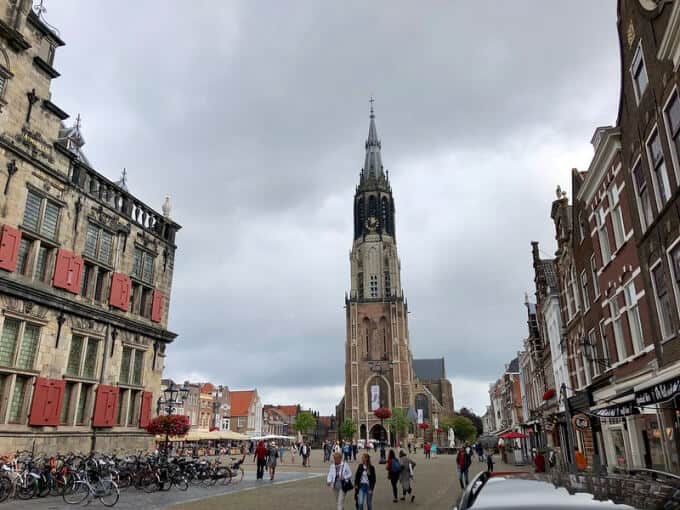 The Nieuwe Kerk (New Church), formerly called St. Ursula, is a magnificent gothic style church that resides peacefully in the Delft Market Square opposite the City Hall. It dates back to the 1381 and during the Reformation, it was remade into a Protestant church – hence its name, the New Church. It’s here where William the Orange was entombed in a mausoleum. Since then, all members of the Dutch Royal have also been entombed in a Royal crypt. You can also climb to the top of the Church Tower where you can behold and enjoy a spectacular view of Delft and the surrounding area. 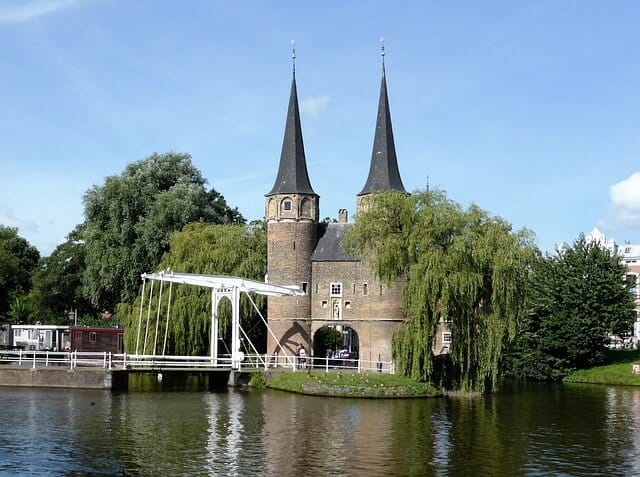 The enchanting fairytale-like Oostpoort – Eastern Gate was built around 1400. In 1510, the towers were enhanced with additional conical spires and an octagonal floor. At one time there were eight main gates, but very sadly, they were taken down in the 19th century, so the Eastern Gate is the only remaining one left. 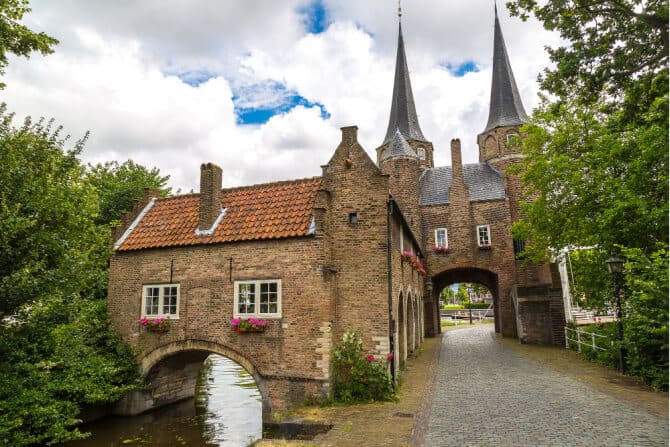 Between 1962 to 1964, the Eastern Gate endured an extensive restoration and was transformed into two apartments, but was later merged together to create one larger home. How cool is that to have a home above the only gate in Delft? Oostpoort is open to the public 24/7 and serves as an art gallery and private residence. Just to clarify, the apartment is not available for any visitors because it’s a private home, however, the ground floor offers an interesting exhibit gallery open for public viewing.

Museum Prinsenhof Delft was built in the middle ages as a monastery and later served as a residence for William the Silent. In 1572, when William of Orange moved into the Saint Agatha cloister, he chose to rename it the Prinsenhof.

It’s here that the assassination of King William of Orange took place. On 10 July 1584, Balthasar Gerards shot the king as he was making his way to his office. Fast forward to 1911, and Prinsenhof was established as a museum where visitors can view a collection of Dutch Golden Age paintings and see the bullet holes in the wall even today. 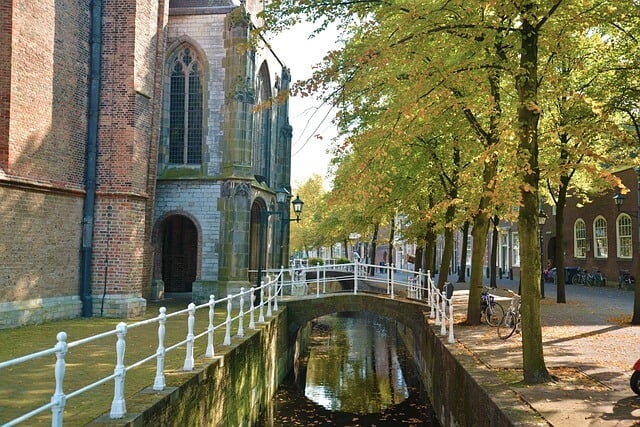 Just like the windmills, canals are iconic hallmarks of the Netherlands. Canals or grachten, as they are called, have been an integral part of Dutch history. Going back several hundred years, the canals were essential for both daily life and merchant trading. During the past 750 years, the city has grown around their oldest canal known as Oude Delft. Throughout the centuries, many other internal canals were created as necessary passages to get around the city.

Today, Delft is intertwined with many kilometers of picturesque and romantic waterways adorned with lovely little bridges. The locals are very proud of their canals and use them to get around on their private boats or via water-taxi. If you’d like to experience the ambience and charm of beautiful Delft, a leisurely boat ride along the serene canals is a great way to experience the charm of beautiful Delft.