Disney’s Descendants is a musical fantasy about the peaceful inhabitants of the United States of Auradon. Ruled by King Beast and Queen Belle, they made sure all villains and their associates were imprisoned on the Isle of the Lost, behind a barrier that prevents the use of magic. Many years later, their son Ben is to take over the crown, and his first decision is to invite four teenagers from the Isle of the Lost to attend his school, Auradon Prep. Oh dear, what has he done! But, not all is evil in the Isle of the Lost!

Who doesn’t love fairy tales and fantasy? We do! Whether benevolent or evil, we form an attachment to the characters. This year Hasbro has created some cool Descendant toys for their faithful fans. The packaging in itself attractive; the front has a magical background behind the dolls and the back features the actors playing these roles. 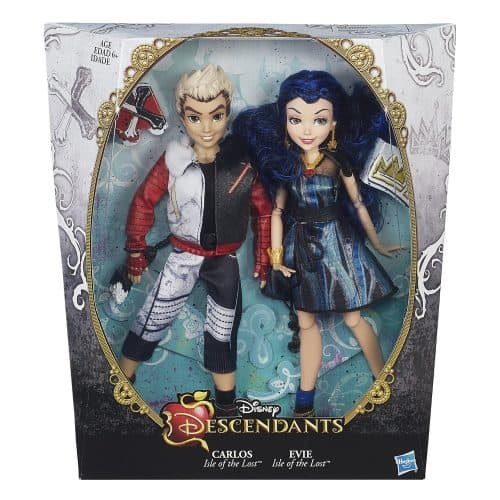 Carlos is the son of Cruella DeVil, and Evie is the daughter of the Evil Queen. Evie is a gorgeous barbie size doll, with a mischievous yet playful grin. She’s got lots and lots of blue hair with black streaks, and a cute braid in front. Evie dons a stunning and hip outfit; the dress has lots of zippers on the fabric, and it comes with a long fashionable belt and a removable capelet. She also has some cool jewelry; a heart pendant, crown earrings, and a gold crown bracelet. Evie is also rocking a pair of fashion boots with chains and a crown charm. She’s awesome! 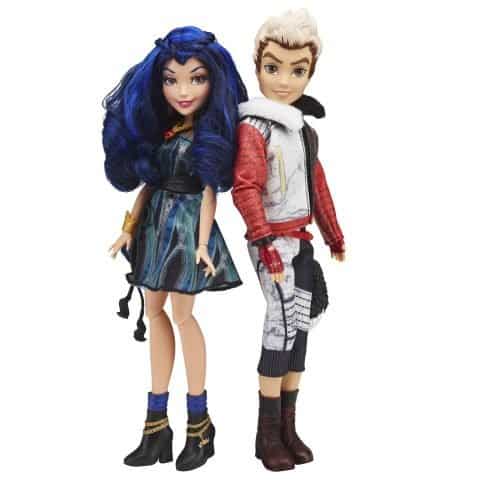 Carlos is the mirror image of his mom. He has spiky two-tone dark and white hair and a pleasant countenance. He’s wearing a red, white and black bomber jacket with a two-tone fur collar and crossbones on the back. The jacket is removable, and he’s got a black tank top underneath. Carlos has cool fingerless gloves and a huge animal tail around this waist. He’s got cropped pants and ankle-high boots.

The Evie doll has all movable joints, whereas Carlos’ wrists do not move. That’s kind of a bummer, but the rest of him moves, and both dolls are poseable. Each doll comes with super cool fashion accessories and their own unique styles which really make the characters stand out.

The Descendants are fabulous toys and a big hit with the kiddos. I’d highly recommend you shop early if you’re deciding to give these as Christmas gifts.