Rocking around the Christmas tree, Let the Christmas Spirit ring! The holiday season can have us totally rockin’ out to the festive tune we have blaring on the radio! If you’re into music and board games, then the Dropmix Music Gaming System from Hasbro will rock your holidays.

Harmonix, an independent gaming studio and the maker of Rock Band and Guitar Hero joined forces with Hasbro, the maker of the best toys on Earth, to create a musical masterpiece. They fused together music, technology, and games. The result was Dropmix, an electronic mixing game, aka a music-themed board game, which will allow you to mash together today’s hottest songs to earn points. 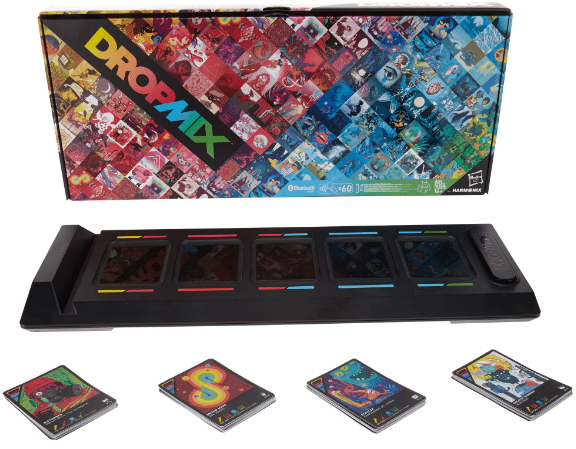 The Dropmix Gaming System comes with an electronic game board, 4 packages of 15 Dropmix NFC enabled cards, and an instruction sheet. To get the party started you’ll have to first add 4 AA batteries to the game board and download the Dropmix app on your electronic device. The app works on both Apple and Android products.

The NFC game cards come in a variety of musical genres; Indie, Pop, Dance, R&B, Hip Hop, Rock, Country, and Electronica, with Country music having the fewest cards. Each card offers a portion of a song. So you might get vocals from one song, the instruments from another, and the drums from another song. The DropMix cards let you mix songs from top artists, including Bruno Mars, Childish Gambino, Disturbed, Ed Sheeran, Imagine Dragons, Sam Hunt, Sia, The Weeknd, and more.

When you put these cards on the fives spaces on the Dropmix Gaming System, and the app will play the unique part of the song. So, you’ll be groovin’ to a new song. The idea is that you can build a new track using the bits and pieces of the hottest hits. You’re not limited by any means. You’d be surprised who well classical music blends with Hip Hop.

Now each of the five slots on the game board will have one or two colors associated with it. Each of the NFC game cards has points and also has a color on them and they must be played on the space with corresponding colors. Each color has a theme, like yellow is vocals, red cards are melody loops, blue cards are beats and rhythms and green cards are bass and harmonies. Plus, there are special wild cards and white FX cards that can be played anywhere.

The game offers three different modes, Freestyle, Clash, and Party. With Freestyle, you simply place the cards on the game board and create some cool beats. Party allows up to five players to cooperatively create some tunes. In Clash, the heat is on and players play head to head. It’s a much slower pace so players get to appreciate the mixes created.

Dropmix is the wave of future games. It’s fun, it’s current and it allows creativity. It’s a game that will have the whole family dropping beats and mashing today’s popular hits. Recommended for ages 16+ and retails for $99.99.