Like many, Autumn is my very favorite time of year. Oh, the colors, the colors, the colors. I love cascades of leaves turning vivid shades of crimson, magenta, gold, yellow, bronze, orange and brown. It’s also my favorite time of year to travel. Late September and into October is not only cooler to travel, it’s cheaper — you can get some really great deals on room and souvenirs — and it’s also not as busy. There are far fewer tourists and tour buses, so you have a lot more elbow room. Trekking through Europe in autumn exposes you to the loveliest scenery you can conceivably imagine with breathtaking colors above and underfoot.

Scotland is the U.K’s northernmost country. It’s a land interspersed with Cairngorms, glens, lochs, castles, diverse and dramatic landscapes, and maybe the odd water Kelpie or Selkie — everything you need for a good fairy tale. Scotland has a population of about 5½ million people and several large cities. Glasgow is the largest with Edinburgh being the second largest. Each of these thriving cities has their own culture, personality and historic sites to see.

Edinburgh is Spectacular in Autumn

Edinburgh, Scotland’s capital, has a medieval charm that makes you feel like you’ve stepped back in time. Its Old Town and elegant Georgian New Town with romantic botanical gardens and neoclassical buildings welcome visitors all year round, but autumn has a special cozy ambience. This ancient town has more to offer tourists than bagpipes, tartans, Scotch whiskey, and a few rowdy pubs. After London, Edinburgh’s historical and cultural attractions have made it the second most popular tourist destination. 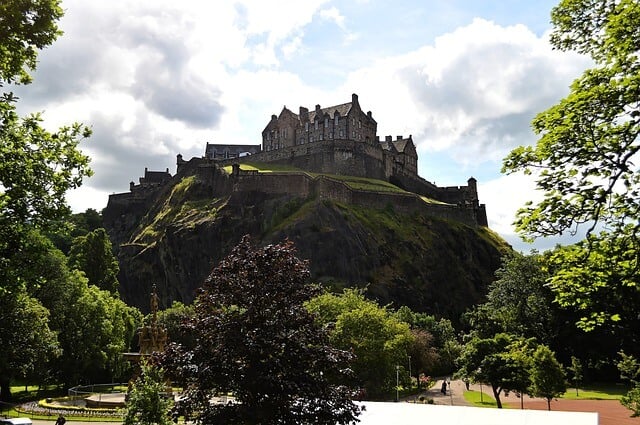 The historic 12th century Edinburgh Castle dominates the skyline and sits impressively on a 700 million-year-old extinct volcano called Castle Rock. It has housed many Scottish monarchs including Queen Margaret and the beloved Mary Queen of Scots. Over the centuries it’s had many restorations and fell under numerous sieges. In 2014 Edinburgh Castles was identified as having endured 26 sieges in its 1100-year-old history, giving it a claim to have been “the most besieged place in Great Britain and one of the most attacked in the world”. 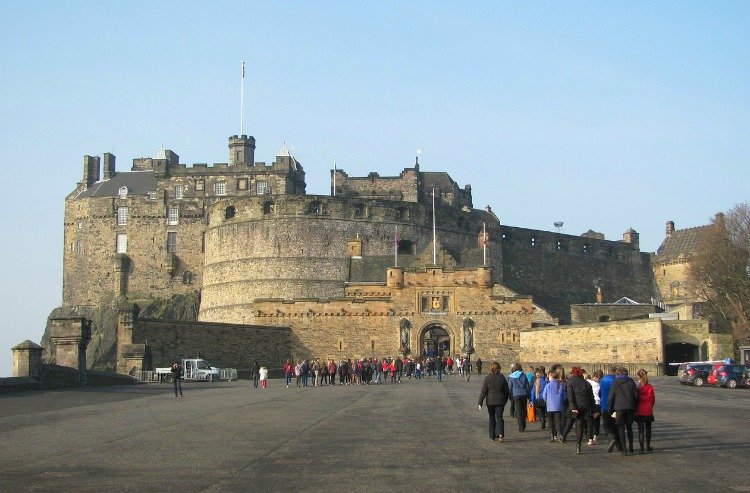 Today, it’s home to Scotland’s crown jewels and the Stone of Destiny, which used in the coronation of Scottish rulers. With its rich history and beautiful scenery, it’s a must-see when in Edinburgh. The castle opens daily at 9.30 am, closing either at 4 pm or 5 pm depending on the time of year. Tickets cost £17 for adults and £10.20 for children under the age of 16. Allow yourself a good 2 hours to take in the castle highlights. 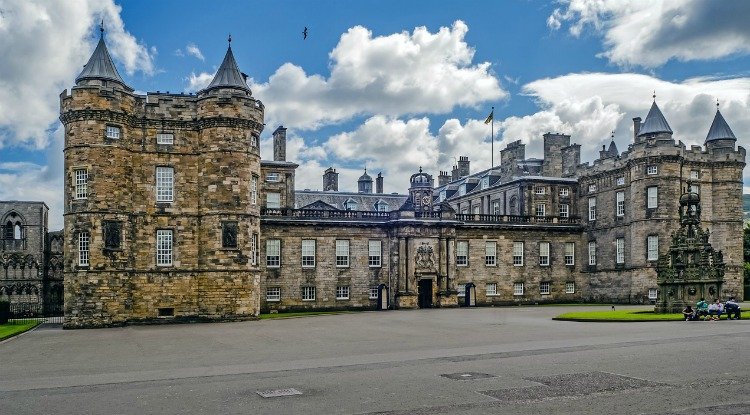 The Palace of Holyroodhouse is often referred to as Holyrood Palace and is the official residence of Queen Elizabeth II. Holyrood Palace has served as the main home of royalty since the 16th century. With its beautiful grounds, it’s the ideal location for state occasions and official entertaining.

Queen Elizabeth spends one week at the beginning of each summer in residence at Holyrood Palace. During her time there, the queen carries out a range of official duties, commitments, and ceremonies. The historic 16th-century apartments of Mary, Queen of Scots are open to the public year-round. The only exception would be when the Royal Family is there or there is a state function.

This palace is also said to be Edinburgh’s most haunted building. Scotland has had several bloodthirsty battles so it’s no surprise that angry spirits are wandering the grounds. The palace was the scene of a horrific murder in 1566 when Italian courtier David Rizzio was stabbed to death. Rizzio was not only the private secretary to Mary, Queen of Scots, but he was also her dear friend and confidant. Mary’s second husband, Lord Darnley, was volatile and had become extremely jealous of his wife’s friendship with the Italian, so on March 9th, 1566 Rizzio was seized. Mary pleaded for Rizzio’s life but sadly he was stabbed mercilessly 56 times by Darnley and a group of noblemen. His body was then thrown down the main staircase — but all is not forgotten. To this day, an ingrained bloodstain remains on the spot where Rizzo died.

Ironically, Darnley himself died under suspicious circumstances the following year. His ghost has been seen wandering the grounds of Holyrood whereas the ghost of Mary, Queen of Scots roams the palace. Oh, but there are more ghosts!

Perhaps you’d love to run into the spirits of past nobles or condemned witches burnt at the stake. Well, you’ll have the opportunity on Edinburgh’s Ghost Tours. Get your spook on during a 75-minute tour where you visit the Old Town’s lanes, explore dungeons, and underground vaults where spirits are said to lurk. The tour guide will reveal gory details about crimes, murders, hauntings, and paranormal events. Don’t go alone!

Holyrood Abbey was founded in 1128 by King David I. During the 15th century, the abbey guesthouse was developed into a royal residence, and after the Scottish Reformation, the Palace of Holyroodhouse was expanded further. The abbey church was used as a parish church until the 17th century and sadly has been a ruin since the 18th century. The remaining walls of the abbey lie adjacent to the palace and are now protected as a scheduled monument.

The Royal Mile is at the center of Edinburgh’s Old Town and as its name suggests, it’s one mile long. The Royal Mile is actually made up of four connecting streets: at the top (west) is Castlehill, then Lawnmarket, High Street and Canongate. With Edinburgh Castle at its head and the Palace of Holyroodhouse at its foot. The Royal Mile is home to many historic buildings; Gladstone’s Land, The Real Mary King’s Close, the Writer’s Museum, John Knox House, and the Museum of Edinburgh to name but a few.

It is also home to St Giles’ Cathedral, established in the 1120s during the reign of King David. As the epicenter for tourists in Edinburgh, the Royal Mile has also seen prestigious new additions in recent history, most notably the Scottish Parliament. 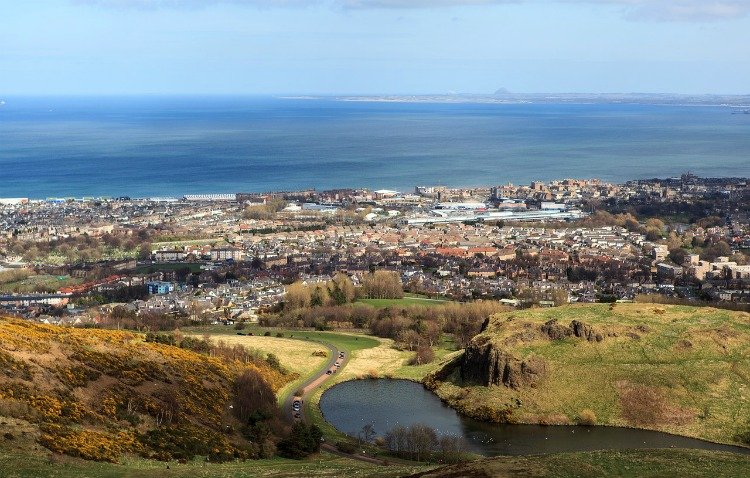 Set within Holyrood Park, and a short walk from Edinburgh’s Royal Mile in the heart of Edinburgh, Arthur’s Seat is an extinct volcano, which sits 251m above sea level and offers excellent views of the city. Holyrood Park is also home to several sightseeing musts —Duddingston Loch, as a freshwater reserve for birdlife, St Anthony’s Chapel – a 15th-century medieval chapel and Salisbury Crags – a series of 150-foot cliff faces commanding one mile of Edinburgh’s skyline.

The Scott Monument was built to honor Scottish author Sir Walter Scott. It’s located in Princes Street Gardens opposite the Jenners department store on Princes Street and near to Edinburgh Waverley Railway Station, which coincidentally is named after Scott’s Waverley novels. Sir Walter Scott wrote what are now deemed classic novels: Ivanhoe, Waverley, Rob Roy, Lady of the Lake, The Black Dwarf, The Lord of the Isles, Castle Dangerous, and many more.

The Dugald Stewart Monument is a memorial to the Scottish philosopher Dugald Stewart which was completed in August 1831. It’s situated on ever-popular Calton Hill which offers a spectacular view overlooking Edinburgh’s city center. Calton Hill is now marked as a UNESCO World Heritage Site and offers some of the city’s best views and if you get up early — the best sunrises.

There are those who call themselves ‘tombstone tourists’ because they love visiting the illustrious dead in very old graveyards. They want to see the final resting place of the fascinating, romantic, or tragic souls who passed away centuries ago. Edinburgh’s five historic graveyards draw in a lot of eager headstone gawkers but wear and tear are affecting its appearance. Decay, erosion, vandalism, and overgrown paths are discouraging visitors to step inside the grounds that once evoked significant memories. I’m going to add civil neglect in here as well. I was really surprised that the graveyards are left to nature and its elements, and very little is being done to care for them. What a shame. Although, the city has developed a new project for the Calton New Burial Ground where local volunteers are improving the grounds.

Buried among the collection of monuments, memorials and markers are notable past residents who formed the very fabric of Edinburgh society. If you visit one of their graveyards, be respectful and gracious.

Fresh, seasonal produce awaits visitors at the various Edinburgh Farmers’ Markets. Their markets are open all year round from 10 am-2 pm each Saturday in the shadow of the castle ramparts in Castle Terrace. These markets are bustling with delicious smells and flavors that will tickle your tastebuds as merchants tempt you with their tasty wares. Organic seasonal fruit and vegetables are on the menu, as well as juicy jams, chutneys, chilies, and cheese. The aroma of freshly made crusty bread, handmade chocolates, and organic beer will have you taking home several varieties.

For vegans like me, you’ll want to check out the Leith market. On the first Saturday of the month, it’s home to a Vegan Quarter where, alongside their regular line-up of traders and merchants, the Market is filled with a delicious variety of Vegan treats from cupcakes to Vegan Meat. 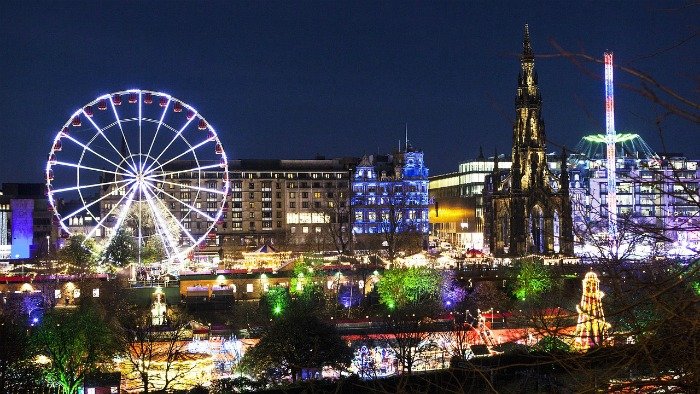 If you happen to visit Edinburgh during the holiday season, don’t forget to take in the Edinburgh’s Christmas Market. Well actually, you can’t miss it — it’s the six-week highlight event of the year. It’s visited by thousands of excited Christmas shoppers that look forward to reveling in the delicious aromas sweet-scented Gluhwein, crepes, waffles, and spiced apple cider. They also feature an array of crafters and artists; beautiful glass Christmas baubles, handcrafted wooden decorations, and inspirational gifts will definitely put you in the holiday spirit.