You may or may not live in a community where fluoride is added to your tap water. Fluoride was added to water in an effort to prevent tooth decay and demineralization. Although many dentists and various health authorities continue to promote the continued use of fluoride, there are communities that have chosen to end their fluoridation programs. Since 2008, fluoride use in Canada has dropped by 25%. So why would some communities remove fluoride from their water? Here’s why. 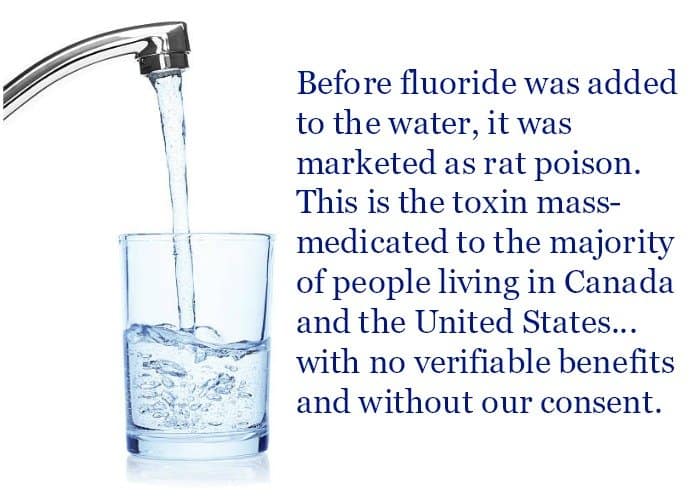 The main fluoride chemical that is added to our water supply is Fluorosilicic – a corrosive acid – toxic industrial waste by-products captured in the air pollution control devices of the phosphate fertilizer industry. These same pollutants if released into the air, cause significant environmental harm. So how is it, that these same pollutants are deemed safe when diluted down and added to our tap water? Who’s insanely dumb idea was this?

Most Developed Countries Do Not Fluoridate Their Water

In the US, top health authorities claim fluoridating water was a huge 20th-century accomplishment, but very few other countries concur. More people in the US alone drink fluoridated water than the rest of the world combined. Why would this be? Almost all advanced nations would not even consider adding fluoridate their water. Here are some stats:

Western Europe — 97% of western European countries have zero fluorides in their drinking water.
China — has banned fluoride – 30 million people suffer crippling skeletal fluorosis
India — no fluoride is used
Japan — Less than 1% practice water fluoridation
Czech Republic — started a fluoridation program in 1958, but stopped in Prague in 1988 and the rest of Czech stopped in 2008

No Difference in Tooth Decay

Fluoride affects other healthy tissue in the body besides the teeth. Advocates of fluoridation affirm that the safety of its use is beyond scientific debate. Toxicologist, Dr. John Duoll published a comprehensive review of fluoride toxicity. A report from Fluoridealert.org states: “fluoride is an endocrine disruptor and has the ability to affect the thyroid gland,  brain, bones, pineal gland, and blood sugar levels. Scientists who have been summoned to investigate if current fluoride exposures in the US are contributing to chronic health issues like dementia, thyroid disease, and diabetes are far from giving it the thumbs up.” Despite 60 years of fluoride use, many of the basic studies to determine its safety have yet to be conducted.

NOT a Natural Process

Advocates of fluoride chime in that Mother Nature thought of fluoridation first. What this means is that fluoridation can naturally occur at high levels in various water supplies. The level of fluoride that is found in the majority of fresh surface water is far lower than added in fluoridation programs. For those water sources that do have the same high levels of fluoride as tap water, studies have found that frogs and salmon suffer serious harm, including a shorter lifespan.

According to the Center for Disease Control, 40% of the teens in the US alone, have a condition called dental fluorosis. This is where fluoride interferes with tooth-forming cells causing serious tooth erosion. Most kinds of toothpaste on the market contain fluoride and it may be difficult to find brands that don’t. I found several brands online —Toms, Earth Paste, and Jack & Jill for kids. When fluoride is added to water, then it’s also added to commercially made foods and beverages made with that water. Other sources of fluoride include Teflon pans and some pharmaceuticals. So, the safety of fluoride is not limited to our drinking water, it encompasses all the other products made with this water.

I happen to live in a city that uses fluoride in our water supply. But, I use a reliable water filtration system that removes this chemical from the water throughout my whole house.