One of the hottest and most anticipated movies this summer is Guardians of the Galaxy. Marvel and Disney have set to release this epic superhero adventure on August 1, 2014. They have quite the cast of alien and human characters that range from somewhat normal, peculiar, diabolical, too cute. There are good universe saving superheroes and those who just love to be a menace and destroy.

Once kids and adults alike resonate with a character, they want the toy version, right? Well, Hasbro is right on top of this and now have all the Guardians of the Galaxy creatures personalities available on their site or at several big-box stores like Walmart and ToysRUs.

I got a few of the toys to play with and they’re really awesome! Rocket Raccoon is really adorable, but don’t be fooled. This genetically engineered raccoon was a bounty hunter and mercenary and is a master of weapons and battle tactics, and he has no compunction about using his skills. There are several Rocket Raccoon toys, I got the Big Blastin’ Rocket Raccoon Figure. 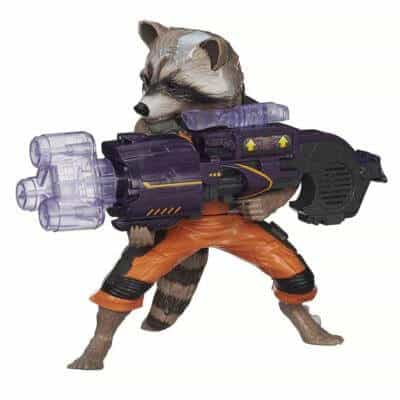 This toy is poised to shoot, he’s locked and loaded. Just press the button on his left thigh and Rocket Raccoon will speak his mind and blow you to pieces, or disintegrate you. He pretty much stays in his stance, but the blaster spins upon firing. He has about half a dozen phrases and the clear plastic parts of the gun will light up in different colors every time you press his button. The only assembling required is putting his tail on, it just snaps into place. The kids totally dig this rough and ready toy. 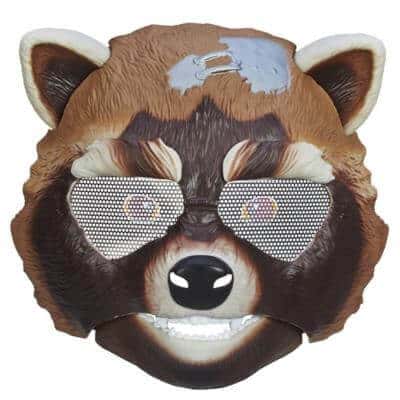 The Rocket Raccoon Action Mask is perfect for those action-packed days. It’s lightweight and has three straps at the back to keep the mask on securely. When you move his lower jaw, his ears and eyebrows will also move. You can see fairly well with the mask on, no hindrance or limitations. No one will mess with you when you’re donning this impressive face! 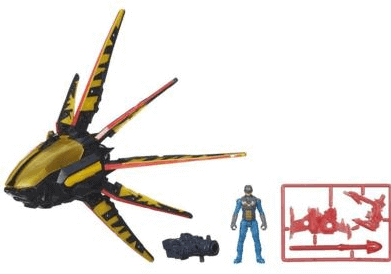 The Marvel Guardians of the Galaxy Nova Corps Starblaster Vehicle will be coveted by kids of all ages. This uber cool space cop’s vessel is able to fly in two modes, patrol and battle mode. The cockpit opens for the accompanying action figure, where he sits in there loosely. There is no seat to snap him into, so he gets jostled around. The little action figure does have moving arms and legs. It comes with three weapons that fit anywhere on the wing where there is a hole. Some wings have three holes, others have two, so you have a variety of tactical place to place your weapons. The wings expand and close easily and are ready to patrol the space hood. It’s so cool!!

With the movie ready to roll, these toys will be well sought after. They are sturdy, attractive, and the kiddo’s love them.

Disclaimer: I received products for review only. The humble views expressed here are my own, your may differ.