Trolls is one of the hottest and most adorable 3D computer-animated movies to hit the screen. It’s a musical adventure romantic comedy film that revolves mainly around two trolls. Princess Poppy is a relentlessly upbeat, if slightly naïve, Troll who inherits her crown on the very day her people face the first challenge that can’t be solved with a song or a hug. Branch, on the other hand, is a drably colored, grumpy survivalist Troll who is extremely cynical about their positive, happy, upbeat philosophy. Poppy convinces Branch to join her quest to save their village from destruction by the Bergen, creatures who eat trolls. Wow, what a story.

To celebrate this saa-weet movie, Hasbro has created toys and games fashioned after the Trolls characters. Check them out. 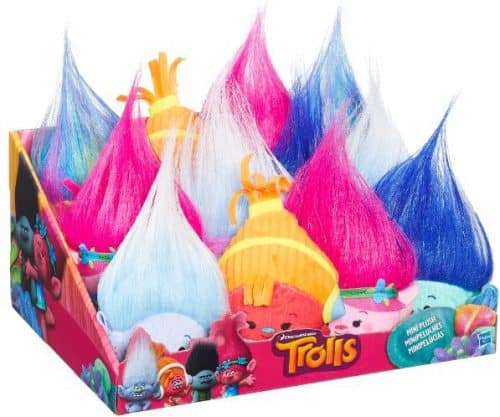 DreamWorks Trolls Mini Plush collection toys are beyond cute. These palm-sized Trolls are the adorable bean-bag filled plush versions of each of the main characters. They’re lightweight and feature their character’s signature hair color and clothing. (each sold separately). They retail for $4.99 and recommended for ages 4+. 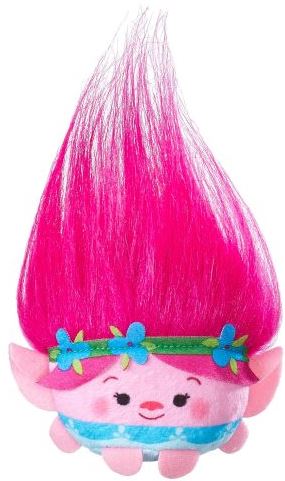 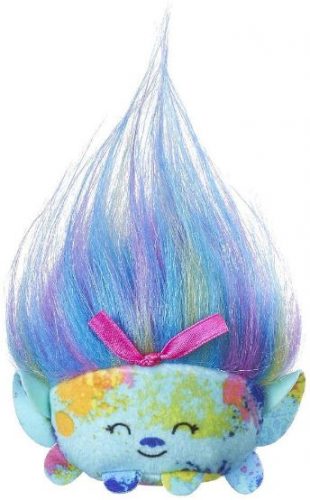 Poppy is the heroic leader of the pack, known for their wild and colorful hair. She’s even rocking a full head of funky pink hair to play with and style! Her soft body has a bean-bag filling so she can stand on display in a collection. Show off a cast of characters from the movie or carry around the perfect, portable, mini plush companion for Hug Time. 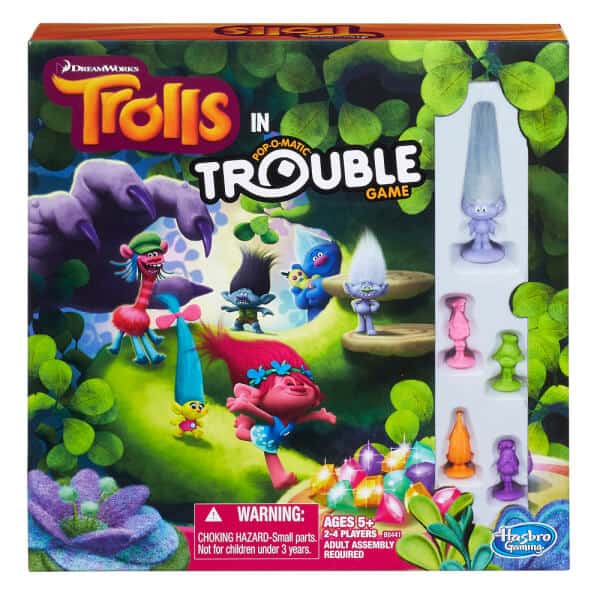 The game Trouble describes the Troll’s situation perfectly; they are in serious trouble with the Bergen. This game is similar to the original Trouble version, but with a few movie twists. The game includes a gameboard, Pop-O-Matic dice roller, 16 Troll pawns (four each of Poppy, Branch, DJ, Suki, and Fuzzbert), Guy Diamond Troll figure, 4 adhesive foam pads, and instructions. 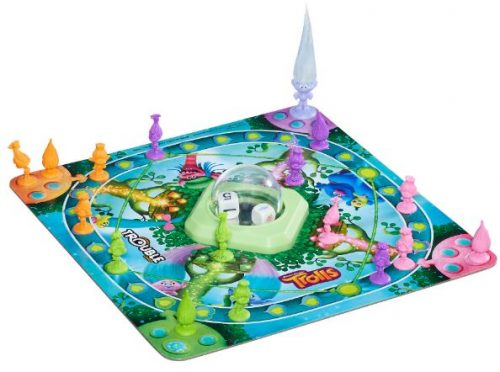 This version of Trouble has two die in the Pop-O-Matic, one with numbers and the other with unique characters. These characters include a Bergen Bite, Guy Diamond, and a Hud Time, each affects the game. Get your trolls to safety before the Bergen eat them. Some assembling is required. For ages 5+ and retails for $14.99. 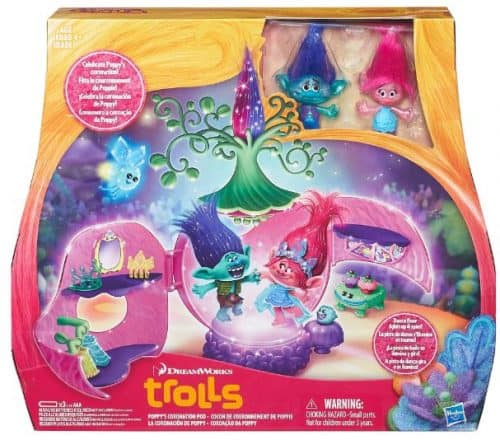 Poppy’s Coronation Pod represents everything Poppy loves, music, dancing, hugs, and lots of fun. This playset comes with 2 figures: Trolls Poppy and Branch, 2 removable dresses for Poppy, and all of the 11 accessories that are fit for a princess’ party, plus an instruction manual.

This fabulous playset features a magical dance floor that lights up and spins. Press the green troll face on the right of the pod, and the floor lights up. Turn this same button and the dance floor spins. What fun! Some assembling is required plus AAA alkaline batteries are needed. For ages 4+. Retails for $24.99. 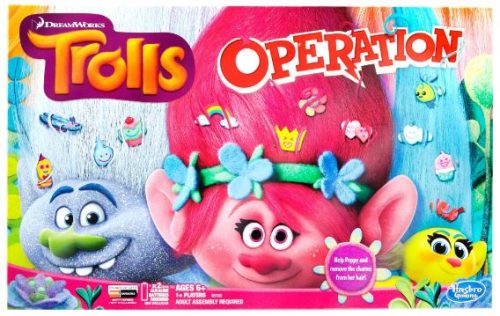 In the Operation Game: DreamWorks Trolls edition, Poppy and her friends have tiny charms stuck in their flowing hair and need help getting them out! Collect all 12 of the charms from the Troll’s colorful hair… but be careful! Touching the sides of the openings with the tweezers will set the buzzer off, and then it’s the next player’s turn. When all of the charms have been collected, the player with the most charms wins. Play with friends or solo. For ages 6+ and retails for $19.99. 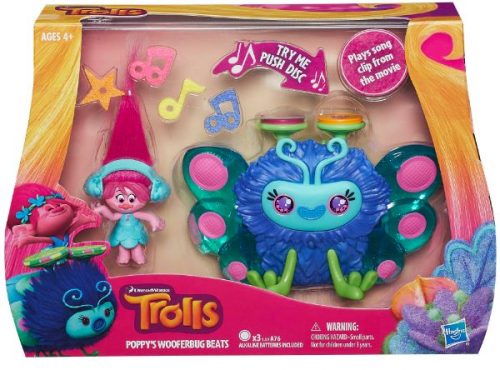 In music, it’s all about the beat, and the Wooferbug has got some funky upbeats. Poppy is one very cheerful Troll who loves to spread joy, positivity, and lots of hugs. She loves to sing, dance, and listen to some upbeat music and now you can too with your own Wooferbug. Press the orange button on top of the Wooferbug and he’ll play the song from the DreamWorks Trolls movie. In between the pink and orange discs you’ll see a small post where you can attach Poppy’s left foot. The kit includes 1 Poppy figure, 1 bug with sound, 4 Fuzzy Flair shapes, 1 set of headphones, and 3 alkaline batteries. Let’s start the party! For ages 4+ and retails for $19.99.

If you want to be immensely happy like Poppy, pick up the latest Trolls toys and games. Your family will love them.
Disclaimer: I received complimentary products to facilitate a review. All opinions express are my own, yours may differ.