Beer is a frothy beverage that is popular the world over, but, it’s steeped in German history. Germans have been brewing ales and beer for thousands of years, and people flock to their beer gardens and beer halls every year. The most famous beer hall is the historic Hofbräuhaus in Munich, Germany. After the world-famous Oktoberfest (where the Hofbräu has one of the largest beer tents), the Hofbräuhaus am Platzl is Munich’s most outstanding tourist attraction and historical monument. For Germans, Munich, beer and the infamous Hofbräuhaus are a symbol of the Bavarian culture, and I savored the experience.

Originally built in 1589 by Bavarian Duke Maximilian, the Hofbräuhaus translates to Royal Court Brewery. Centuries later it’s still in operation despite being bombed during WW II. Remodeling started in 1897 by Max Littmann, but it took till 1958 to be completely rebuilt. Today it’s recognized as one of Munich’s oldest breweries that serves locals and tourists year-round. Visiting and soaking in the ambience of the Hofbräuhaus is something you must experience when in Munich.

Did you know that it was only during the reign of Ludwig I, 1828, that the Hofbräuhaus was open to the public? Before then, you had to be royalty or someone of equal importance, like Wolfgang Amadeus Mozart, (who just happened to live around the block) to enter the establishment. Today regardless of your status, rank or name, you can mingle with the crowd and enjoy a large stein of lager and a meal. 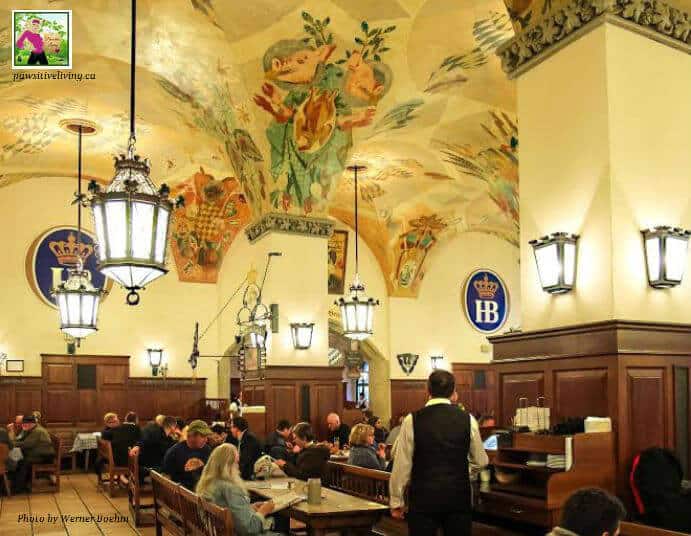 The Hofbräuhaus is a family-friendly place where you can bring the whole gang for a meal and some Bavarian entertainment. It’s a beer hall, restaurant, and entertainment center that’s large enough to seat up to 1300 guests. Entering the Hofbräuhaus, you’re greeted with long wooden tables filled with lots of people making lots of noise. We happened to visit the Hofbräuhaus during the Oktoberfest, and it was incredibly busy. We had to keep walking around to find an empty table or wait until someone left. 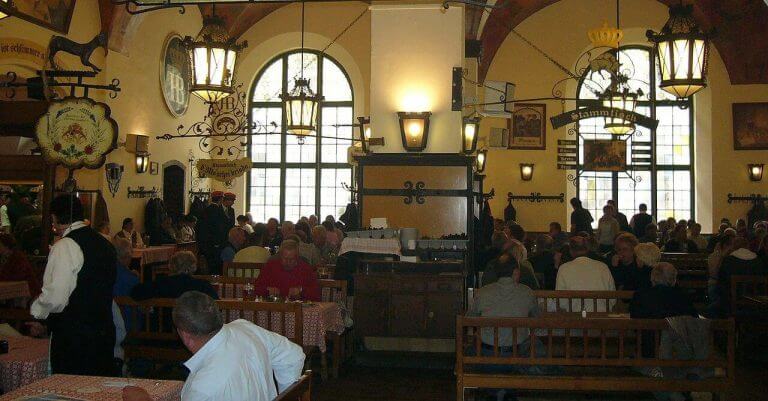 You’ll notice all the staff, and many of the patrons will be wearing traditional outfits that set the tone for the event. Waiters and waitresses alike are juggling up to 10 huge beers at once without a sweat and without any spills. Impressed? Yes! 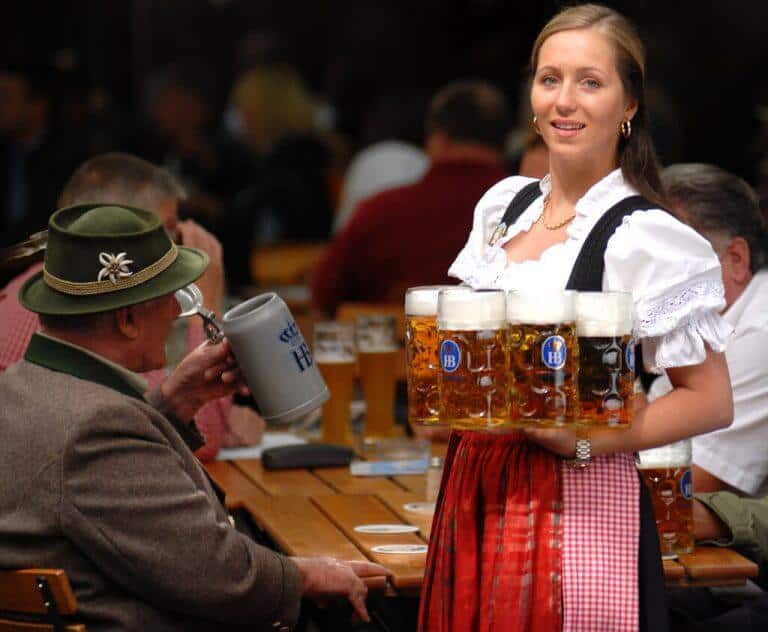 If you don’t eat meat like me, no worries, they even have a few vegetarian dishes that taste great with your favorite beer. Prost! 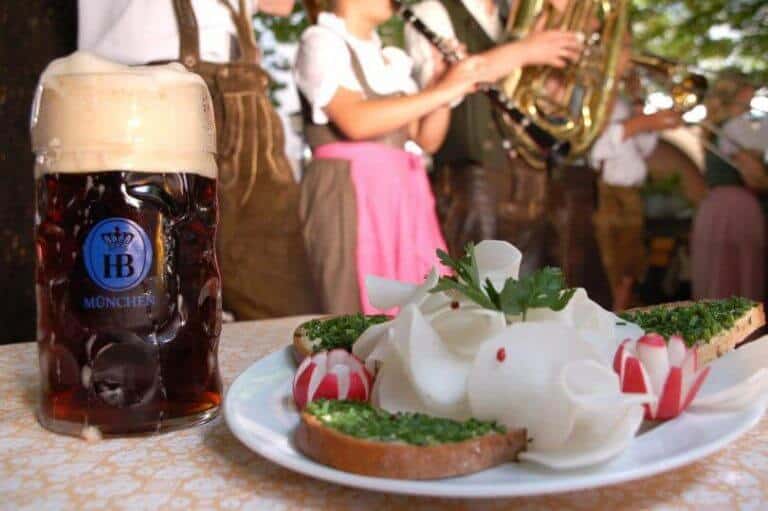 Of course, they have a selection of refreshing beers, like the Hofbräu Dark Beer, Hofbräu Original, Münchner Weisse, wines, nonalcoholic beer like Hofbräu Nonalcoholic Wheat Beer, plus juice and pop. 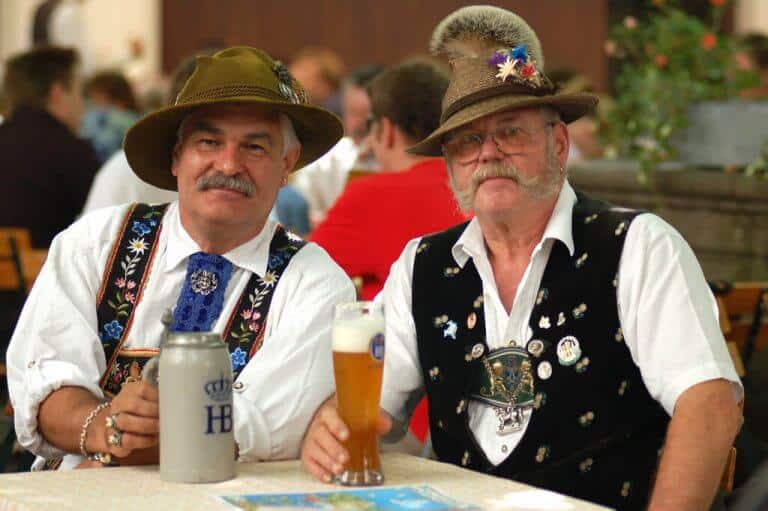 Below is a locker of the stored steins of loyal customers; yes you need a lock and key. There seems to be a vast amount of regular patrons. It looks like King Ludwig’s stein is still there! 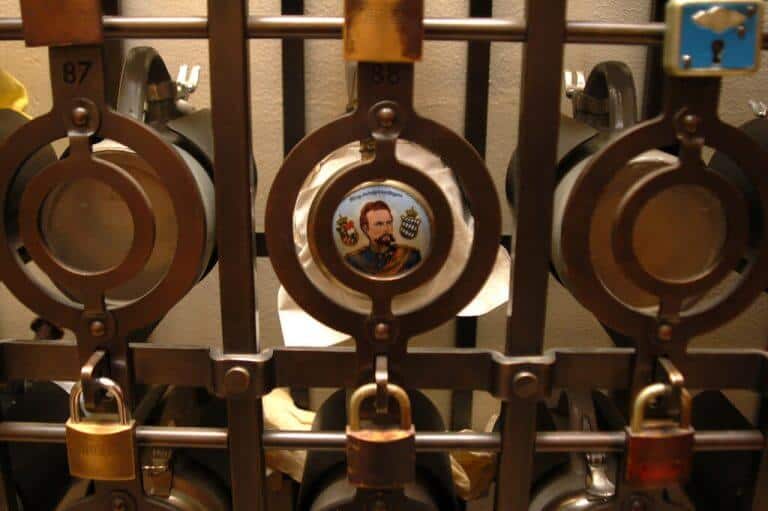 Good food and cold beer are further enjoyed while listening daily to the traditional Bavarian music, which includes an Oompah Brass band, singing, dancing, and lots of yodeling. You’ll also see classic dances like Bandltanz (The Maypole Dance), Holzhackertanz (The Wood Chopper’s Dance), Mader ( The Mating Dance), and the Miners dance. You can also get right into the festive mood by singing along with the crowd to one of their traditional songs. 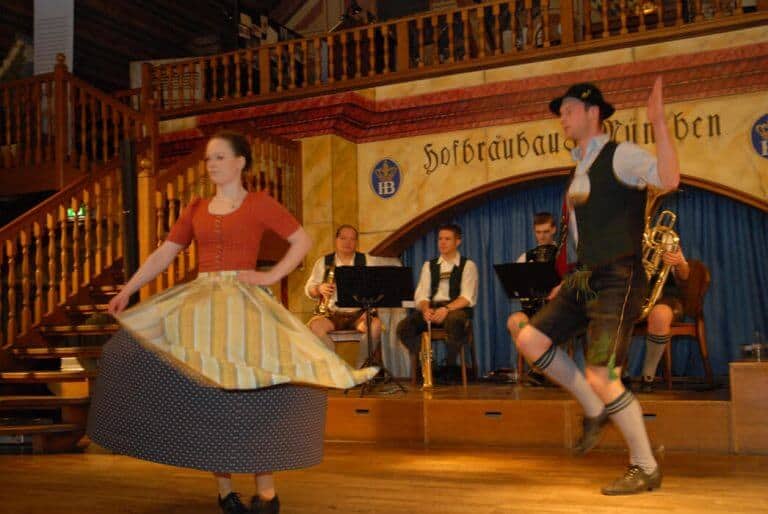 I must mention that the Hofbräuhaus can get very loud and rowdy in the evenings. If you have kids with you, then it’s best to take them there early in the afternoon or dine with them in the Viktualienmarkt. I’d also advise visiting the Hofbräuhaus before or after the Oktoberfest; otherwise, you are fighting very large crowds that are there for a very good time. 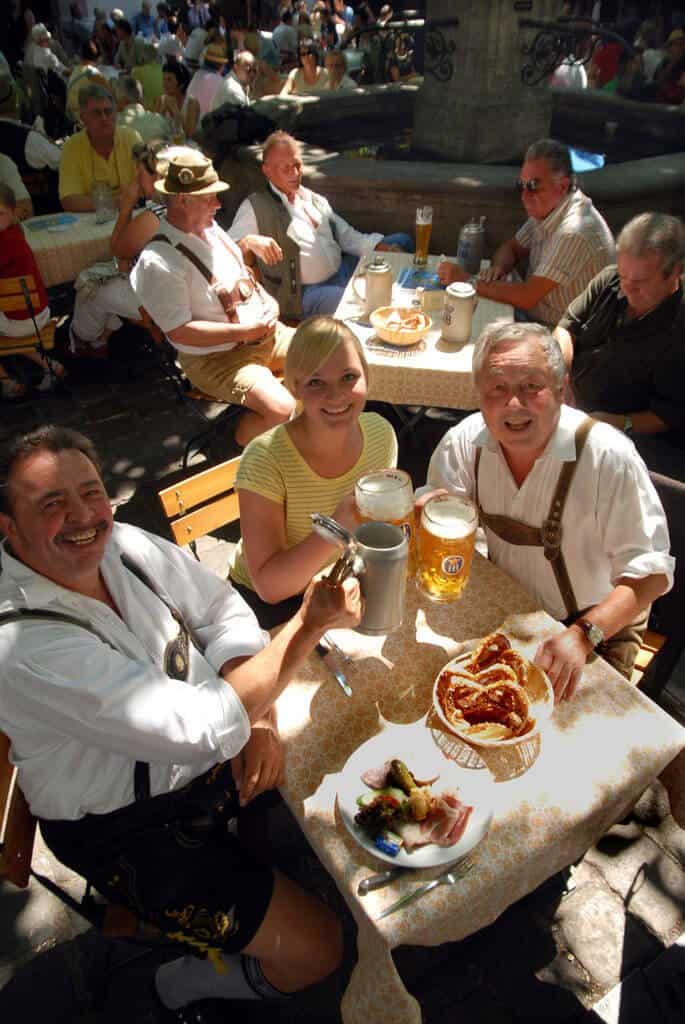 We loved been totally absorbed in the Bavarian culture at the Hofbräuhaus. It’s good fun, lots of laughs and you’ll make lots of new friends from all over the world. It’s an experience you’ll never forget. 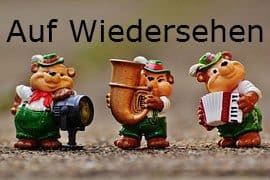 Disclaimer: Some of the photos were provided courtesy of Munich Tourism.