Germany has more than 20,000 enchanting castles gracing and dotting its immaculately splendid landscape. They range from small fortresses to grandiose royal palaces. Although there were many builders, none are more recognized than the eccentric King Ludwig II, Ludwig Otto Friedrich Wilhelm of the House of Wittelsbach. This Fairy Tail King is world renown for the stunning castles he built, the most famous being Neuschwanstein, Herrenchiemsee, and Linderhof. These stately homes have kept us spellbound for over a century. More visitors flock to Bavaria, Germany to experience these architectural splendors than any other country with castles, and I was one of them. 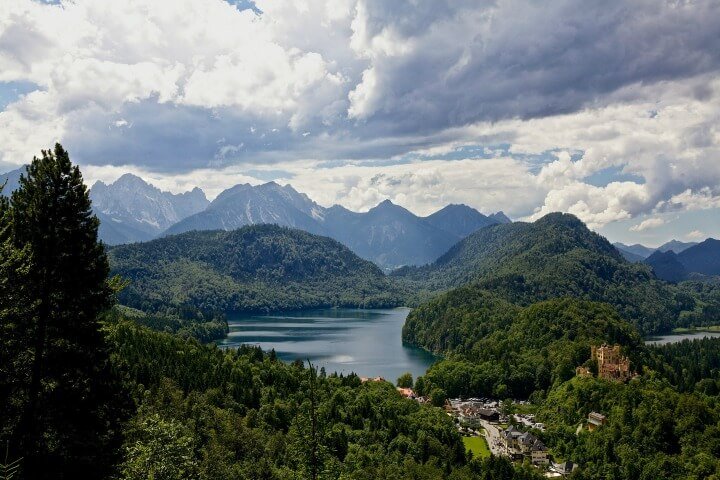 Ludwig’s story begins in the beautiful Hohenschwangau Castle (High Swan County Palace), where he spent his childhood. It’s here surrounded by glamorous stately rooms and breathtaking scenery that Ludwig got his creative inspiration to design and build some of the world’s most magical and romantic castles.

Just to give you a little background, the castle is located in a small quaint village of the same name. Hohenschwangau is a village in the municipality of Schwangau, Ostallgäu district, Bavaria, Germany. Hohenschwangau is about 1.5 km from the village of Schwangau and 4 km outside the town of Füssen, Germany. It is the next-to-last town on the Romantic Road tourist route that terminates in Füssen.

Hohenschwangau’s trade is mostly built on tourism with lots of souvenir shops, horse & buggy rides up to the castles, restaurants, hotels and Zimmer fries.

Most of the homes and businesses have Luftl (Luftmalerei) fresco paintings which are the characteristic decorations in the Alpine regions. These ornate paintings were a status symbol that represented the wealth of the merchant, tradesperson, farmer, or craftsmen. This started back in the 18th century colorful frescoes on the façade of their houses. The paintings often portrayed scenes from the Bible and famous fairy tales. 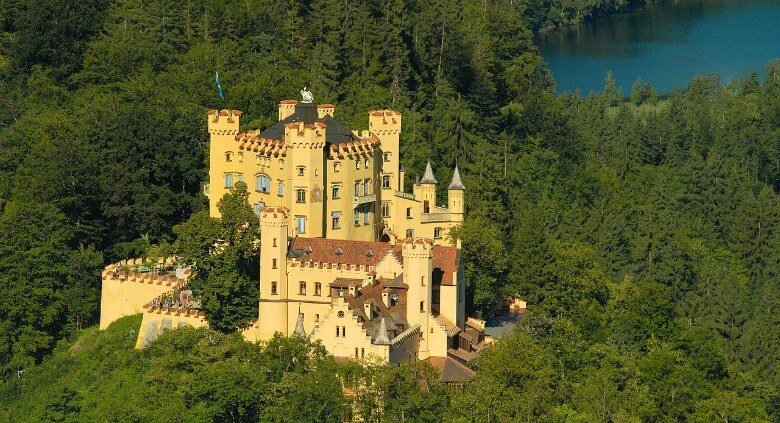 The Schwanstein Castle as it was known back in the 12th century, is where the Knights of Schwangau and other rulers resided over the ages. When the knights died out in the 16th century, the castle fell into ruins. In 1743 it was plundered by Austrian troops, and during the Napoleonic wars, it was damaged even more heavily.

In April 1829 Ludwig’s father, King Maximilian II of Bavaria was out on a nature walk and found this historic ruin. He immediately fell in love with the area and decided to purchase, rename, and restore the castle in neo-gothic style. Reconstruction of the entire castle began In February 1833, reconstruction of the entire castle started and continued until its completion in 1837. More additions added up until 1855.

Arguably some would say this castle is not as spectacular or romantic as its famous sister Neuschwanstein Castle, but I beg to differ. It’s still a fairytale castle and a major tourist attraction with its ornate towers, turrets, oriels, portals, balconies, pillars, and crenelated parapets. It’s in castles like Hohenschwangau where the ‘once upon a time’ stories begin. To get to the castle, you’ll have to walk up a steep road which will take you about 20 minutes, or you can hitch a horse carriage ride for a fee. These are your only two options as no private vehicles allowed in this area. 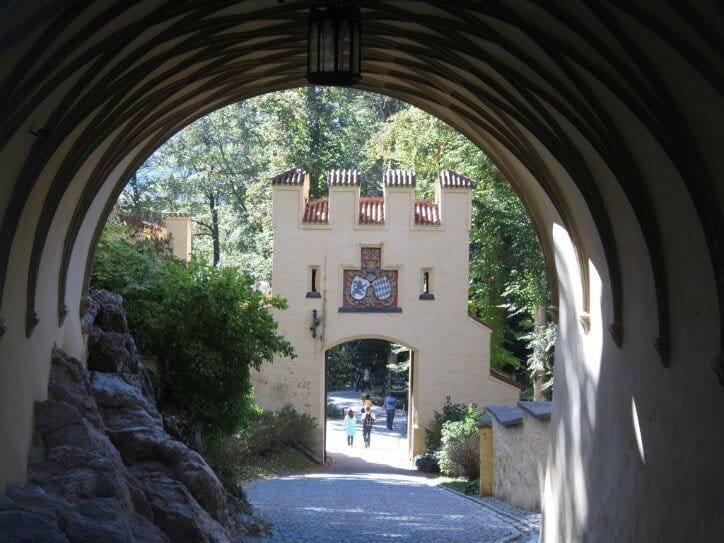 We preferred to walk up to the grand entrance and take in the whole experience; it was breathtaking. They offer tours in English and German from 9 am to 6 pm during the tourist months and shorter hours in the winter. Tour lines can be long, but it’s definitely worth the wait. The guided tour of Hohenschwangau takes about 35 minutes.

Sadly we were not allowed to take pictures of the inside of the castle. But as you could imagine, the decor and furnishings are of the highest quality and fit for a king. It was these fanciful rooms that no doubt provided the inspiration for young Ludwig.

After the tour, we then wandered in wonder around the beautiful grounds. The Hohenschwangau’s castle grounds are magnificently landscaped and groomed. Most of the surrounding area include steeply sloped hills, rugged mountains, and tranquil lakeshores are thick with lush trees and flowering shrubs.

The inner courtyard is serene and aesthetically pleasing. It’s a perfect place to relax, unwind, enjoy the spectacular view and absorb the medieval ambience. Several ornate sculpted fountains have been meticulously placed as focal points. Each one trickles water into a pond reservoir and is surrounded by ornamental plants. We really loved this area, it’s so peaceful and you can really capture the natural environment the castle is nestled in.

Both Hohenschwangau and Neuschwanstein castles have a splendid view of both beautiful lakes, Alpsee, and Swansea. The Alpsee lake, although only covering about one square kilometer, is still the largest natural lake in the Allgäu and forms the focus for all of the region’s water activities and sports. The lake is nestled in an idyllic location where wooded mountain slopes and the magnificent Hohenschwangau castle join forces create an unspoiled setting. You can rent a canoe or paddleboat and explore the 5 kilometers of shoreline and calm green waters of Alpsee.

Today, tourists can walk the paths of Germany’s royal predecessors. There are lots of biking and hiking trails offering various skill levels from casual to enthusiasts. The circular natural path that leads you to the shore, is now protected as a nature reserve. The path starts a Hohenschwangau castle, goes over the heart-stirring Schwarzenberg ridge, and down to picturesque Pinswang in the Lechtal. The views are breathtaking and it takes approximately 1 ½ – 2 hours to walk around, reflective on your gait, and how many times you stop to take photos. 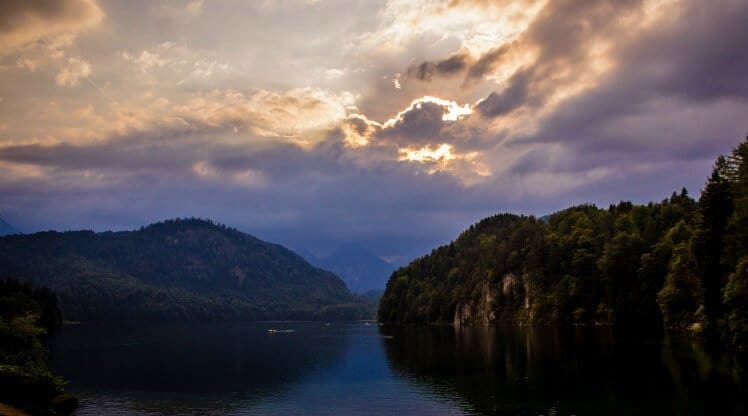 Only a short walk away from Castle Hohenschwangau is the sleepy little lake called Schwansee (Swan Lake). It’s set in the Allgäu mountains with the densely wooded Schwarzenberg and Kienberg forests forming an attractive backdrop. A charming path around two kilometers long leads round the completely unblemished shore. From here you can take in the impressive views of Hohenschwangau Castle, with Neuschwanstein forming a picturesque backdrop. I have walked this 2-kilometer path several times and each time it felt magical.

If you’re planning a trip to Germany, I would highly recommend visiting Bavaria and taking in a few castle tours. Hohenschwangau and Neuschwanstein are well worth seeing.

Disclaimer: I was granted permission by the Duke of Wittelsbach to share these photos. Copyright © Wittelsbacher Ausgleichsfonds Munich. 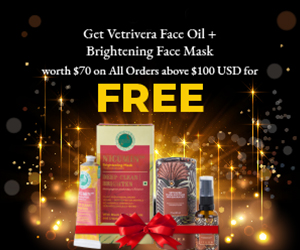 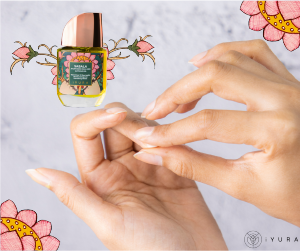 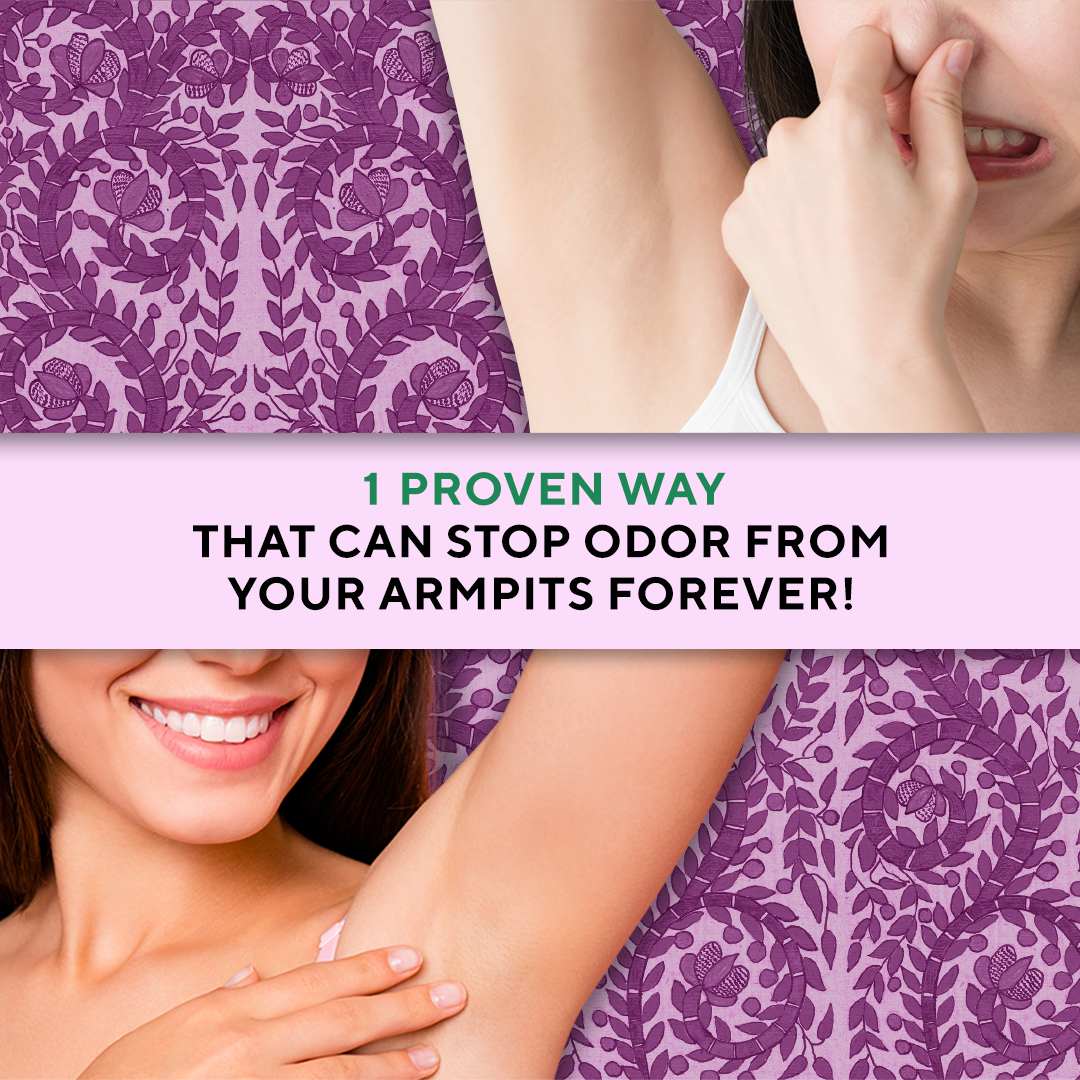