If we reflect back on our childhood, there was always one or more nursery rhymes that we never tired of hearing. The words or melody had a special flow that was endearing. I had a big book of Mother Goose poesies that I cherished and those very nursery rhymes are still very popular today. Lullaby’s and nursery rhymes are tender songs and poems that can go back several centuries and originate from various countries. Pat-a-cake, pat-a-cake, baker’s man” is one of the oldest surviving English nursery rhymes dating back to 1698. The European fairytale Little Red Riding Hood can be traced back to the 10th century.

It’s also said that nursery rhymes have hidden meanings and are supposedly linked back to historical people and events. And that lullabies and children’s songs were an odd form of coded historical narrative. For instance, the poem Mary Had a Little Lamb, was written by Sarah Hale and inspired by Mary Sawyer taking her pet lamb to school with her. But, as a rule, there is no evidence that there is any real historical proof that nursery fables were fashioned after any real person or event. Whatever the motive was for writing these lovable rhymes, we continue to enjoy and recite them over and over.

With our schools and neighborhoods being so culturally diverse, it’s good for children to learn about other nationalities and some of their customs, traditions, and even their nursery rhymes. We may tend to think of Germany and England as the origin of most nursery rhymes, but they do hail from other countries. Asian inspired rhymes are equally delightful and I found several that emerged from China and Korea. 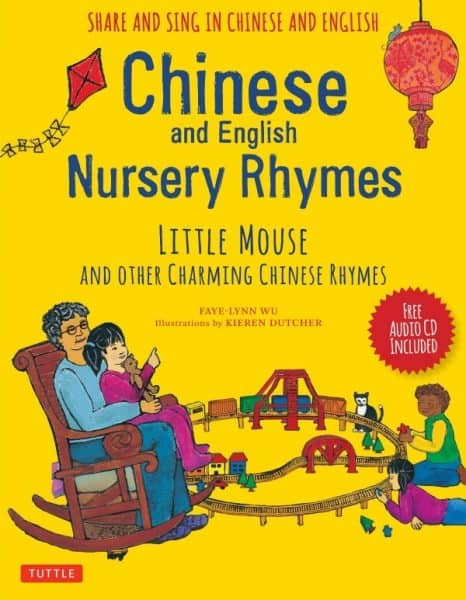 The Chinese and English Nursery Rhymes is filled with a collection of universal rhymes along with a sing-along Audio Disc in both Chinese & English languages at the back of the book. There are forty cheerfully illustrated verses written in both Mandarin Chinese and English in a side-by-side format that encourages kids to learn a new language. Kids love to learn and pick up on new words and skills very quickly. They were mesmerized by the Chinese language and the beautiful traditional logograms.

Throughout the book are ‘Did You Know’ notes that share insight and information about the Chinese culture. Did you know they have plants that represent each of the four seasons? They also show the flowers so children can learn to recognize them. Some of the verses included are Hickory Dickory Dock, Muffin Man, Twinkle Twinkle Little Star and many, many more. The audio CD is so charming. The songs are uplifting and so much fun to sing along with and to dance to. 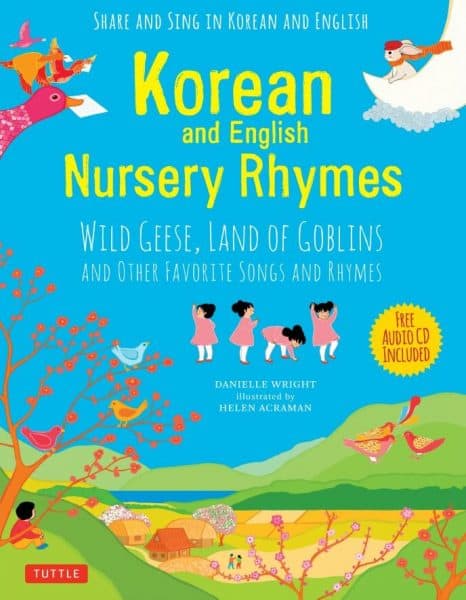 This lovely children’s book features traditional Korean songs and rhymes. It follows a similar format as the previous book, but both English and Korean languages are shown on each verse together. Kids can view words translated from English to Korean and the traditional logograms.

Some of the verses have additional information about the verse itself or how kids can make it interactive. Did you know that in Asian cultures the man isn’t a man at all, but a rabbit! The illustrations are cheerful, colorful, and inviting. Some of the included verses are Butterfly, Monkey’s Bottom, Little Fox, and Cotton Candy. There is also a CD included at the back of the book that will get the kids singing along with the playful melodies.