Monopoly has come a long way over the years. The original version was created in 1903, and it has since morphed into umpteen versions. My family and I love Monopoly and play it as often as we can. We also enjoy playing new varieties, and we recently got the Minion Monopoly version. That’s right, Monopoly has been Minionized! Minions are impulsive little creatures and run rampant, including their way to Hasbro! 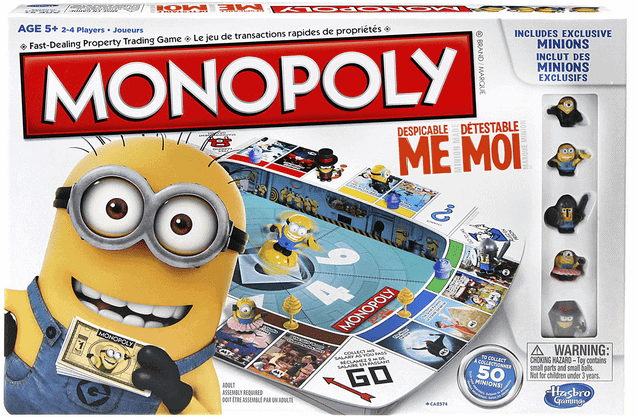 Minions are mischievous, and they continue their antics in this version of monopoly. The Minion Monopoly game comes with a cool arena like board and five minion characters that are used as tokens. There’s a magician, Nom Nom Tom, a Ninja, a ballerina, and a knight. These little minions are exclusive to the board game, and you can collect all fifty of them. On the edges of the bottom half of the game box, you’ll see all the different minions you can collect. The game also comes with property and chance cards, but minion versions. 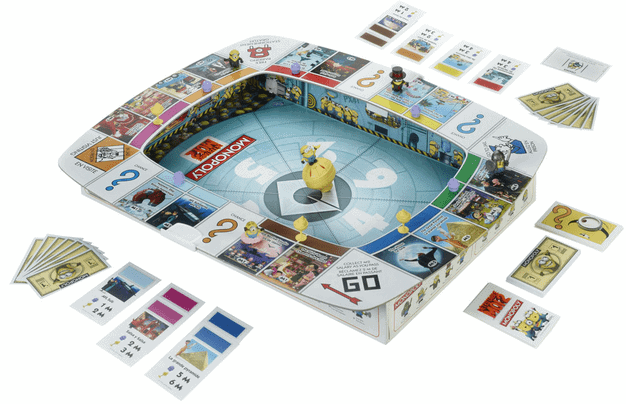 This version of Monopoly is more simplified than other versions, but equally as fun. You don’t have dice to throw. Instead, you attach Nom Nom Tom to the yellow top provided and spin him in the middle of the board and where he lands, is the number of spaces you move. When you pass GO, you collect two banana bucks.

The idea is to collect lots of Despicable Me properties and as many banana bucks as you can. Instead of places houses and hotels, you place either yellow ice cream sundaes or purple cupcakes on your property. You will have to assemble the board game, but other than that, you’re ready to play Minion monopoly. It’s a lot of fun, the minions are adorable, and it’s recommended for ages 5+. Available at most retails stores or on Amazon. Retails for approximately $45. Happy Holidays!