Despite all the high-tech digital games available, board games are still popular and trendy as ever. We love the excitement, entertainment and clever plotting involved in playing board games. They are a fun family and social activity that has many health benefits. They help with cognitive function, social skills, motor skills, reasoning, problem-solving, improved memory, lowers blood pressure and so much more. There are lots of board games on the market, but none are as influential as Monopoly!

Regardless of the version being played, Monopoly requires a cunning strategy and a healthy dose of friendly competition. The newest version to hit the market is Monopoly Fortnite. It was inspired by the ever so popular online video game Fortnite, and Hasbro has amped it up to include elements and locations from this epic game. However, it’s not about how much property or money you accumulate during the game, it’s about who can survive it.

Battle Opponents and Avoid the Storm 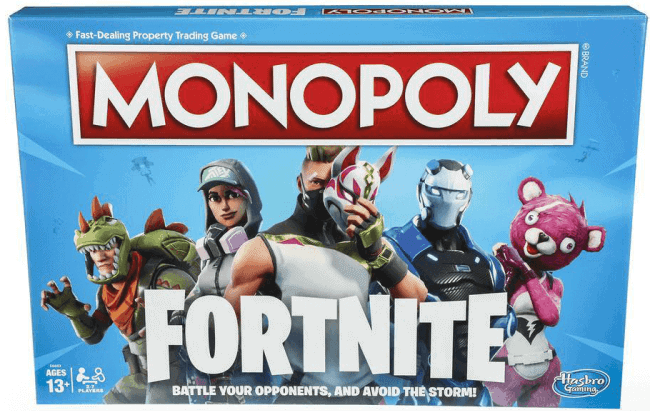 Monopoly Fortnite comes with a game board, 27 cardboard characters with stands, 16 location cards, 15 Storm cards, 16 loot chest cards, 8 Wall cards, 1 numbered die, 1 action die with labels, 110 Health Point chips, and game guide. The action dice comes blank so you’ll need to add the included stickers to each side. There are a lot of new features so players should read the instructions first and set the board up accordingly. Then choose a character or outfit card, roll the dice and move as directed.

Although Fortnite is set up like a regular monopoly game, the rules are significantly different. Instead of money, you’ll collect and play with HP’s or health points and each player starts off with 15 of them. To begin, these health points are placed in the center of the game board and you cannot exceed more than 15 throughout the game. Storm cards have replaced the classic Chance cards and you’ll draw one every time you pass go. Then you’ll collect the number of health points indicated on the Storm card providing you have not reached the 15 HP limit. 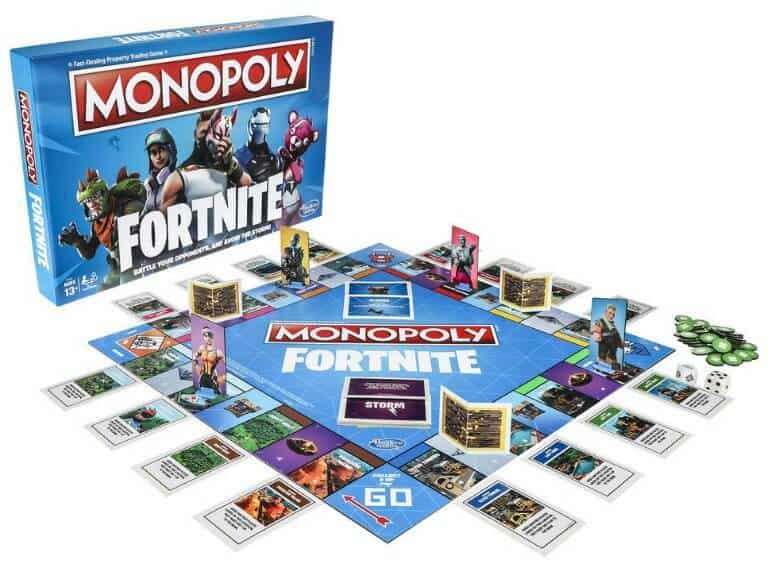 Roll both dice, and move the spaces shown on the number dice, while carrying out the requirements from the action die. There are four actions – 2 Bandages, 2 Crosshairs, 1 Boogie Bomb and 1 Brick. Bandages allow you to collect two HP’s as long as you haven’t maxed out. The Crosshairs roll allows you to choose one player on your side of the board to pay the bank one HP. Roll the Boogie Bomb and all players lose 1 HP and all the walls come down. The Brick roll allows you to make forward, complete the action or build a wall. Incidentally, walls act as roadblocks so it will end your turn if you run into one. But can be removed once the action of the space has been fulfilled.

You’ll need to play this game several times to get into the flow of the rules. It’s fun, it’s different and it’s definitely challenging! You can have anywhere from 2 – 7 players and the last one standing wins the game. We’re happy to have it as part of our Hasbro game collection!

Disclosure: Disclaimer: I received product to facilitate a review. All opinions express are my own, yours may differ.