Hasbro and Monopoly have the joined the Rebellion to bring you the Star Wars Monopoly game. If you’re a Monopoly or Star Wars fan, or both, then you’ll love using the force to maneuver the new Monopoly Star Wars boardgame. Here you’ll be able to buy, sell and trade iconic locations from the Star Wars film, including Hoth, Tatooine, and Kashyyyk. 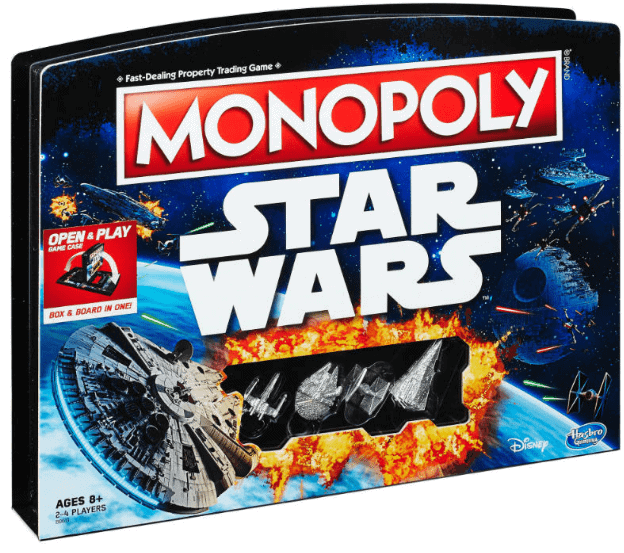 The galactic box opens up into the board game itself, which is ideal for clean up and storage. The board and pieces reflect all that is Star Wars, so you can expect a few subtle changes. To begin each cosmic game,  players will choose a game piece from the four different ship tokens; the Millenium Falcon, Tie fighter, X-wing, and Star Destroyer to move around the board. We found these pieces quite fragile; the Tie fighter broke on the first use. 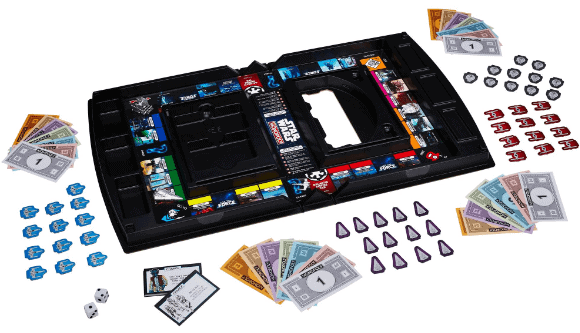 One twist is the four ‘use the force’ spaces. Landing on this space will grant the player a special power. They must roll one die and follow the instructions. There aren’t any house or hotels, but property markers that keep track of which players own which location. There are 22 locations to purchase including Echo Base, Ewok Village, and the Jedi Temple just to name a few well-known places.

This edition of Monopoly is a game Yoda and the Wookies would be proud to play. It’s well designed with galactic graphics and alien pieces that will appeal to all Star Wars fans and collectors alike. It’s a fun game that you just don’t want to stop playing. Recommended for 2 – 4 players, ages 8+. Retails for $24.99.