Remember all those summers when your kids and their friends goofed off, ran through the sprinklers, and played friendly (mostly painless) Nerf battles? Nerf darts soared through the air hoping to impact their target, but most of the time they missed and you never saw the dart again. Summer just is not the same without an abundance of Nerf toys, gadgets, and gear. This summer Hasbro has upped their game with the release of some super cool laser blasters, the Nerf Laser Ops Pro Deltaburst Blaster and the Nerf Laser Ops Pro Alphapoint Blasters. Now kids can ditch the darts and face off in some serious head-to-head live-action laser battles.

These laser blasters are a serious upgrade from their forerunners which allowed players to cheat. Kids will be kids and given the opportunity, of course, they’re going to cheat. These new versions have the hit detector IR receiver housed under a clear red plastic dome at the end of the blaster making it a lot tougher to cheat. If you cover this area with your hands to prevent being hit, you will not be able to fire your blaster. Busted!!

At first glance, the bold colored packaging of the Nerf Laser OPS Deltaburst has appealing action-packed graphics that will capture everyone’s attention. It kid on the box is ready for battle with his Nerf blaster and the armband which will give him an edge on his game. 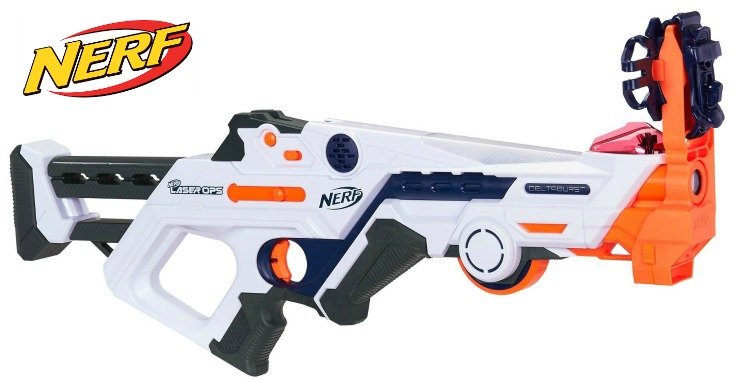 The Nerf Laser OPS Deltaburst come preassembled, all you have to do is add 6 AA batteries. This hefty blaster comes with an armband and an instruction sheet. There are two ways to use this blaster. You can either choose to be on teams, red or blue or go solo in the purple Free For All mode. So if you’re on the red team, you can only target the blue team. You won’t be able to blast anyone with the same team colors. But if you opt for the purple, you can blast everyone.

To get to the mode you want, turn on the blaster and press the reload button until you reach your color of choice and pull the trigger to set it. Now you’re ready to battle. I also need to mention that there is a switch for indoor or outdoor play. The outdoor option has a greater range of fire.

When you turn your blaster on, a display light will indicate two things, your Ammo capacity, and Health Points. Each time you press the trigger you release a laser and your ammo will get depleted. If you get hit, your health points will decrease. There is a speaker on one side that emits the sound effects, which makes it exciting and encourages more battles.

Now if you want to up your game, you can download and open the Nerf Laser Ops app onto your Smartphone — your Bluetooth must be enabled for this app to work. This cool option will allow you to sync all blasters to one phone. Plus players can access real-time battle intel which allows them to customize their blaster, track live stats, earn power points, earn upgrades, earn temporary power-ups, and locate opponents during battle.

If you’re playing alone, then the solo attachment will give you that live-action feeling. You attach your smartphone to the solo attachment and you are basically playing a video game, but with a blaster as the controller. NERF LASER OPS app works with select iPhone, iPad, iPod touch, and Android devices. APP available through June 30, 2020. Updates affect compatibility. For ages 8+ and retails for $75.00 CDN. 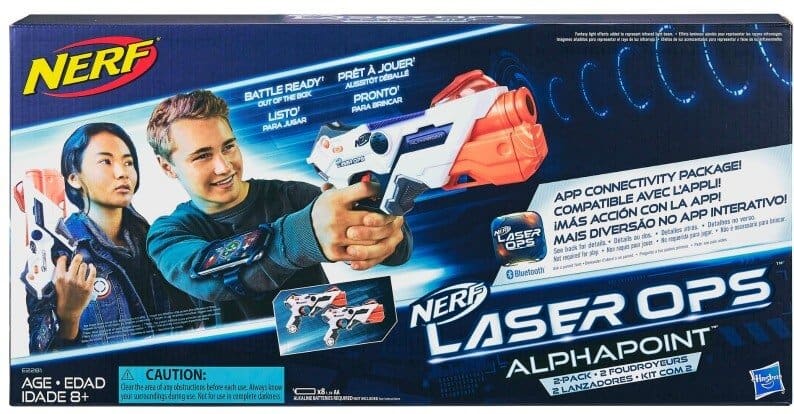 Double your laser tag fun. The Nerf Laser Ops Pro AlphaPoint Blaster 2-pack gives players everything they need to face off in head-to-head live-action laser battles right out of the box! The Nerf Laser Ops Pro AlphaPoint blaster includes 2 blasters and 2 armbands and will require 4 AA batteries – not included. Just a note – they are not reverse compatible with older Nerf brand laser tag blasters.

These bad boys are a lot smaller and lighter than the Deltablaster, but still has some of the same cool features. You need to turn your blaster on and decide whether you’re playing on a team (red or blue) or free-for-all (purple). It also has the indoor/outdoor mode, fire trigger, and an unlimited reload button. There is also a speaker on one side that emits laser sounds. 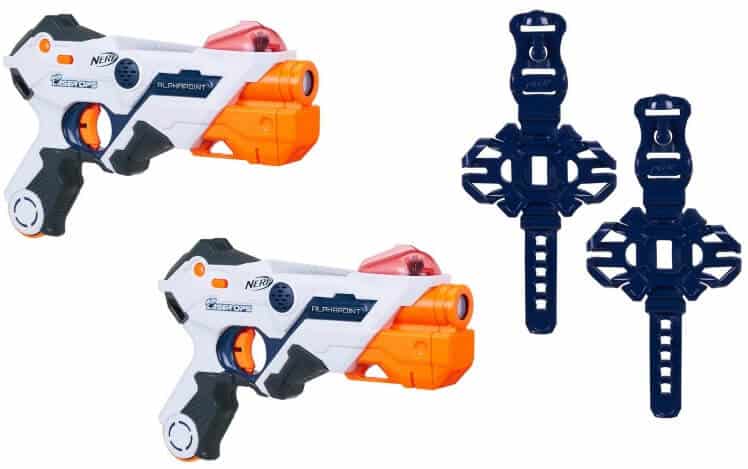 With each trigger pull you’ll get a plethora of information, it fires a single-shot IR burst, register hits with lights and sounds, displays health status, and ammo capacity. The indicator display is simpler than the Deltablaster, you don’t see visual numbers but instead, the colors will change to indicate your health status and ammo capacity. We found these lights piercing and hard on the eyes, especially at night. But, this blaster is not recommended to play in complete darkness.

The front of the barrel has the LED infrared emitter lens which is where you shoot from. Your goal is to aim for your opponent’s IR receiver. If you hit it, you affect your opponent’s health.

When combined with the cool NERF LASER OPS app the laser performance is better and can be customized to track your performance, earn power-ups, and detect your enemies. The app can be downloaded on either the Apple Play Store or Google Play Store. It’s easy to use and it allows you to choose a single-player or multiplayer. Just like the Deltablaster, you’ll need the smartphone solo attachment to experience a live-action battle. Recommended for ages 8+ and retails for around $60 CDN.

Backyard battles are more high-tech and sophisticated than ever with the new versions of Nerf Laser Blasters. No darts, no pain, no worries. Game on!

Disclaimer: I received Nerf products to facilitate this post. All opinions are my own, yours may differ.