We’ve all heard the saying, ‘you are what you eat,’ umpteen times over the years. Our diet affects more than just our waistline, it determines how our organs function, brain health, skin appearance, our moods, and even our teeth. In essence, our diet affects our overall health, but it goes much deeper. Did you know it can affect even any intuitive or psychic abilities you may have? My newest book, Nutrition For Intuition share what foods and beverages will not only boost your natural intuitive abilities but will improve your physical health as well. 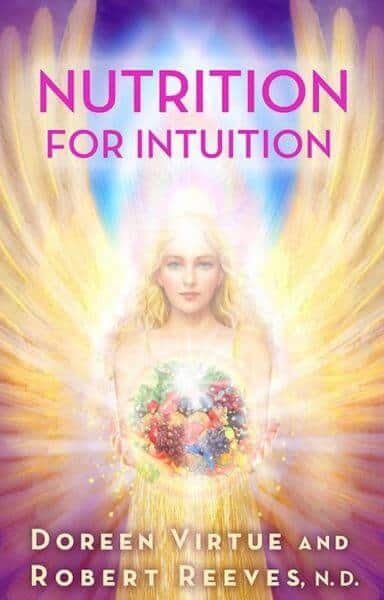 We all have this natural ability called intuition or sensory, but most of us do nothing to hone it. Those who were born with this attribute, as both authors were, noticed that their abilities dimmed when they ate and drank low vibration foods. In fact, when Doreen overindulged in junk food, she gained weight, and her visions stopped. But through prayer, visions, guidance, and psychology classes she gleaned insightful knowledge about which foods will turn on intuition and which will turn it off. Robert starting partying, clubbing, and eating unhealthy foods, and the cost was headaches, feeling like he was hungover, and losing the crispness of his craft. The fast foods were blocking Robert’s intuition and preventing him from seeing his angels. He quickly learned how foods affect his ability.

Both of these intuitive authors have gathered insightful knowledge about which foods will heighten and expand our intuitive ability. Part I explains how intuition works and the four clairs, clairsentience (feelings), clairvoyance (visions), clairaudience (sounds), and claircognizance (thoughts). Part II offers general advice on how to eat and which specific foods, liquids, and herbs will enhance your abilities. Part III discusses the power of detoxifying, chakra clearing methods, and how to call upon the angels for help.