Hallstatt is an enchanting postcard-perfect village that’s nestled between the Hallstätter Lake and the lofty Dachstein mountains. It’s located in the Salzkammergut Lake region and has 7000 years of history. Its name Hallstatt owes its existence to rich salt deposits, which have been mined there since the days of the Celts and Illyrians. (Hall means salt and Statt means place) 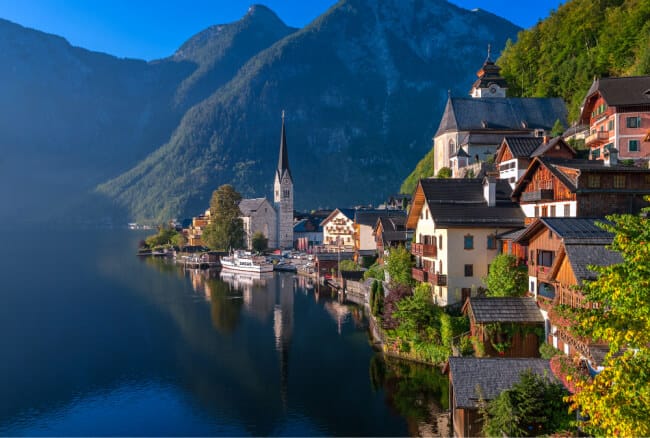 Although Hallstatt only has 950 residents, it’s maintained and managed skillfully to handle the deluge of tourists they attract every year. Many people describe Hallstatt as the “world’s most beautiful lake-side resort”, and I’d have to agree.

The small historic market square truly expresses the natural fairy tale ambience of this charming little village. You can’t help but be mesmerized by the lovely cluster of the homes that are built right into the mountains. Each one is entrancingly decorated with traditional flower boxes and gorgeous foliage. 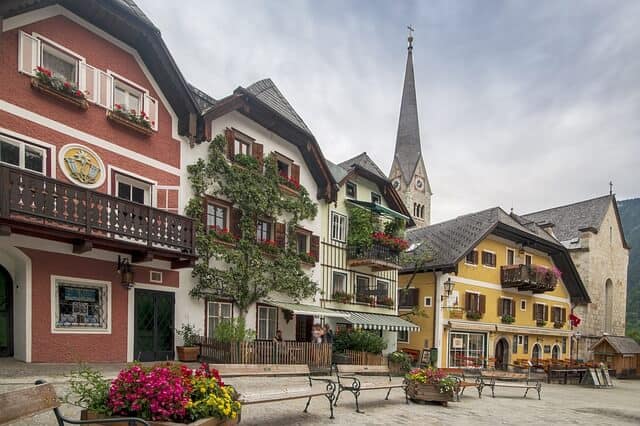 There are several restaurants or cafes where you can relax, enjoy a meal and soak in the moment. You can also swing by their souvenir shops and pick up a memento, or find a bench and take some stunning holiday photos.

The best way to capture Hallstatt is from a boat gently drifting along the Hallstätter Lake. You have the option of taking an excursion, private boat tour or renting a rowing or peddle boat and leisurely stroll the waters. There’s no question you’ll get a better perspective of the impressive landscape from afloat the dark green shimmering lake. 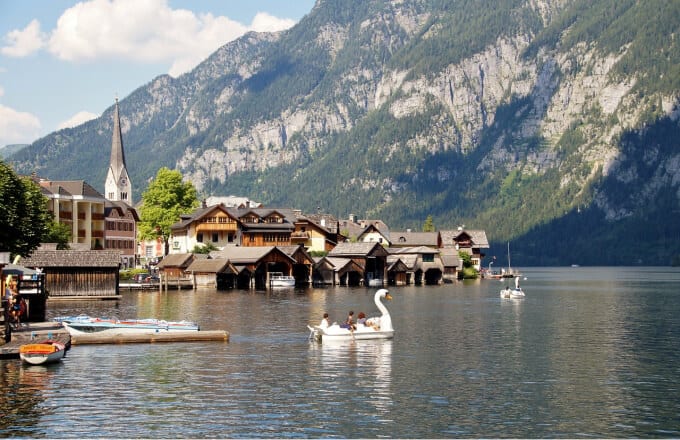 The east shore is lined with lots of bike trails, hiking paths, wooded mountains, lush meadows, and spectacular scenery. Exploring Hallstatt on foot is an experience not soon forgotten. It’s filled with lots of steep steps and walking paths, so wearing a good pair of shoes is a must.

You’ll also want to take some water and a camera to capture the panoramic view while you’re taking a breather. Each home maintains its traditional style. Many villages, towns, or even cities will not allow you to build a modern designed home; it just wouldn’t fit in with their character or their culture. One of their famous sites to see is the historic Rudolphsturm. It was once a medieval fortification tower that defended the mining area against invaders and dates back to the 13th century.

To reach the Rudophstrum and the Salt Mines, you can take a ride on the Salzergbahn funicular railway. It takes 3 minutes to climb 1181 feet up the mountainside, and the views are magnificent. Today Rudolphsturm is a family restaurant that boasts the most spectacular views. Sit on their terrace, order a splendid meal, and enjoy the surrounding. Walking to the Rudolphsturm itself is a magical experience as you cross the lookout bridge which spans across a small gorge hundreds of feet below you.

After having lunch at the Rudolphsturm, take a Salt Mine tour. The Salzwelten is the oldest mine in the world, dating back 7000 years. Tours are from April to September and take about 2 hours.

A path leads to the tunnel mouth and into a unique underground world-first dug by hand more than 3000 years ago. As you take the tour, you’ll experience the many kilometers of tunnels that lead deep into the rock interior. The atmosphere is filled with the energy of hard-working miners who labored and etched out the rock face so very long ago.

Another attraction is The Michaels Chapel. Hallstatt’s “Bone House” has been in existence since 12 AD. Kept in this charnel house are 1200 human skulls, of which 610 of them have been lovingly hand-painted. Each skull is also arranged according to individual family groups and have the dates of death marked on them.

In former times cremation was not allowed, and with the graveyard in Hallstatt extremely small and no physical space for new graves to be dug, a dilemma existed. A resolution was made; ten to fifteen years after burial, graves had to be re-opened, and the skulls and long bones which took up so much space were removed. The skulls were cleansed and then left outside in the sun and moonlight until all that remained of these gruesome skulls was a smooth ivory finish. 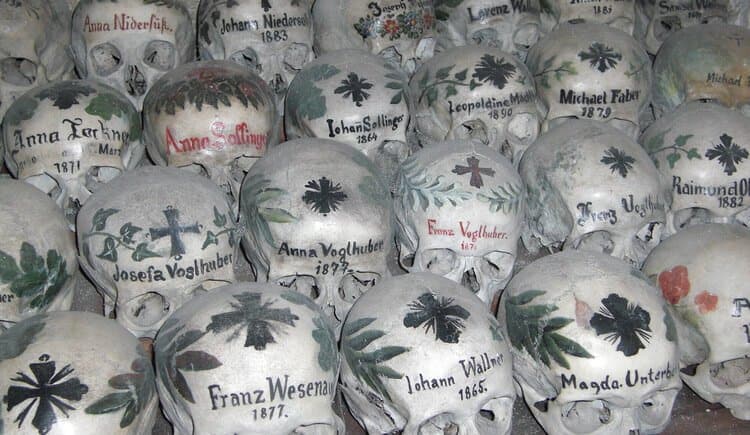 If you’re looking for a bit of excitement and want to take in some breath-taking Alpine scenery, then the UNESCO World Heritage region of Hallstatt Dachstein Salzkammergut will check all the boxes.

The World Heritage Skywalk floats breathlessly 350 meters above the village of Hallstatt. It offers a heart-pounding panoramic view of Lake Hallstatt and the surrounding area.

Hallstatt is a place of serenity and beauty and an ideal vacation stop. Whether you’re a nature enthusiast, ardent hiker, traveling alone or with your family, you’ll enjoy exploring the peaks and paths of the Salzkammergut Lake area. We love this area! It’s so Alpine; you want to yodel!