Elmo is the beloved furry red character that made his debut on Sesame Street. Since that time, he’s become a celebrity in his own right. Hasbro has released many versions of Elmo over the years, and millions adore them. If you’re like me, you’re drawn to his endearing personality and want all varieties of him. Well, you’ll be thrilled with the new version that hit the toy market recently, it’s called Play All Day Elmo.

Play All Day Elmo is cuddly, lovable, charming and very interactive. I had to laugh when I first got this Elmo. He was set on demo mode and when I squeezed his nose while he was still in the box and he said, ‘Elmo wants to play with you, can you take Elmo out?’ If you don’t take him out of the box, he’ll say, ‘okay maybe we’ll play later.’ I was tickled he sensed he was still in the box.

Play All Day Elmo has over 150 responses and plays 8 different motion-based games. He comes in two modes, toddler and preschool and the responses for each are age-appropriate. The modes can be switched at the back of Elmo’s head. This is also where the 4 AA batteries are stored; they’re secure behind a protective plate so children cannot reach them. 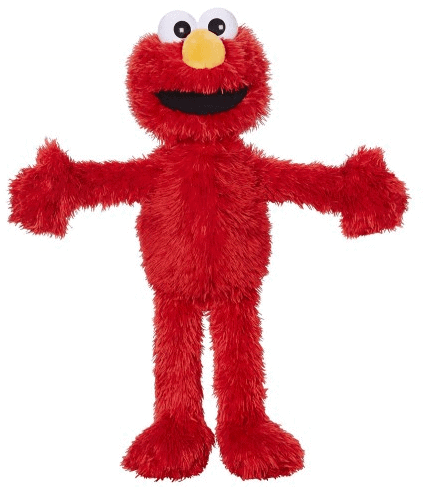 Elmo responds to touch and reacts differently to each one. Tickle his tummy and he giggles! You can also move one of his hands to his tummy, to his face, or hold his hands together. You can jump, hop, dance, wiggle, and run with Elmo and he loves it. He talks, sings, and even whispers. Elmo welcomes lots of hugs and kisses too!

For toddlers, Elmo offers simpler play, like tickling which will make him giggle, or squeezing his nose which will create various noises. He’ll also sing different songs, and give kids instructions, like ‘turn Elmo upside down.’

For preschoolers, the games are more active. Each of the 8 games starts by squeezing Elmo’s nose. He’ll tell you the name of the game or activity and share the rules. There’s also a nap mode where Elmo talks about the lovely day he’s had and then he sings a sweet little lullaby. We love Play All Day Elmo and would definitely recommend him, especially for the holidays. Suggested ages: 18 months – 4 yrs, but for kids of all ages.