Kids love to emulate superheroes. They breathe, eat, drink, and sleep their favorite superheroes. They are completely aware of their conduct, their powers, talents, abilities, whose side they are on, and their true identity. Superheroes are captivating and they allow kids to unleash their vivid imaginations in role play. Kids can harness invincible powers, do amazing feats, and be ready for any battle. They can take on any diabolical antagonist and nefarious villains who dare to step in their path. Ironman is one of the most icon superheroes and kids want to be him. Now they can with the super cool Playskool Heroes Marvel Super Hero Adventures Iron Man Headquarters Playset. 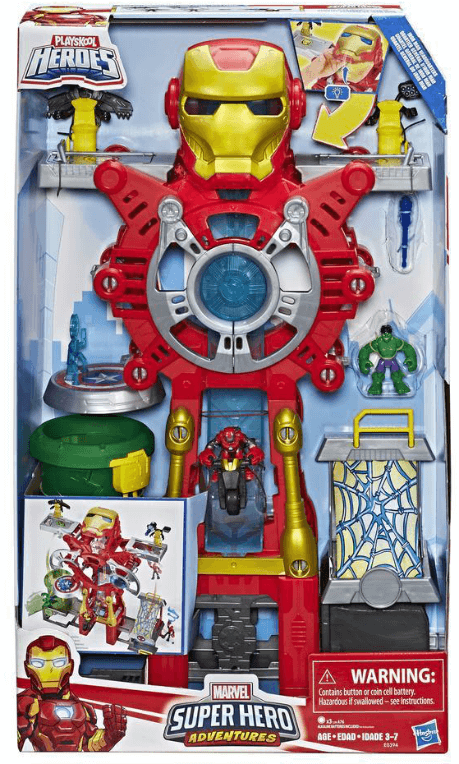 Power up the Avengers! This Playset comes with an Iron Man and Hulk figure, power up arms along with 2 additional sets of power up arms, a motorcycle, one projectile, and a user manual.

The Iron Man’s headquarters is huge! It’s a covert location with a personal laboratory where he built his suit and other ridiculously cool gadgets. Both Iron Man and the Hulk figures can fit comfortably on the motorcycle and be placed in strategic places in this headquarters. Their heads, arms, and legs move, plus you can remove their arms and snap them on other Avenger figures. And the motorcycle is mobile with moveable wheels. Secret code: heroes.

If you lift the faceguard on the Headquarters, the chest plates will open and a blue light will flash. If you press the button on his ears, the blue lights will also flash. There is a secret place in the helmet for Iron Man and his motorcycle. Press a lever behind the mask ears and Iron Man on his motorcycle will race down a chute. Awesome! 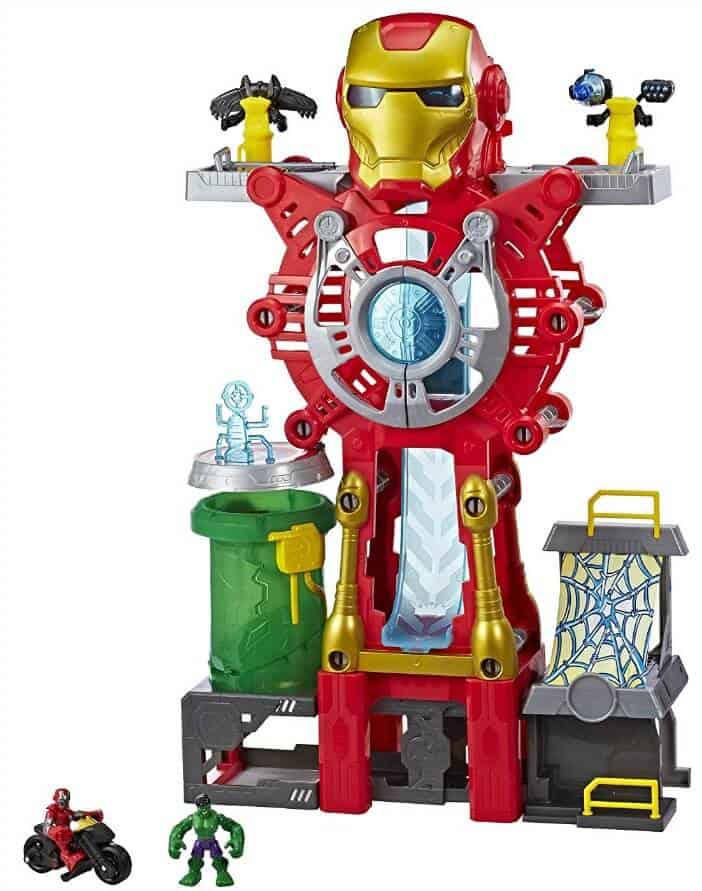 On one side of the headquarters is the Spider Man’s web launcher which acts like a super spring trampoline. Underneath it, he has a digital looking screen that shows where he has to go if help is needed. On the other side is the Hulk’s gamma chamber with an enclosed trap door so he can crash out. Underneath both areas is a free space for hanging out or hiding. Between them is the adjustable motorcycle ramped mentioned earlier. Both sides can be pulled out for a wider play area and pushed back in when finished.

Going up a level, and on the left side, you have Captain America’s podium with a spinning shield. Captain Americas does not come with this set, but you can buy him separately. On the very top, there are two more platforms. On one side is the Black Panther, the other side made room for the Black Widow. Kids will have a blast as they jump into action to fight the bad guys with this multifunctional playset.