Exploring the breathtaking alpine countries is an experience that will leave you in awe. The Tyrolean Alps, panoramic scenery, deep blue pristine lakes, storybook castles, traditional folklore, and rich history are drawing factors to tens of thousands of tourists every year. And, I am one of them. I love Europe, but I must surreptitiously confess that Germany, Austria, and Switzerland are my favorite countries to visit. It’s so easy for me to get immersed in their cultures and lost in their ambience.

One of my favorite places is in the heart of Germany; the picturesque Bavarian capital city of Munich. Munich is well known for several attractions, the annual Oktoberfest celebration, the famed Hofbräuhaus, the Beer Gardens, the German Museum, the Olympic Stadium and the most famous of all, the Rathaus-Glockenspiel. 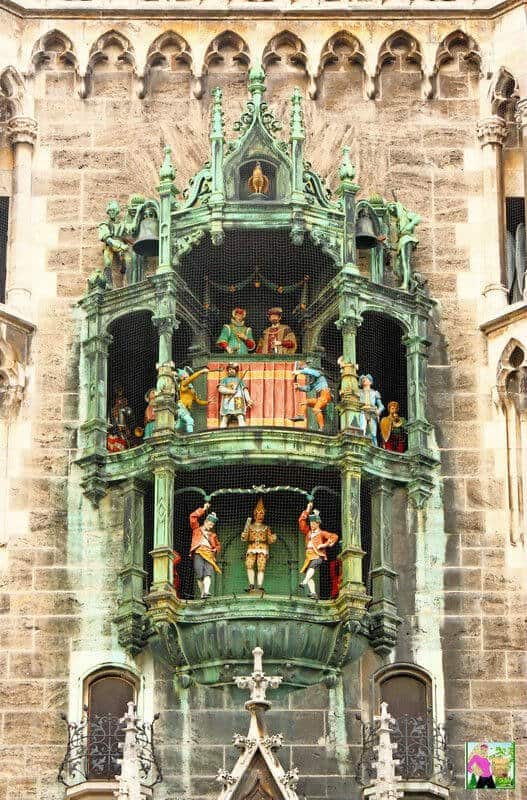 The Glockenspiel (which means bell play) is an ornate musical clock located in the center of the pedestrian-only, Marienplatz square. It’s part of the second construction phase of the New Town Hall dating from 1908, so it’s not very old. 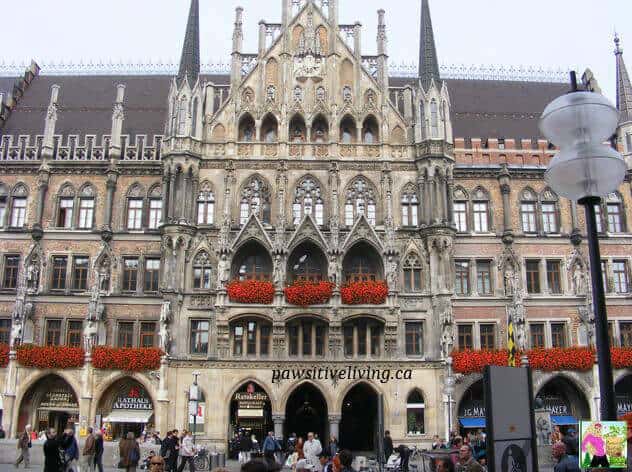 The Neue Rathaus or New Town Hall is the seat of the mayor’s office, city council, and headquarters of city administration. The Old Town Hall was completed by Georg von Hauberrisser between 1867 and 1874. With the swift growth of the city, annexes had to be built to accommodate this expansion. They were erected between 1899 and 1903 and run along Dienerstraße, Landschaftstraße, and Weinstraße.

The Glockenspiel’s performance is well worth seeing. It chimes and re-enacts two stories from the 16th century. It consists of 43 bells and 32 life-sized figures. 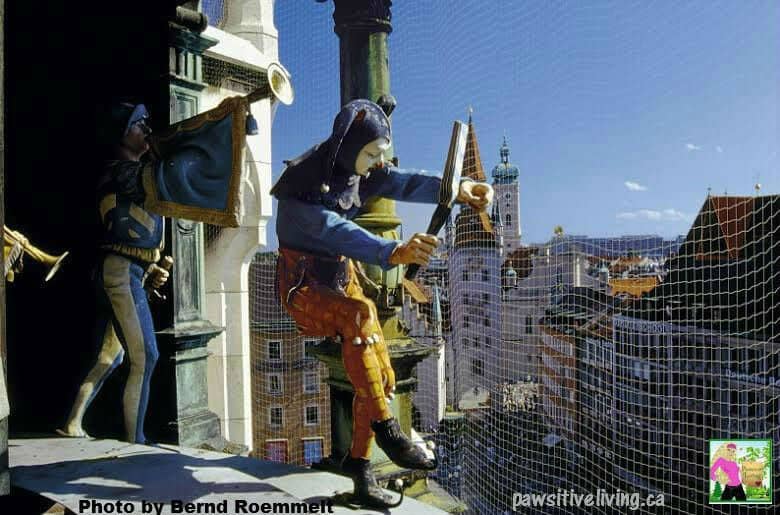 The top half shares the story of the marriage between Duke Wilhelm V and Renata of Lorraine. Incidentally, the infamous Hofbräuhaus was founded by the Duke of Bavaria. 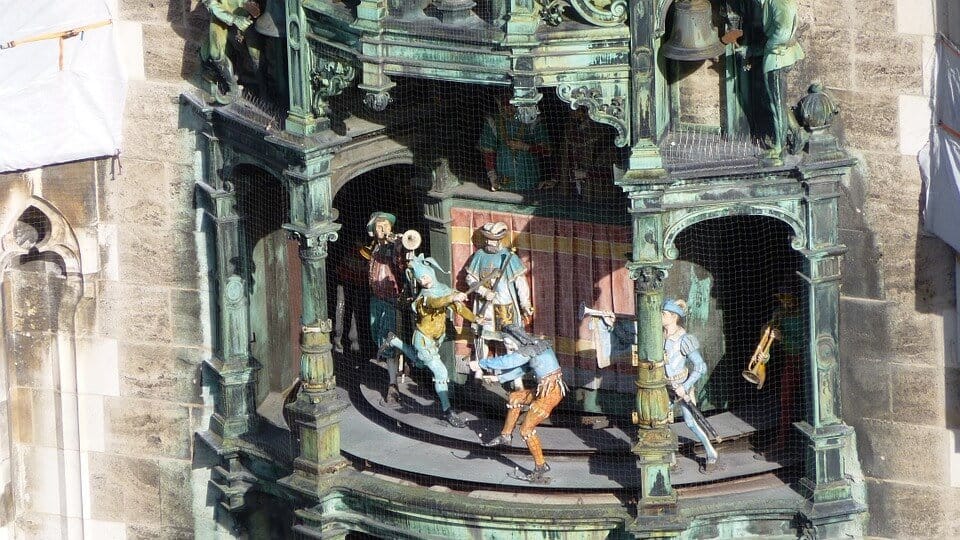 The lower half honors the newly wedded couple with a joust using life-sized knights on horseback representing Bavaria (in white and blue) and Lothringen (in red and white). The Bavarian knight wins every time, of course. 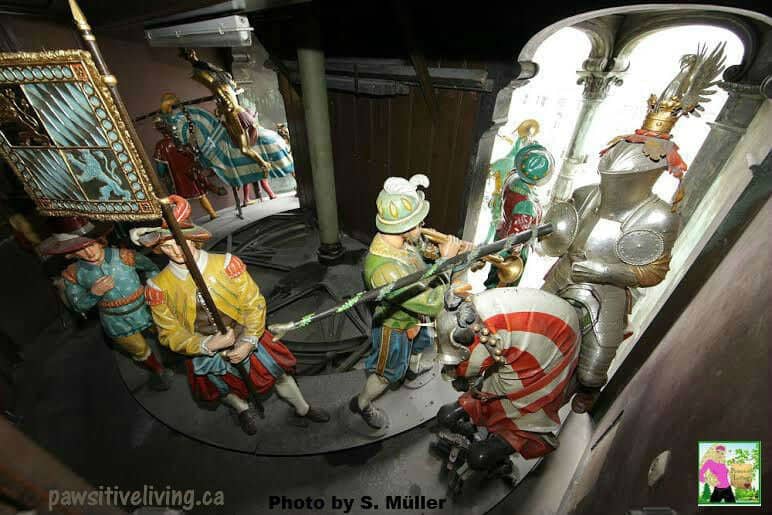 The above photo shows the inner working of the characters. You can take an elevator up to the top of the spire for a few euros to experience this in person. What a stunning view. 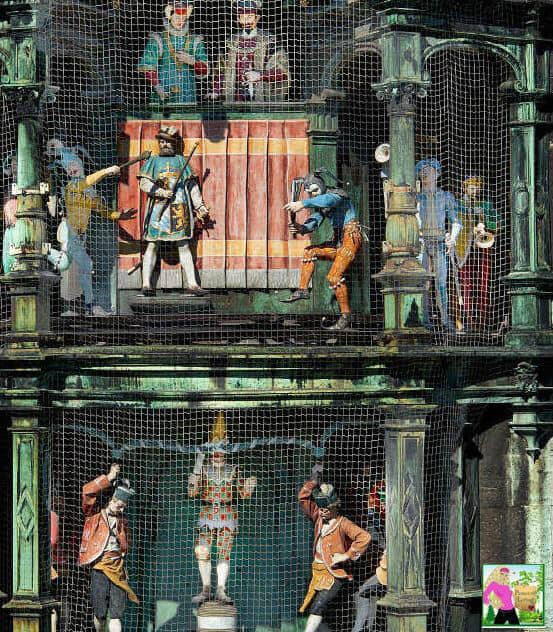 Both levels twirl and entertain all viewers, and you can watch this spectacular show daily at 11:00 a.m., 12:00 p.m., and 5:00 p.m. (the 5:00 p.m. show is omitted from November through February). In addition to the well-known cooper’s dancers, the Münchner Kindl (symbol of the city’s coat of arms), and the angel of peace also make an appearance in the almost 12-minute-long spectacle. 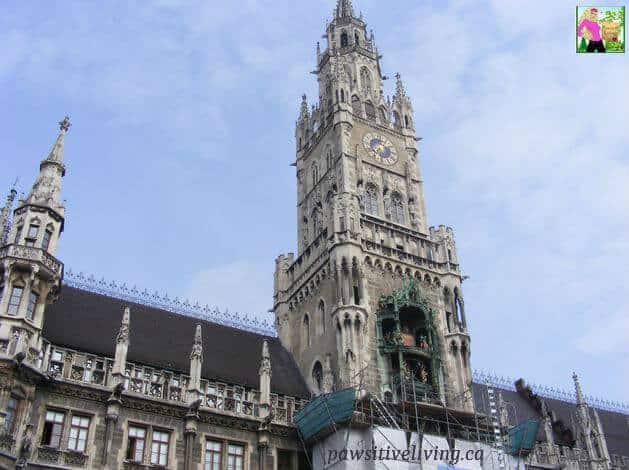 I was a little disappointed with all the scaffolding around the building. Pollution and smog leave a film on the building that must be removed in order to preserve them. I just happened to catch the year they were cleaning the Rathaus. That being said, I along with a thousand other onlookers, was still thrilled to experience the Glockenspiel in action. It’s well worth the trip to see it.

After seeing the sights in Munich, there are numerous day trips and excursions you can take to see churches, castles, and other cultural highlights. Or visit the local shops and pick up a few souvenirs. Habe Spaß! Ich Liebe München!