Rothenburg ob der Tauber is one of the oldest and most historic, well preserved medieval towns in the Franconia region of Bavaria, Germany. Walking through its gates is like stepping through a magical portal into another dimension. You’re instantly transported back to the 15th century where the atmosphere is thick with an unequivocal medieval presence. Time is frozen for all eternity, and it feels surreal! 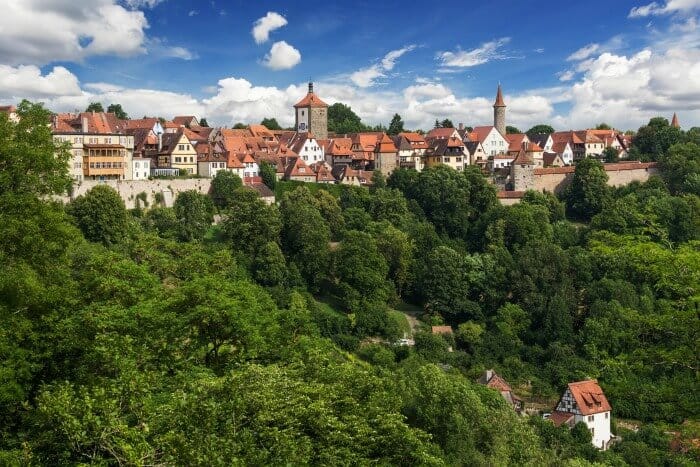 Rothenburg is situated on the Romantic Road between Wurzburg and Dinkelsbuhl and captivates thousands of tourists every year. I’ve visited this beautiful town a few times, and I found myself enthralled by its history and ambience each time. It’s a town where the Grimms brothers could have easily found inspiration to create bewitching and beguiling fables, fairy tales, and folklore.

Its name Rothenburg ob der Tauber means “Red fortress above the Tauber,” rot (red- the color of the roofs), ober mean over, and burg (burgh, medieval fortified settlement or today means fortress or castle). Plus, Rothenburg is located on a plateau overlooking the Tauber River, hence its name. 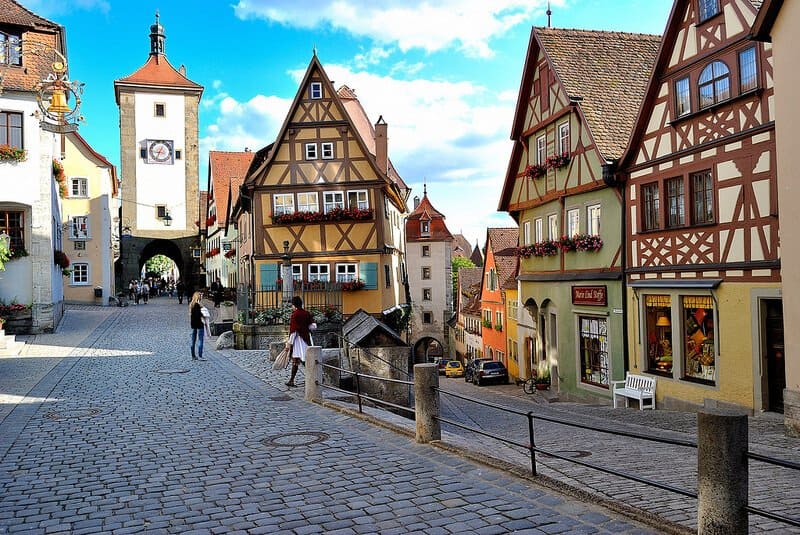 The image shown above is Das Plönlein or Little Square. It’s the most famous picturesque image that has donned Rothenburg postcards for decades. This narrow traditional building with a small fountain in front is framed by the Kobolzeller tower and the higher Siebers Tower. Plus the skillfully restored townhouses to the right and left create a charmingly striking effect. 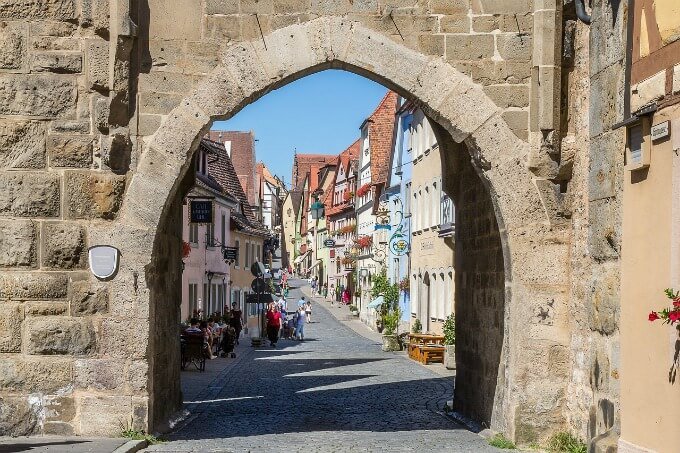 Rothenburg dates back to around the year 970 AD. When the original rulers died out, the castle and neighboring town came into the hands of the Hohenstaufen Emperors of Germany who granted it an official town charter in 1172. A century later it was elevated to a Free Imperial City and became one of the most important city-states of the Middle Ages. Rothenburg used this status to increase its influence significantly until 1803. The town then fell to the Kingdom of Bavaria as part of Napoleon’s land portioning.

I summed it up swiftly here, but Rothenburg has had a long colorful history with lots of ups and downs with conflicts, sieges, and wars, including the 30-year war and being bombed during WWII. In 1631, during the Thirty Years War, Rothenburg was taken by imperial troops. It is said that Ex-Mayor Nusch quaffed down nearly 13 cups of wine in a single gulp, the so-called “Master draught”, in order to save the town from pillaging Catholic forces under Count Tilly.

Then on March 31, 1945, forty percent of Rothenburg was bombed by allied forces, but because it was a cloudy day, they were spared complete destruction. The toll was still devastating; 39 lives were lost and 306 building, 6 public houses, nine watchtowers, and over 2000 feet of the town wall were destroyed. After the ravage of WWII, the residents have passionately rebuilt and restored this enchanting town to its original beauty, thanks to donations from around the world. This remarkable feat is deemed the most significant achievement in Rothenburg’s recent history.

Rothenburg’s old town charisma will entrance you with its half-timbered houses lined with cobblestone lanes. Most of the important buildings date back to the period between the 13th and 15th centuries. Oh if each stone could talk, the historic secrets they would whisper. Painstaking work that went into restoring and preserving house fronts, fountains, gables, bay windows, and street signs.

As I strolled through these well-maintained narrow pathways and alleyways and ogled the closely packed homes, I envisioned and got a sense of what it was like to live there lifetimes ago. 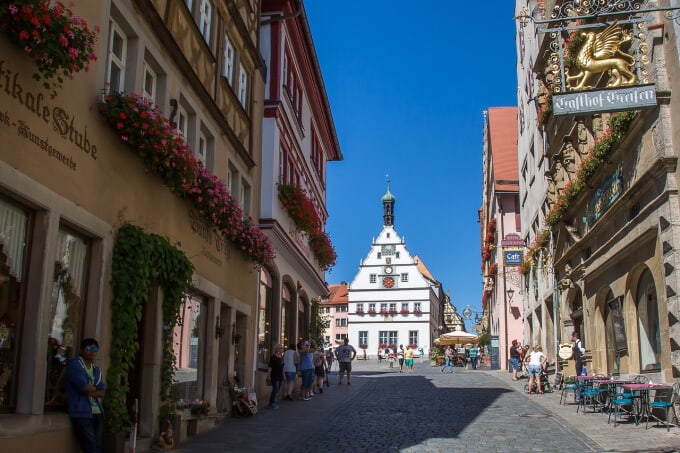 You can’t help but feel Rothenburg’s historic vibe as you’re exposed to its rich past around every corner. I was mesmerized by the quaint little cottages whose outer architecture has not changed in hundreds of years. I’d love to see inside some of these homes one day. I understand that most of them have been upgraded with modern conveniences.

In the middle ages, most people couldn’t read, so shopkeepers used gilded signs so everyone could find their shop. Today, whether a bakery, pharmacist, restaurant, or Inn, these artistic and creative signs are still crafted and used for the same reason.

The Ratsherrentrinkstube (City Councilor’s Tavern) dates back to 1446 and is the place where city councilors would strategize and drink beer. The clock was added in 1683. Since 1910, the two windows on the left and right of the clock, open every hour with a reenactment to commemorate Burgermeister Nusch’s legendary Master Draught. In jest, Count Tilly promised to spare the town if Nusch could chug down a whole tankard of wine in one go. The rumor is that Nusch slept for three days afterward.

The Hegereiter house Spitalhof is the site of the former hospital area. The architecture of this building is eye-catching with a lovely steep, canopied roof and narrow tower with its decorative lantern-style turret. This used to be the site of the infirmary kitchen, with the manager of the various infirmary properties living above. The inscription next to the coat of arms on the building will reveal the mark of the famous Rothenburg stonemason Leonhard Weidmann.

St. George Fountain was built in 1608. The well beneath is 8 meters deep (26 feet) with a 100,000-litre capacity, making it the largest fountain in Rothenburg. All fountains in Bavaria are encased in wooden houses during the winter months for protection. But in Rothenburg, they use glass so you can view it year around. 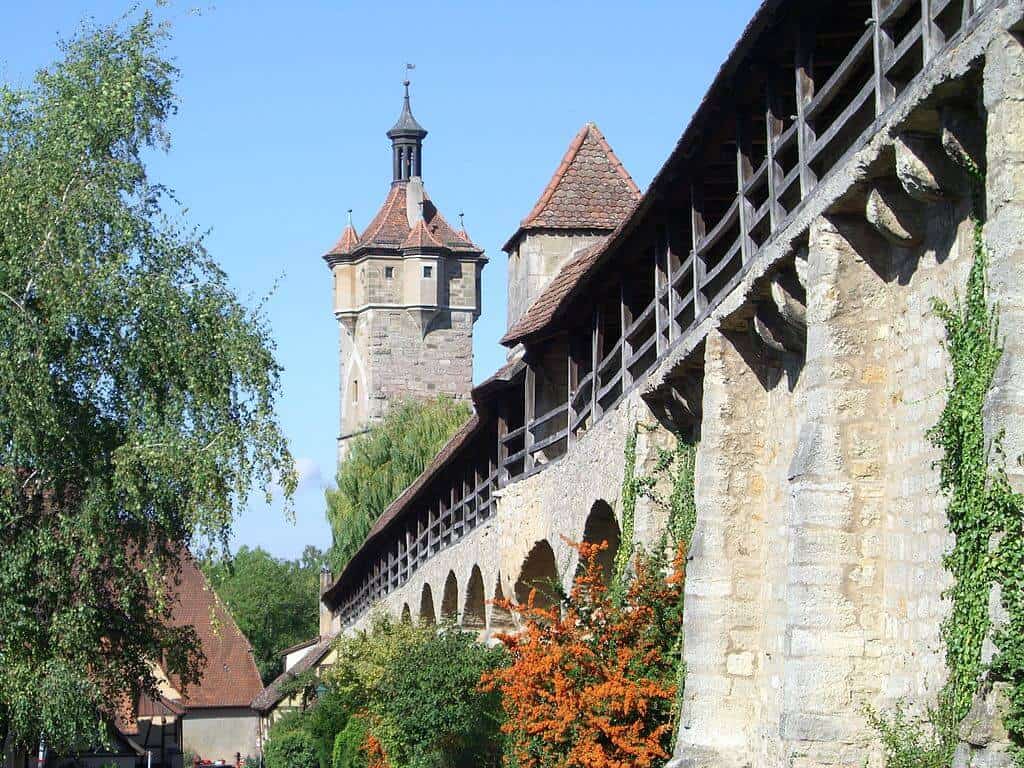 Around 1170, the first fortified ring was built, along a market square, town church, and the headquarters of two orders of knights. Two gate towers were built as part of the first expansion of the town in 1204, increasing their fortification from 1400 m to 2400 m in length.

The Kobolzeller Tower secured the entrance to the town from the Tauber Valley. The Siebers Tower was built from dressed quarry stones, and it protected the southern gate until the Infirmary Quarter was incorporated within the town fortifications in the 14th century. The Town Wall includes many preserved gatehouses and towers, 42 in fact, plus a covered walkway on top. These medieval towers allow visitors the opportunity to climb and walk around almost the entire town and capture breathtaking panoramic views. Taking a jaunt around the wall takes about an hour.

The Castle Garden is located where the Imperial Castle once stood. The castle was completely destroyed by an earthquake in 1356, and the stones were used to build the now glorious city walls.

Today visitors can amble through the grounds and enjoy the beautifully crafted gardens. There’s an outer path that will lead you to some stunning views, that will take your breath away. 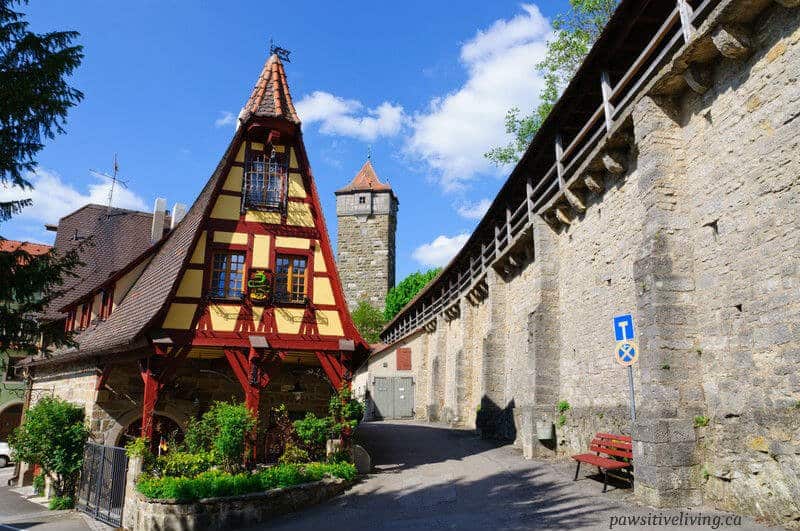 There are lots of interesting attractions to see that will shed some insight into Rothenburg’s rich and resourceful history. Old Smitty dates back to 1649 and is deemed one of the loveliest buildings in Rothenburg.

The Dunking Stool was used to punish bakers whose bread was too light. The dishonest bakers were dipped into the well in the Market Place to be shamed in front of all the residents. It’s now housed in the Criminal Museum.

Rothenburg offers everything you’d need to make your vacation a comfortable and enjoyable experience. Their resources include hotels, inns, guest homes, sidewalk cafes, restaurants, and bakeries to souvenir shops. It’s incredibly busy here from April to September so be prepared for crowds and tour buses. We like to take our vacation in the Autumn so I can only share what it’s like in September and October. There were large crowds, but it was pleasant and we loved every minute.

We met lots of awesome people from all over the world, and those are memories I will always cherish. I have deep gratitude for those who restored this notable and whimsical town. I come from a long line of German ancestors, and I would like to think I’m retracing the steps they once took in Rothenburg. If Germany is on your travel wish list, then visiting Rothenburg is a must-see. It’s been voted one of the top places to see in Germany. It’s a small town with a big reputation, and I completely agree.