Most of us were introduced to classic novels and classic literature at a very young age. These stories are written with depth and filled with eloquent words, intriguing plots, and sometimes confusing language. Ever try to read Shakespeare or older versions of Sherlock Holmes? It’s not easy, so these pretty embossed books sit on our library shelves waiting to be rediscovered.

The way people spoke a hundred or more years ago is almost like reading a foreign language today. Many of us are unable to totally comprehend the gist of the story, so we put the book away. But, now many stories have been rewritten in our current English so we can enjoy the book. Plus, there are more in-depth books that explain the history and storylines of these classic stories. DK Books brings to us the works of both Sherlock Holmes and Shakespeare in a simple easy to grasp format, so we can understand their somewhat complex content. 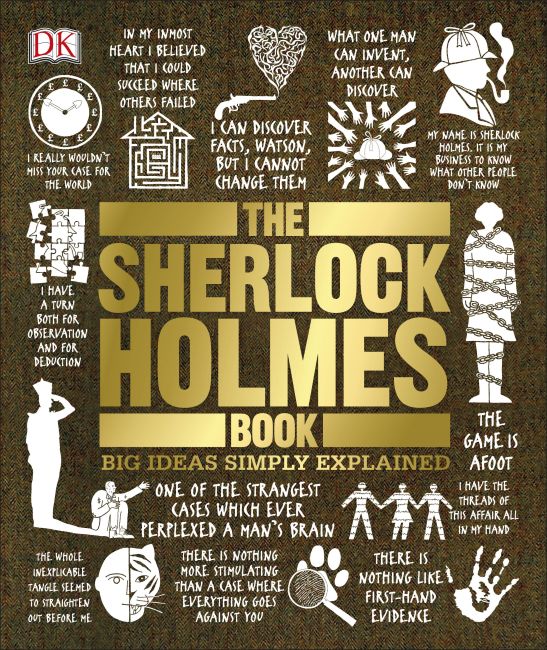 It was Sir Arthur Conan Doyle who thrilled us with stories about Sherlock Holmes as featured in the Strand Magazine. Living at 221B Baker Street, he’s recognized as the most popular detective in the world. The game is afoot! Using clues and deduction, he and his trusted companion, Watson, we’re able to figure out how people tick and solve any devious and diabolical crime put before them. It’s elementary! Several Sherlock Holmes movies and television series have entertained us over the years, but we never tire from reading his classic novels.

The Sherlock Holmes Book is a compendium and treasured guide about the life of this consulting detective and the many cases he solved. It divided into seven different sections, the Introduction shares Conan Doyle’s life and how he went from doctor to writer. A flow chart shows Conan Doyle’s life from birth on May 23, 1859, to his death on July 7, 1930. Includes when he wrote specific Sherlock stories, his marriages, being knighted for his service in the Boer War, and his interest in spiritualism. It also shares information on Watson and Moriarty, a Machiavellian criminal mastermind whom Holmes detests.

As if looking through a magnifying glass, this book examines each Sherlock Holmes story in a broader context. You’ll get play by play, step by step, blow by blow as each story progresses, right down to the minutest detail. There is an explanation in the margins for each story, so at a glance, you can surmise what type of story it is, when it was published, the collection it belongs to, and who the title characters are. It also exposes how Sherlock discovered clues, expanded upon them, followed up on each of them, and finally reached a conclusion. There are some actual photos, lots of illustrations, and charts to help readers follow the storylines. 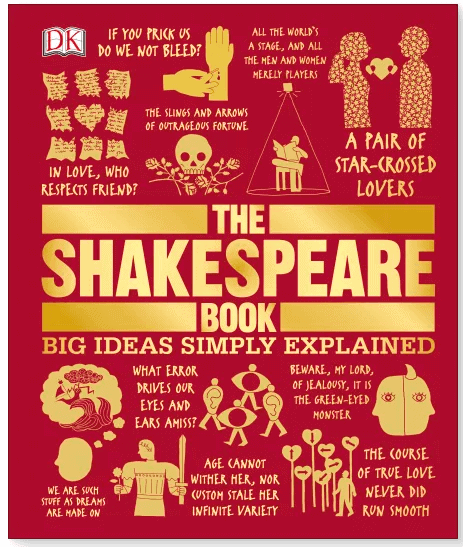 To Be, Or Not To Be, that is the question! Like many, I found Shakespeare hard to decipher without a teacher or a cheat book. Shakespeare, also known as the Bard of Avon, was a famous 16 – 17th-century playwright, poet, and actor. From tragedies to comedies to historical plays, his prose, plots, and characters have survived the test of time and are still studied by students and acted out in theaters today.

The Shakespeare Book is a comprehensive guide about everyone one of his plays, including his major poems and best-loved sonnets. The Introduction of the books share insight into his life – where he was born, that is father was a prominent businessman, when and who he married, and how he became a successful playwright.

This book offers a portion of each of his plays, disclosing pertinent information about their themes, a succinct description of the principal characters, a breakdown of each scene, and a full outline of their plots. Each play also has information in the margin that shares a theme ( jealousy, hope, love), setting ( winter in Sicily, ancient Rome) and it’s sources and legacy. There are lots of flowcharts, timelines, plot diagrams, illustrations, and live performance photos that make this book mesmerizing.