Toys are a big part of almost every holiday shopper’s Christmas list. The kids have been making their wish list for a few weeks or longer and they know that Santa only delivers Hasbro toys to those who have been nice all year. And Hasbro has some super cool toys out for this festive season. Check out the awesome Spider-Man Mega City Playset. 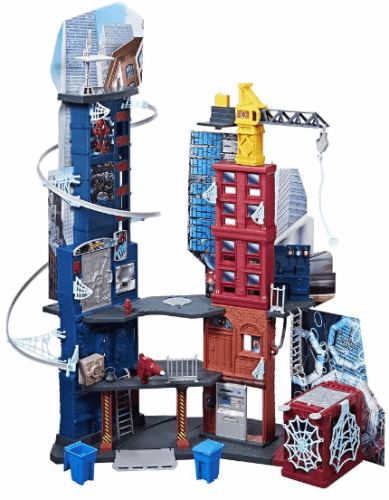 The Spider-Man Mega City Playset offers 46 inches and 5 levels of ultimate web-spinning and hardcore spidey action. The playset definitely has a New York vibe to it, and we know that is where Peter Parker lives, works, and fights crime as the superhero Spider-Man. There are lots of webs on all the levels so you know this is Spider-Man’s man cave.

Each level has an element of surprise from trap doors to a spinning crane. To get from the top level down to the bottom, hook Spider-Man to the zipline and watch him can swoop down on his enemies. The lower level has an ATM machine which is a secret door for Spiderman’s elevator — the elevator is on the backside of the tower, a car ramp with a blockade, a ladder, a villain prison with a retractable button that drops bad guys into the cell and an exit to the subway. Venom and Electro, you don’t have a chance!

The second level has a cool missile launcher that actually fires missiles, a balcony, and a cool pad. The third level has Spiderman’s secret lab where he creates his web-shooting formulas. He accesses this secret lab through the elevator at the back of the tower. This level also has a vault door that blasts off. Behind the door is a safe and a bag of loot ready for the taking. It also has a fire hydrant, BUT watch out for that manhole cover, it’s a trapdoor.

The fourth level has a moveable crane that spins all the way around. There’s a long rope attached to the crane that can move all kinds of heavy stuff or Spiderman can swing from it. The very top level offers a bird’s eye view of New York – the bad guys won’t get away.

There are also several little accessories that the kids can be put anywhere they feel is perfect. They’ll have a blast fighting crime with Spider-Man. The kids will need a lot of adult help putting the playset together, but it’s fun watching the New York hood come alive.