To many, Star Wars is the most epic space series ever created. Its fan base has extended into three generations of disciples, and it’s still growing strong. Whether we’re an old school diehard or a newbie Star Wars fan and collector, we perk up when there are new releases, especially toys.

Star Wars Episode VII – The Force Awakens was released back in 2015. This movie introduced us to some new and endearing characters that will no doubt be part of future movies. Plus, there are some cool characters from Star Wars Rebel that have hit the market. This animated entry in the “Star Wars” franchise fills the gap between the events of “Episode III” and “Episode IV”, and fans are loving it. Check them out. 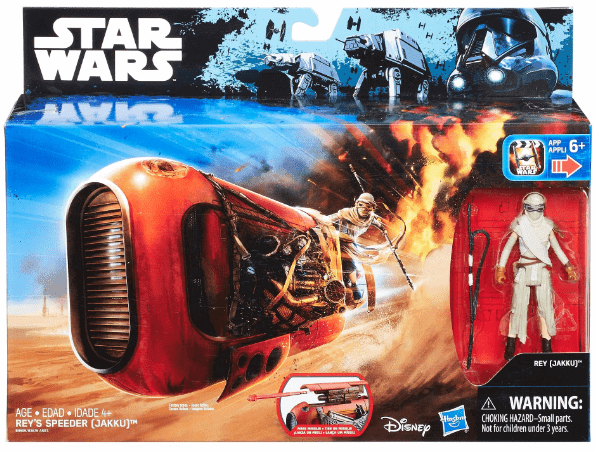 One of my favorite characters in The Force Awakens is Rey. Her independent spirit, street-smart savvy and sense of justice make her a good role model. Hasbro created a special edition of the iconic Jakku Speeder that Rey used to scavenge parts off wrecked space crafts in the junk-strewn dunes. Rey herself salvaged this old speeder so she’d have some means of transportation.

The toy comes with a detailed Speeder, Rey action figure in her gear with a weapon, one firing missile, and instructions. The mess holder on the side of the speeder can be removed, but the salvaged parts cannot. Another cool detail is the spoilers on the back of the Speeder; they’re completely articulated. There’s a button in the center of the message holder, press it and a weapon will pop up. Press the same button again and missile shoots out the front.

The Rey figure is really nicely detailed. She has her goggles, her lightweight outfit, boots, and a pouch. The action figure pegs into the footrest of the Speeder and her hands slide onto the handlebars. Her legs and arms move back and forward, but unfortunately, her head does not. Her weapon can be attached to the Speeder or she can wear it crossbody. It’s a fantastic toy with lots of playability. Recommended for ages 4+ and retails for $24.99 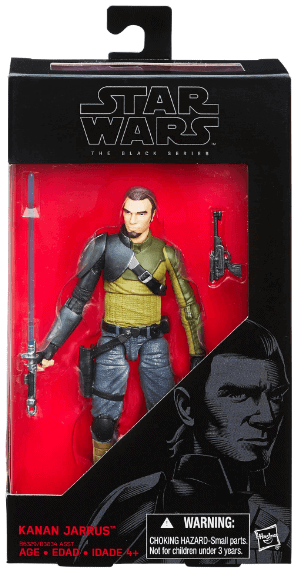 If you’re not familiar with Kanan Jarrus, the back of the box will fill you in; he was a Jedi leader among the Ghost crew. Cool huh! This animated figure was carefully translated into a realistic-looking toy, so he looks just like the Jedi hero from Star Wars: Rebels. He morphs very well with the rest of the movie action figures, and Kanan is decked out for battle. 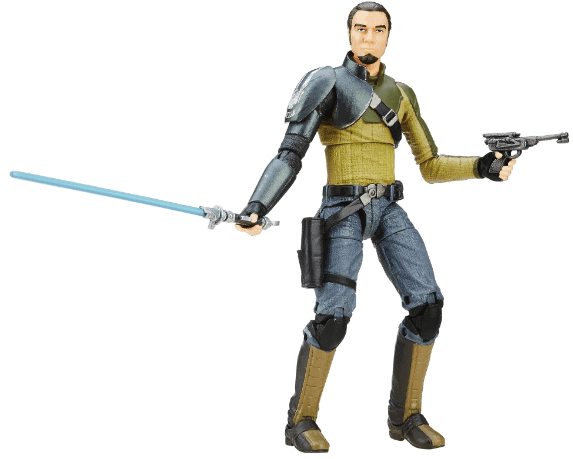 This Kanan Jarrus action figure comes with a blaster and a lightsaber. He has a ponytail, goatee, sparkling blue eyes, and a self-assured countenance. It really looks like Kanan is wearing textured leather pants along with a textured shirt with leather trim. He has an armor piece over his right shoulder and down along is right arm. He also has a black belt with a weapon holster that contains a removable blaster inside. He has knee pads and his signature two-toned boots.

He articulates very well and has a great range of motion. Kanan’s head turns from side to side and forward and backward. His shoulders move and he swivels at the elbow and wrist. He also has swivel joints in his torso, hip, knees, legs, and ankles. The blaster and the lightsaber fit nicely in either hand. He’s a toy that’s ready for action.

Kids enjoy creating their own intergalactic battles and collectors probably have to use The Force to avoid opening these incredible toys. Star Wars toys never get old.