Star Wars is one of those epic film series that has a life of its own. I can remember as a kid going to the theater and watching these masterfully made sci-fi movies and being completely mesmerized. Fast forward a few decades and the interest is still fresh. In addition to several remakes and releases of the Star War series, new and exciting toys have been made by none other than my favorite toy company, Hasbro! New on the block is the Star Wars Command Star Destroyer toy. 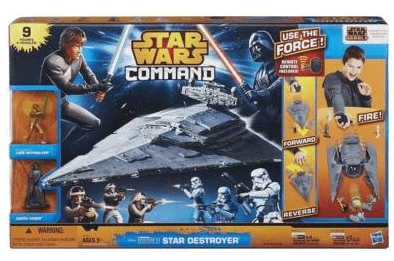 You are in total command of the universe with this toy. You get to create heroic battles and unleash the power of the force to control the Imperial Star Destroyer. 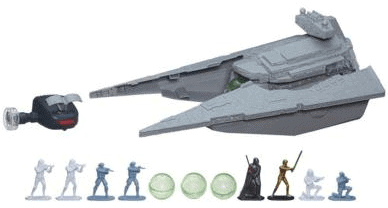 This very cool starship is battery operated and requires 4 AA batteries, which are not included. It has a remote control that allows you to move and maneuver the ship into any battle scene successfully. Hold your hand up, press and the ship moves forward, hold it down, and it will go backwards and turn. To fire the Energy Blasts, turn your hand over, press and stand back because its destiny is the rebel force. Only Luke Skywalker can bring the Empire and Darth Vater to its knees, and this toy allows you to manifest this reality.

This is a well-made toy that has tolerated lots of typical playtime handling. The starship and figurines are not just for bigger kids, they’re a perfect size for small hands too. I was really surprised that they actually have a lot of detail to them. The kiddo’s played for hours and hours totally wide-eyed and focused on battling the dark side and always manage to come out victorious, even though they’re outnumbered.

Another generation playing with these new adventurous toys, Star Wars just never gets old. Now is the perfect time to stock up on these coveted toys. I know it’s on lots of kids wish list and Christmas is only six weeks away. May the Force Be With You!