The Star Wars space saga has entertained the world since May 25, 1977, and I’m one of them. Since then it has morphed into a franchise that has become a living, breathing, Jedi entity. The release of The Force Awakens and Rogue One has not only quenched original followers intergalactic thirst, but it’s also hooked a new generation of Star War disciples.

My family loves Star Wars. We have all the movies to date, and each of us has our favorite characters. Some of my family members like to collect Star Wars merchandise, and Hasbro is always the first place to look. Hasbro is up to date on Star Wars collectibles, toys, and games and several new items hit the market just in time for Christmas. 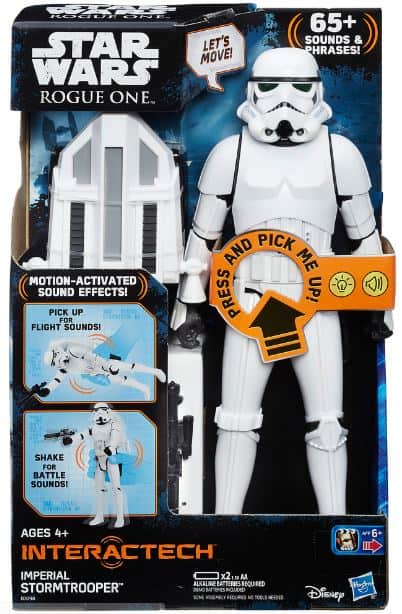 The Imperial Interactech Stormtrooper action figure is from the movie Rogue One. They are a group of elite and loyal soldiers devoted to the Empire. This action figure is 11 ½ inches tall and comes with a realistic blaster rifle that snaps onto his hand and a super cool jetpack that snaps on his back. Press his belt to activate him up and shake to hear battle sounds. The stormtrooper speaks 65 + phrases and also makes Imperial sounds. His arms, legs, and head move full range. 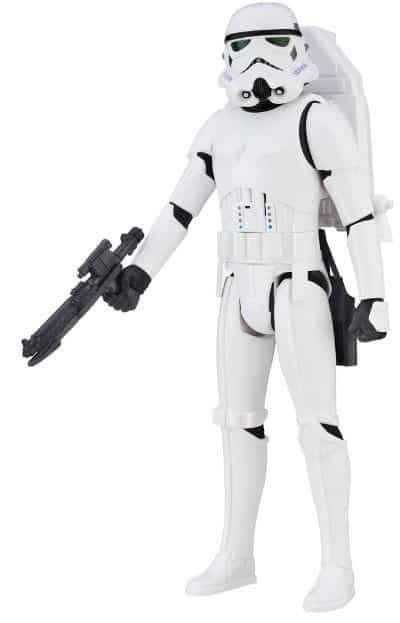 There are several different modes, attack, and flight, plus a dual-mode that includes both. Each move will have its own set of phrases. His chest has an indicator light that will share which mode it’s in. The Stormtroopers are motion activated and change sounds and phrases according to the accessories attached. Incidentally, this toy comes in English and French-speaking; each version is sold separately. This toy is recommended for ages 4+ and retails for $40.00 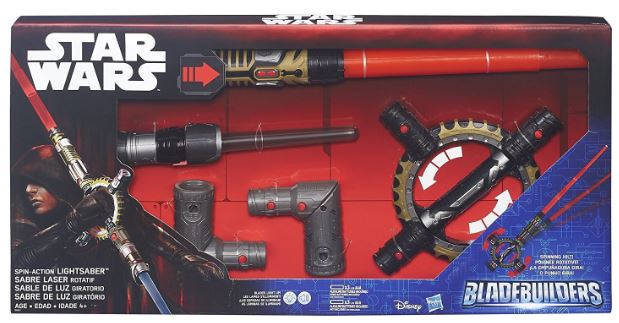 The lightsaber is the weapon of choice among the Star Wars elite, including Jedi Knights, Sith Lords, Stormtroopers, X-Wings, Star Destroyers, AT-AT Walkers, droids, Wookiees, Rebel heroes, and more! The Spin Action Lightsaber kit will have your young Jedi ready for battle.

The Spin Action Lightsaber comes with a spinning hilt and a sound-making an extendable red lightsaber, a light-up light dagger, two adjustable spinning connector pieces that pivot from straight to right angles, and instructions. All pieces can be connected together to create a large custom-made lightsaber. With its unique spinning hilt, this feature takes the lightsaber to a whole new level with its rotary-style center, making the lightsaber easy to spin in the air.

The kids are having a blast playing with this toy; it’s fun to build and even more fun to defend our home!

WARNING: CHOKING HAZARD-Small parts may be generated. Not for children under 3 years.
Ages 4 and up. Retails for $60.00

Disclaimer: I received products to facilitate a review. All opinions express are my own, yours may differ.