The legacy of Star Wars continues…

Darkness rises…and light to meet it. Star Wars: The Last Jedi has arrived!

In The Force Awakens, we were introduced to several new and captivating characters — BB-8, Rey, Kylo Ren, Finn, Poe Dameron, General Hux, Unkar Plutt, and the adorable Maz Kanata. Many of them feel like old friends now and they have a soft spot in our hearts. There are also a few new characters in The Last Jedi which include Vice Admiral Holdo, Rose Tico, and her sister Paige, a code hacker named DJ, and cute little critters called Porgs. I can’t wait to meet them on the screen, but more importantly, welcome them into my home with Hasbro’s new Star Wars toy line.

Hasbro is always on top of its game and they’ve just come out with the coolest interactive Star War toys ever. With their new Force Link wearable technology, it activates lights, sounds, and phrases on various Star Wars characters and toys to deliver a play experience that brings Star Wars stories to life like never before. Check out some of these awesome toys. 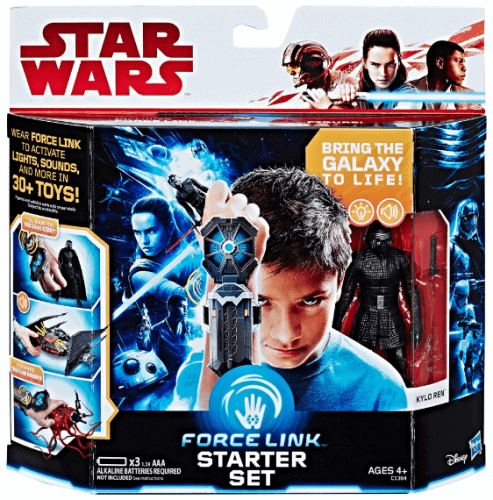 The Star Wars Force Link Starter Kit is the real force, the magic, the bones behind this wearable technology and you must have it to activate and interact with the toys. Kids can bring Star Wars into their homes when they wear this Force Link wearable technology. It activates motion-controlled lights, sounds, and phrases in Force Link-activated figures, accessories, vehicles, and playsets in the 3.75-inch line!

Now kids can strap the Force Link onto their wrist and create new adventures in a galaxy far, far away. They’ll hear authentic phrases from each of Force Link-activated characters. Just hold or wave your hand over one of the toys and you’ll hear its corresponding sounds. Kylo Ren says: “Show me again, the power of the darkness”. “I’ll let nothing stand in the way”, and a few other phrases and sounds. The wristband is adjustable to fit both kids and adults.

The Force Link does not have an on/off switch, but will automatically go to sleep when not in use. To activate it again, just tap on the main body and it will light up. Recommended for ages 4 and up. WARNING: CHOKING HAZARD-Small parts. Not for children under 3 years. Retails for $39.99 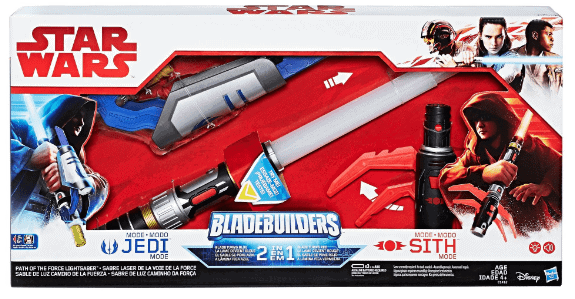 The Lightsabers are the weapons of Jedi Knights and have also been used by the Sith and other Force-sensitives. It can be used to cut through blast doors, droids, or enemies alike. The Bladebuilders comes with a lightsaber, 2 connectors, and instructions. Requires 3 AAA batteries, not included.

The Path of the Force Bladebuilders Electronic Lightsaber allows kids to choose their path — the Force or the Darkside. It features outstanding light and sound features for any battle action that awaits all young Jedi. Choose from Mace Windu, Rey, Darth Vader, or Luke Skywalker. Kids can enjoy the effects and imagine battling on the side of the Jedi with included Jedi blue light connector piece, or wield the lightsaber on the Darkside with the Sith red light connector! You can switch connector pieces easily to fight with a blue Jedi blade or a red Sith blade.

You can also customize your lightsaber by pressing the button on either the Jedi or Sith connector piece to expand the hilt! Combine with other Lightsabers in the BladeBuilders system (each sold separately) and imagine the thrill of battle as you take down the rebels. For ages 4+ and retails for $69.99. 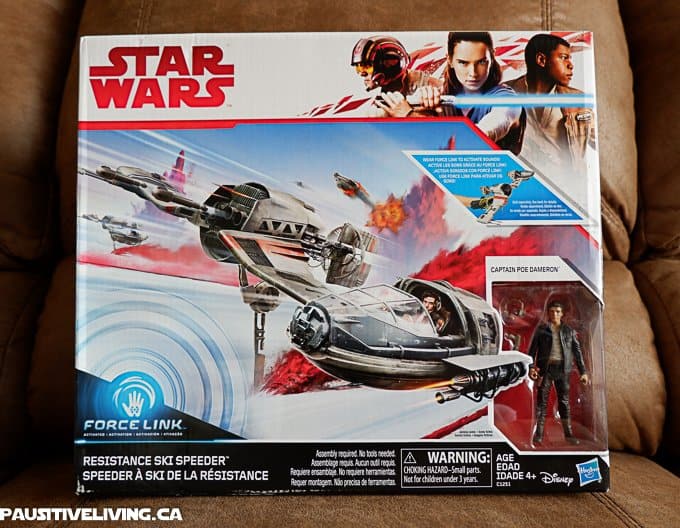 The Rebel Alliance depends on their transports to get them out of danger quickly so they must be super fast, maneuverable, reliable, and loaded with weapons. The Resistance Ski Speeder is a low-altitude, high powered assault vehicle that’s manned by one pilot, Captain Poe Dameron. Because it’s an older design predating those of the Rebel Alliance, it requires a skilled pilot like Poe to fly it.

This speeder is 17 inches wide and it uses a stabilizer strut to keep it in balance while racing through alien terrain. The kit includes a vehicle, figure, accessory, projectile, and instructions.

The Resistance Ski Speeder has a lot of nice detail on the body, and it’s even weathered in various spots to make it look like it’s seen many battles. The missiles fire when you press the trigger and the landing gear moves up and down. The cockpit is for one pilot only and comes with a seatbelt. The hydraulic looking legs pull out from under each wing so the speeder can stand on its own. Press the big button on top of the missiles section and it will eject the right-wing off for a cool battle effect.

The Poe Dameron figure is 3.75 inches tall and comes with a blaster, holster, and headset. The details on the Poe character are amazing and his jacket is flexible and feels like supple leather. His jacket also dons a Resistance Rebellion symbol on one arm. He also has great articulation, his arms and legs move up and down and his head can turn left and right. The Force Link Symbol is on the bottom of his foot. Kids will enjoy hearing various battle noises and Poe phrases — “Now we have a chance.” To hear another phrase just tap the Force Link. Recommended for ages 4+ and retails for $49.99. 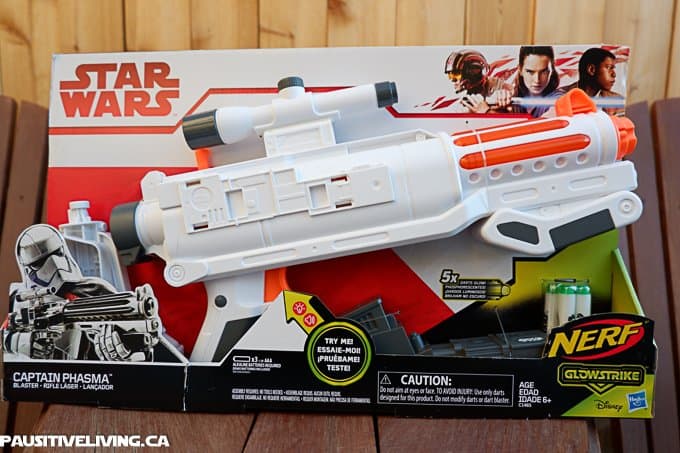 We were introduced to the female Captain Phasma in The Force Awakens. Clad in distinctive armor of salvaged chromium, Captain Phasma commands the First Order’s legions of stormtroopers. She’s tough and not afraid to use brute force and blasters to take down the Rebel Alliance. The Nerf Captain Phasma Blaster is a replica of her weapon in The Last Jedi movie and it’s really cool. The kit includes a blaster, pack attachment, stock, 5 darts, and instructions. 3 AAA batteries are required to set this baby in motion – not included. Some assembling is required.

The new Nerf Captian Phasma Blaster will allow kids to fire away with glow stripe darts. Load the darts into the drum cylinder and prime the weapon by flipping down and pull back the orange retractable bolt. Each time you prime the cylinder will glow, making after dark battles possible. Press the trigger and you’ll hear blaster noises and the darts will shoot out to about 40 – 45 feet. Recommended for ages 6+ and retails for $59.99.

Worlds collide as the Resistance and the First Order go head to head in the latest Star Wars battle! Each 3.75-inch figure features five points of articulation and comes with unique battle accessories. Characters include heroes and villains from STAR WARS: THE LAST JEDI such as Rey (Jedi Training), Finn (Resistance Fighter), Luke Skywalker (Jedi Master), Resistance Tech Rose, Chewbacca, C-3PO, Kylo Ren, Poe Dameron (Resistance Pilot), and more. Activate an array of lights, sounds, and figure phrases specific to each character with FORCE LINK gear! They are compatible with all products in the FORCE LINK line, each sold separately.

Each of the Force Link activated characters are extremely detailed and come with an accessory or two and instructions. The articulation is good; they can move their arms, legs, and turn their heads. The accessories attached nicely and stay in place while in action. Put on your Force Link wrist technology and listen to what each character has to say. Each will say 3 phrases, even Chewbacca. Star Wars Force Link toys make interactive play so realistic. Kids will feel like their part of the Rebel Alliance and do their part to take down The First Order. 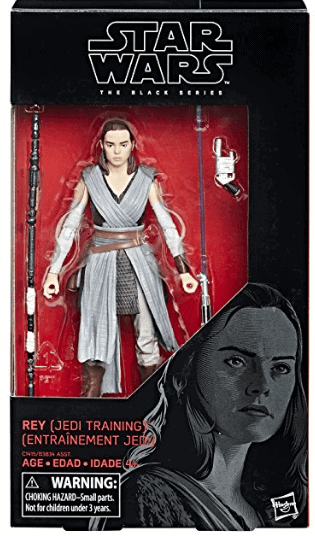 Also available is the Star Wars Black Series line of toys. This 6-inch-scale Rey (Jedi Training) figure is carefully detailed to look like the heroine from Star Wars: The Last Jedi. This figure features premium detail and multiple points of articulation and includes 3 accessories specific for her character. Kids and fans alike can imagine the biggest battles and missions in the Star Wars saga with figures from Star Wars The Black Series! With exquisite features and decoration, this series embodies the quality and realism that Star Wars devotees love.

With 6-inch figures from Star Wars, The Black Series kids and collectors alike can expand and enhance their Star Wars collections (Each sold separately).

May Be The Force Link Be With You!

Disclaimer: I received The Last Jedi toys to facilitate a review only. All opinions expressed here are my own.