Star Wars is just as popular today as it was way back in 1977. During the many years since its onset, numerous Star Wars films have been made and we’ve become attached or have fallen in love with many of the characters. My favorites are more the non-humans like Yoda, Jar Jar Binks, R2D2, C3PO, BB-8, and my very, very favorite Chewbacca — Chewie to his friends. 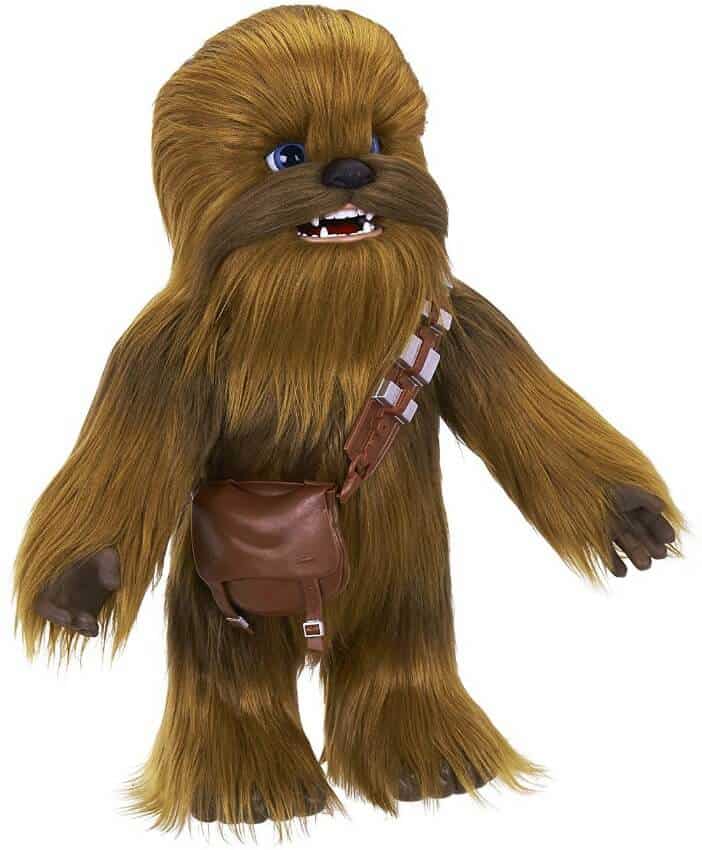 Chewie is a Wookie, a legendary warrior, a rebel, and Hans Solo’s loyal co-pilot. They flew the Millenium Falcon through many battles and heartbreak. Everyone in my family was so sad when Hans Solo died, you never see these things coming. Now Chewie continues his fight to restore freedom to the galaxy as Rey’s co-pilot.

If you’re a die-hard Star Wars fan, you’ll be excited to learn about a new FurReal toy, the Star Wars Ultimate Co-Pilot Chewie. He is an adorable Interactive Plush toy with amazing animatronics. Chewie comes with his bandolier, a satchel, and an instruction pamphlet. He really should also come with a brush, his hair was a mess when we took him out of the box. And his fur was also sprayed with a sticky substance that feels like hairspray. It’s really hard to comb through, so not sure why Hasbro decided to do this.

We got a kick out of all the Chewie sounds. He is able to make 100+ different sound-and-motion combinations and various facial expressions. He, of course, only speaks in the Wookie language. The most recognizable sound he makes is his signature roar. When we hear that roar, we know Chewie is near.

If you lift him up, he’ll recognize motion and react with various sounds. Shake him and he’ll make jiggle sounds. Rock Chewie or lay him down and his eyes will close, his arms will lift up and he’ll start snoring. Hang him upside down and he’ll growl and make a lot of complaining sounds. Tickle him and he’ll laugh and chuckle.

Chewie has sensors on his head and tummy. Pat or pet his head and he’ll make content sounds. Press below his tummy and he responds with an assortment of sounds and will lift his arms. The more you play with Chewie, the more sounds you will discover. We just discovered that he also burps and hisses. Now kids can have their own companion or co-pilot as they role-play Star Wars battles. Available on Amazon.