I have been lucky enough to have traveled throughout Europe several times. If you’ve been there, you know the lifestyles and cultures are completely different from North America. They are more laid back and hallmarked with abundant and diverse traditions.

Aside from taking in the breathtaking and picturesque scenery, we really enjoyed stopping by the quaint bistro’s, charming cafe’ and oompah filled beer halls. Getting to taste and savor the flavors of Europe added a whole new perspective to our culinary experience. There were some dishes I wish I could have taken home.

When I received the “The 30 Minute Vegan’s Taste of Europe” cookbook I was flooded with fond memories and aromas of my time in Europe. This cookbook has 150 vegan recipes that reflect the very essence of European cuisine. It has recipes from Italy, France, Spain & Portugal, United Kingdom & Ireland, Germany, Greece and has a chapter called Europe Fusion. 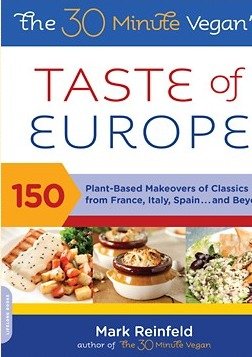 I’ve been lucky enough to grow up with some family recipes like homemade perogies and cabbage rolls. Trying them in Europe really was a wonderful experience. If you want to broaden your taste buds, this cookbook will impress you and rock your palette.

I dove right in and found recipes that were reminiscent of my time in various countries. Being a vegan I had most of the ingredients this cookbook called for but there may be some like arrowroot powder you will have to go out and purchase.

It was fun making the Currant Scones, a Scottish recipe, which only took 15 minutes to bake. They were quick to whip up for breakfast and afternoon tea. I love borscht and really liked the recipe found in the European Fusion section. This recipe called for different ingredients like tamari sauce and celery seeds which I haven’t used in borscht before. It was so easy to make and it was on the stove in less than 30 minutes. This authentic-tasting recipe will hit the spot on a cold snowy day.

My father was German so it was only natural I explored Germany quite a bit. They have a lot of hearty meals and many scrumptious meals a vegan would enjoy too. I love Brussel sprouts so the Brussel Sprouts and Red Cabbage recipe called out to me. It’s slightly sauteed with a nice zinging sauce. One of my ultimate favorite things to eat in Germany was the Spaetzle noodles. They are soooooo good! They, however, make them with eggs so it was really awesome to find this vegan recipe. Top the Spaetzle with a little vegan butter and vegan cheese and you have a perfect meal.

The 30 Minute Vegan Taste of Europe has numerous recipes that I was introduced to that I will be trying throughout the winter. It’s wonderful to have new meal ideas with different ingredients that allow my family to appreciate the culture of another country. It’s a fabulous cookbook that will make a great addition to my collection. There are a few recipes like the Black Forest Parfait and the Swiss Chocolate Fondue that will be perfect for my Christmas get-togethers. Cookbooks make wonderful Christmas gifts.