Wheatgrass – The Green Miracle Nectar, that is a statement many live by. When I mention wheatgrass to some of my friends and family, they scrunch their noses. Granted wheatgrass juice is not the best tasting drink, but it’s healing benefits blow many supplements out of the water.

Wheatgrass juice is a great source of vitamins A, C, and E. It also contains all the known mineral elements and is loaded in enzymes. Wheatgrass is rich in sulfur, calcium, potassium, phosphorous, iron, sodium, cobalt, and zinc. It’s a complete protein and is exceptionally high in B vitamins, especially B17. It contains up to 70% chlorophyll, which is an important blood builder, liver detoxer, blood cleaner, creates an unfavorable environment for bacteria growth, aids in digestion, as well as balancing blood sugars. 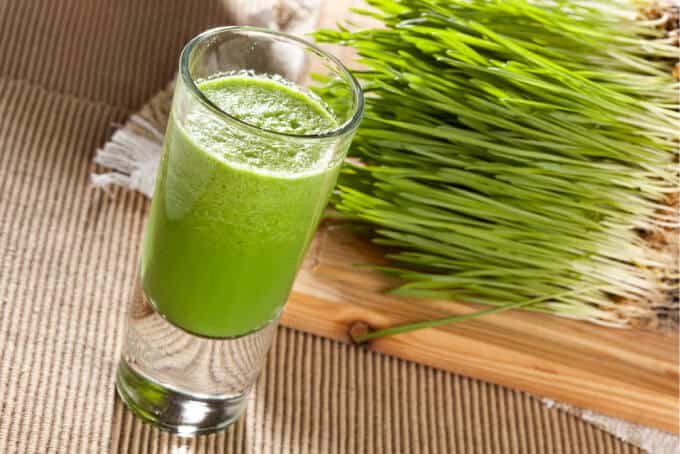 Because Wheatgrass is so potent, you can feel a little nauseous after ingesting it, so start off slow with small amounts. It’s suggested to start with one ounce and work up to four ounces a day. A mere ounce of wheatgrass juice has as much nutritional value as about 2.5 pounds of fresh green vegetables. Once wheatgrass is juiced, it must be used immediately or within 15 minutes as it tends to go bad quickly. For maximum benefit, wheatgrass should be consumed on an empty stomach or if you’re unable to so, combined it in a smoothie.

Detoxifies: Wheatgrass purifies, cleanses, and fuels the body with nutrients by stimulating white blood cells. Daily ingestion will promote the removal of toxins and impurities that are lingering in your body.

Immune Support: Wheatgrass will strengthen and support your immune system while improving your body’s ability to recover, fight, and prevent diseases.

Weight Loss: The chlorophyll in wheatgrass removes toxins and increases our energy so we can work out harder and longer. It’s low in calories and has no fat, sugar, or cholesterol, and helps reduce food cravings.

Treats Body Odor & Bad Breath: Breath mints are no cure for bath breath. Bad breath is usually a sign of a dirty and toxic colon, and chlorophyll helps to remove the toxins. Wheatgrass is also very effective in neutralizing the odors of physical exercise and menstrual odors.

Firms & Tightens Gums: Swishing wheatgrass in your mouth for 5 minutes can eliminate toothaches and tighten up your gums.

Anti-inflammatory: Because wheatgrass has a high alkalinity, it’s good for people suffering from rheumatoid and osteoarthritis.

Anti-cancer: Wheatgrass works as a powerful anti-cancer agent. Oxygen has proven that it kills cancer cells, but wheatgrass is also immensely beneficial in treating cancer.

Stimulates Circulation: Add a few ounces of wheatgrass in your bath and rub in the skin.

Clear Sinuses: Add a few drops of wheatgrass juice in your Netipot to clean out sinuses.

There are numerous other benefits that wheatgrass bestows on the body. It’s the nectar of rejuvenation, it’s the superfood of the soul, so drinking an ounce a day will help your body in profound ways. Wheatgrass can be found in its natural grass state or in pills or finely ground powder. To your health!